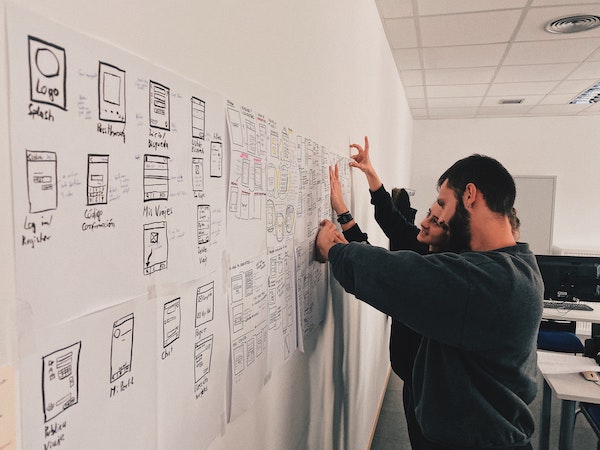 Every TV writer dreams about being part of the team that plots entire seasons and individual episodes of a television series. And for some, it will become a reality. In a few weeks, scripts of each episode will be written, filmed, and subsequently screened. It’s a far cry from the months or years it takes for movies to make it to the screen.

Perhaps you have calligraphic handwriting and you are tasked with writing on the board (or boards) in the writers’ room? They may not all be boards resting on a stand. They may be notes scribbles on eco-friendly butcher’s paper and stuck around the walls to immerse the TV writers into the world of the TV show they’re working on.

What exactly goes onto those boards? Plenty, it seems. So your neat handwriting will finally come in handy.

These are essentially brainstorming boards at the start of each season (or pre-season) before any definite storylines are set in stone. These are broad-stroke ideas about where the TV series of main characters may go or how they may develop over the course of the TV series. There is little filtering at this stage. Blue sky boards, like the others, have a degree of flexibility. They can be updated. So don’t get too precious about your ideas.

These entries can be loosely divided into levels of likelihood of occurring – possible, probable, and nice to have. It all depends on the showrunner and networks.

These have little to do with the content of the show, but more with the feel of the TV show. Think of mood boards as background music to inspire your creativity. Mood boards are a staple of the advertising industry as a preface to loosely define what might be included in a campaign. Think of your next exotic travel destination. What be on that mood board? Sun, margaritas, climbing a mountain, or reading a book? Consider how each of these images might influence your decisions.

They may contain material such as post-its, quotes, and pictures that highlight the tone of the show. Is the TV series dark, playful, or somewhere in the middle? It may contain some thematically-related material, but they are generally there to ensure that the TV writers’ don’t fall over a cliff when deciding whether something belongs in the TV show. They serve as creative inspiration.

Plotting season arcs with a high degree of specificity helps keep your TV writers on track. It gives them a goalpost to writing toward. Otherwise the planned marriage might end up becoming a ski trip.

These boards are derived from the season arc boards and contain the main plot beats in terms of A and B stories. Sometimes they contain C stories, sometimes called runners – occasional scenes that run throughout the series. A and B stories are slightly more important in serialized TV shows because each episode isn’t entirely closed-ended but must organically flow into the next episode.

Episode outlines are also useful to production staff when they plan shooting schedules.

These stem from previous boards and contain the main relationships and critical incidents that define the main characters. As in your screenwriting, character arcs depict periods of change, transformation, and growth.

These contain the names of main, secondary, recurring, and guest characters that might appear in the season along with the dramatic roles. If there are old characters who appeared in previous seasons and make guest appearances on the TV show, they go on this board too.

Character boards are useful in collating the names and dramatic functions of each character. For instance, if grandma Ellen comes to visit in episodes eight, her level-headedness, stellar cooking skills, and her cat named Mittens will go on this board.

Character boards are also helpful in the casting process because they help determine which characters appear in a scene.

Casting boards may contain the actors in the regular and recurring characters, but they are more often used to list potential actors and their availability for certain episodes. The list may contain actors who’ve expressed an interest in the show to confirmed actors. They may be guest actors or they may have a prominent role in upcoming seasons.

Casting boards are also useful for mashup or crossover shows typically produced by the same network.

Are there any catch-cries or character-specific words or phrases that must be included in scripts? This is the board for that. It also contains lingo and jargon that reflects the vernacular of a particular community ranging from Bazinga to Did I Do That?

Are there any industry-specific terms that writers must understand? These can include legal, medical, and technological terms. These are developed in conjunction with an industry liaison to ensure that the terms are authentic and organic. After all, you wouldn’t want to confuse your plaintiffs with your plantains. Case dismissed.

Many comedy writers’ rooms have a joke board. They can range from the kernel of an idea, or a setup of a joke, to a completed ready to go gag. Sometimes a joke may not naturally fit into the flow of an episode but can be used later in the season. Other times, a joke may be completely wrong tonally, but there is something comedic in it making it difficult to discard outright. Perhaps it can be remolded into a more suitable one?

These are the money shots. The elaborate, time-consuming scenes that eat up a large chunk of the production budget. For instance a house fire or car crash. These action boards are more designed to keep the budget on track than the story.

These boards are useful when planning stories around atypical, non-standard sets. A producer may have limited access to the White House, or a train station when it’s closed. If the show has irregular or one-off access to a location, it goes on this board. It helps both the writing and production staff equally.

These boards are also worthy of mention. Specials boards could relate to annual events such as a Christmas or Thanksgiving special. They may also be used for major international incidents or public awareness such as a social distancing or cyberbullying episode.