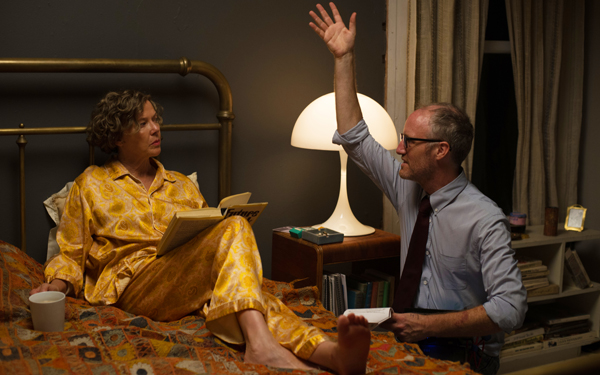 “What guides me is the real person.” Mike Mills on 20th Century Women

20th Century Women writer/director Mike Mills’ previous film, Beginners, told an endearing story about a son reminiscing on the final years of his father’s life, during which his father came out as gay after more than forty years of marriage. Beginners won critical acclaim and made Christopher Plummer the oldest-ever winner of a competitive acting Oscar when he won for Best Supporting Actor.

Mills based Beginners on his own life – like Plummer’s character, Mills’ father also came out late in his life. And in the same way that Beginners was about Mills’ father, his latest film, 20th Century Women, is about his mother and the other women in his life.

Annette Bening stars as Dorothea (a character inspired by Mills’ mother), a free-spirited, middle-aged single mother, who as the 1970s crawl into the 1980s, believes she needs help raising her teenage son Jamie (Lucas Jade Zumann).

Jamie’s confusing teenage existence is also influenced by Abbie (Greta Gerwig), a boarder at their house who attempts to teach Jamie about feminism, Julie (Elle Fanning), a classmate and neighbor whose sexual promiscuity puzzles Jamie, and William (Billy Crudup), a handyman who is something of a lost male soul himself.

Mills’ career as a filmmaker began in the 1990s with a series of short films, commercials and music videos stemming from his career as a graphic designer. His narrative feature debut as both a director and screenwriter was 2005’s Thumbsucker, which Mills adapted from the 1999 novel by Walter Kirn. His films have become festival favorites, with Thumbsucker premiering at Sundance, Beginners premiering at the Toronto International Film Festival, and 20th Century Women premiering at the New York Film Festival.

Creative Screenwriting spoke to Mills about his mixed-media approach into his screenplays, writing about his personal experiences, and why plot doesn’t hold his attention as much as other aspects of a film.

Mike Mills on location for 20th Century Women. Image courtesy of A24.

Can you talk about the genesis of the screenplay, and why you decided to write about this era?

It comes from my personal life. It’s really a portrait of my mom, and the Greta Gerwig character is based a lot on my sister. I also knew a lot of women like Elle’s character, Julie. That was the time when I was that age, and my mother was around Dorothea’s age. I liked talking about that moment in our shared history between my mom and I, when she was 55 and I was 15.

I also feel like the world of Jimmy Carter and the beginning of Punk, and the pre-digital, pre-Internet world is gone. I really found that interesting to talk about and bring back.

As a character, Dorothea both reflects and contradicts a woman of her time. Can you talk about writing her?

With all these characters, what guides me is the real person. Of course, I’m cinematizing real people, and you can never get them right or show all of their dimensions, but that’s very much what my mom was like. She was very bohemian and progressive, yet at the same time she was a person who was born in the 1920s and didn’t like to talk about her inner life or feelings. She thought that if you were asking about her feelings, it was an invasion of her privacy.

She was filled with contradictions, and that was something I was really trying to capture.

It’s also how I judge my own work. If I am capturing something I have seen or observed, and work on it in a bit of a journalistic way, that’s what guides me and lets me know that I’m going about it on the right path or not.

Annette Bening as Dorothea and Lucas Jade Zumann as Jamie in 20th Century Women. Photo by Merrick Morton, courtesy of A24.

Both Beginners and 20th Century Women are stories that reflect your personal history. How do you ensure that stories based on your own personal experience will reach an audience effectively?

The goal is to tell a story for people who don’t have that exact situation in their lives at all. I’m very inspired by people like the Hungarian director István Szábo. He did a film titled Father (1968) and a film titled Lovefilm (1970). I love those films, and I know nothing about growing up in Budapest during World War II. But I can completely relate to them because they’re very concrete and specific about his life.

I do believe in writing for other people. I’m not trying to do therapy or make a memoir; I’m exploiting personal things to make what is hopefully a unique film. I take from my life to hopefully make a good movie, not a good memoir.

20th Century Women is very episodic. Why did you write it with a loose plot structure?

I love a lot of films that do that. To me, it’s a very open feeling.

I’m not super-interested in what’s called naturalism. I find that to be a convention and construct in itself. I think when you can attack a set of themes or a group of people, and you’re making a portrait from different angles, different perspectives, and even different protagonists, it makes it break open in a way that’s exciting and enables you to get into deep things in a more angular, muscular way. I love Fellini’s Amarcord, and that’s even much more gaseous.

Plot is the thing that I respond to least when I am watching a film. I feel manipulated in a way that I don’t appreciate. That doesn’t mean I’m plot-less, but it’s obviously not the thing that gets my main attention as both a writer and a viewer.

Lucas Jade Zumann as Jamie and Elle Fanning as Julie in 20th Century Women. Photo by Gunther Gampine, courtesy of A24.

At times, both Beginners and 20th Century Women have documentary-like constructions, with photos, archival footage, and voiceover narration. Was this represented in the script, or does that develop during shooting or editing?

That’s all in the script, and even a lot of the exact visuals are put into the script. I went to art school, so thinking of objects of design, culture, books, texts, movies, is part of my toolkit and comes very naturally to me.

A lot of those lyrical essays I do as dual dialogue, and on the left side of the page I do the narration and the right side I list all the visuals because they go by quickly. It’s all part of the plan.

How did you know when your script was ready to show to others?

Both of my previous screenplays took two or three years. A lot of that is spent doing the research. I start in such a non-formulaic way. I’m sort of hunting and searching and it slowly congeals until it’s like a body.

The main way I know that it’s done is when I’ve shown it to a lot of people, and I start to get a certain amount of consensus and critical mass, where people are interpreting it in a similar way. Even if they see problems, they’re the same problems. Then I know I have a thing that’s up and running. Because it is important to me that it is communicating to others.

Usually after two or three years I’m so exhausted writing it I want it to be over! [Laughs] I can’t wait to meet actors. It’s mostly how I sense it’s going over with other people, and I have an intuitive sense when it’s enough.

Then when the actors get involved, it comes to life again because you’re not alone. The real burden of writing is how alone it is, and how much failure is required on a daily basis. You need the stamina to weather that. A year is easy. A year is fun. Once it gets past a year, it’s really depressing.

Mike Mills and Elle Fanning on location for 20th Century Women. Image courtesy of A24.

Since you direct your own screenplays, do you find yourself rewriting depending on casting, or during shooting?

Definitely. I really like to customize the script for the actors. It’s not by much, but little tweaks.

More than changing it, it’s usually adding stuff. My rehearsal process involves a lot of improvising with the backgrounds of the characters, kind of like a Mike Leigh process, but obviously not as intensive. We spend two weeks focussing on everything that led up to the story, and try to find different ways to experience that.

Sometimes I interview the actors in their characters. You often find out very interesting things that really galvanize your actors and get under their skin. That’s a part of my process, in not just making a personal movie but also a well-acted movie that hopefully can speak to other people.

On set we do a little improvising here and there, or I’ll ask the actors to do a certain line differently in each take just to make the scene come to life. Then the actors don’t know what’s being said, and the person who’s looking doesn’t know what’s going to happen next. It sort of turns all the lights on very brightly. So there are little changes all the way through.

Your characterization has become stronger since Thumbsucker. How do you inhabit your characters and find their voices?

Again, these are all people I know, and that really enriches the characters. Like the kid in the film, I grew up with a strong mom, two older sisters, and mostly with women. I spent most of my life having women be in charge, and being the most interesting people in the house. I’ve spent most my life trying to figure out women from an outsider’s perspective, and to try to understand what they’re thinking, or how to get along, or how to be in their good graces. Actually, it’s often easier for me to write female characters than to write male characters.

Annette Bening as Dorothea in 20th Century Women. Photo by Gunther Gampine, courtesy of A24.

Everybody asks that. It doesn’t have to be my family, but I do like the idea of finding real people and either being able to interview them or get details of their lives. I really do believe that little concrete details, very specific moments, and things that get outside the way we usually formulize people and characters, are the most exciting nuggets that really communicate to the audience. I could see doing a process like that.

Would doing a biopic interest you?

In addition to a filmmaker, you’re an artist, photographer, musician, and so many other things. What do you feel you can achieve in screenwriting and filmmaking that you cannot in other media?

It’s definitely the biggest stage, and it has the most diverse audience. It’s a more diverse and bigger audience than you can meet in the art world, where you’re kind of preaching to the converted.

Film can also absorb everything I’m interested in. Everything I can do – all the different mediums I work in – I can put into film. Film, like music, works on a very emotional level and often on a very unconscious level. There’s something very powerful about dealing with something that has such emotional potential.