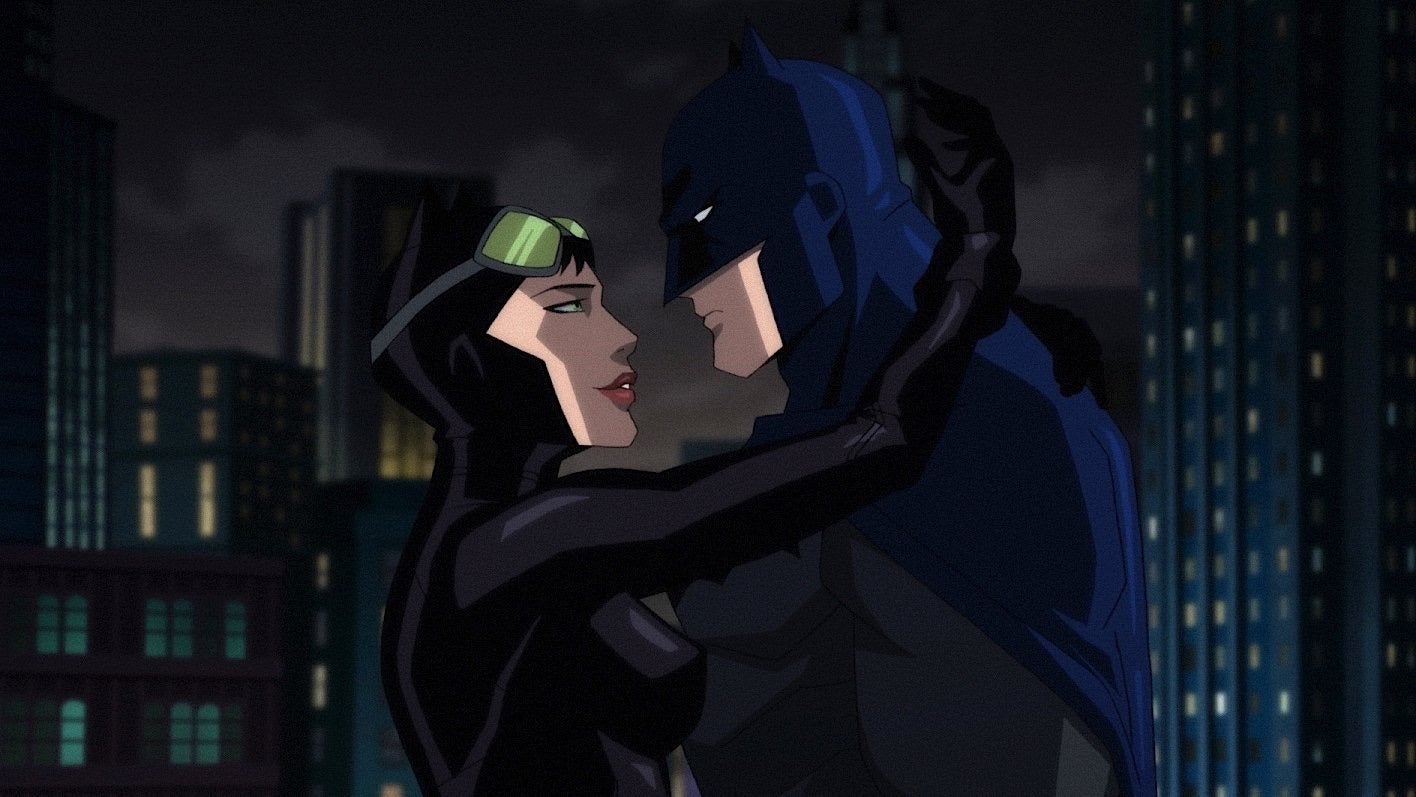 Batman: Hush, the new animated Batman movie that hit VOD last Tuesday, is flawed and missing a lot of the narrative that made Jeff Loeb and Jim Lee’s graphic novel so exquisite. Still, even with a truncated running time of only one hour and twenty-one minutes, and an ending different from the comics, it still captures the whole Batman zeitgeist better than any big-screen efforts. There is plenty to laud in the Batman films by Tim Burton and Christopher Nolan. (The works by Joel Schumacher and Zack Snyder? Not so much.) But none of the Cineplex live-action entries can hold a candle to Warner Bros.’ animated resume regarding the Caped Crusader.

In fact, since the premiere of Batman: The Animated Series in 1992, the WB animation department has produced one outstanding television series after another about the superhero. Developed by Bruce Timm and Eric Radomski, the neo-noir animated show stands as the truest and best version of Batman to appear on either the big or small screen. The three-year series combined the strongest elements of the following source material: Bob Kane and Bill Finger’s original creation, Frank Miller’s reimagining of the franchise with his landmark graphic novel The Dark Knight, and Burton’s big-screen films. The series created a moody but fun franchise that always stressed character and cleverness over violence. It won multiple Emmy’s, and its stature has only grown over the years with audiences and critics alike.

As Timm, writer/producer Alan Burnett, and talents like Paul Dini brought other animated Batman’s to the screen over the next decades, they proved time and again that they “got” the character better than any others. Now, after a half dozen additional animated series, everything from Batman Beyond to The Batman, the Warner Bros animation department is creating one-off films directly for VOD that are making a killing and getting great notices too.

Their latest is Batman: Hush, and it has all the hallmarks of the previous animated versions. It’s smart, lean, and well-drawn, with a distinct emphasis on character-driven action and dialogue. Granted, this latest effort would have benefited from a longer running time to fully incorporate all the brilliant zigs and zags in Lee and Loeb’s original plotting. Yet even with its shortcomings, the film plays a lot better than anything Zack Snyder brought to the franchise. And even though it trades in the original ending for a more muted one, Batman: Hush is a tense, exciting, and quite moving Batman adaptation.

So, what is it that has made the animated Batman’s so much better than almost all of the live-action ones? These five key components distinguish the animation efforts and render them far superior.

1) Batman is a Dark Knight, Not a Dreary One

Noir may be dark, but it doesn’t have to be depressing. So why have so many who’ve taken on the Batman role played him so drearily? George Clooney’s take was too glib and milquetoast. Christian Bale’s growling voice made Batman seem more like a caricature than a character. And Ben Affleck exuded an overwhelming sense of fatigue in almost every scene. If Affleck couldn’t work up the energy to play the part, how could any audience hope to be swept along by the adventure?

In stark contrast, Kevin Conroy gave his animated Batman performances all the energy in the world to make you believe in Bats and his crime-fighting. Conroy used his booming baritone to provide Batman with confidence and authority, showcasing a hero who was righteous in fighting the good fight. You believed his Batman was a maverick, not some borderline psycho ready for the psychiatrist’s couch like so many subsequent takes have suggested. Batman may play dress-up and lurk in the shadows, but he’s still the white hat. Too often in the live-action versions, filmmakers unjustly painted him as a loon, not too far off the insanity of the villains he chased after.

2) Bruce Wayne is Equal to His Alter Ego

Hard to believe, but the only Bruce Wayne who came close to coming off as a full-rounded character in any of the big-screen efforts of the last 30 some years was Michael Keaton’s in the 1989 Batman and 1992’s Batman Returns. He may have been too quirky by half, but at least he was entertaining. That was never a problem in any of the animated Batman’s. There, Bruce Wayne is just as impressive as Batman. How did the animated filmmakers achieve such a distinction? Simple, they ensured that Wayne never was portrayed as Batman’s polar opposite. Instead, Batman is very similar to Wayne, only pitched up a notch or two. Wayne should never be a schlub, a fake, or a pale imitation. He is a philanthropist and a city leader, not a douche bag or some loser who only lives at night. The animators remember that at every iteration.

3) An Affinity for the Source Material

One reason the animated series is so beloved is due to their devotion to the stories and the characters from the original comics. Burton, Schumacher, Nolan…they all thumbed their noses at a lot of the history. Nolan has been criticized roundly for even writing villain characters that barely resemble their source material. His version of Ra’s al Ghul in Batman Begins was wildly far afield of the original character as written in the comics. His daughter Talia shows up in The Dark Knight Rises, but she’s completely separated from her father, so what sense did that make?

In contrast, every version of Selina Kyle (AKA Catwoman) in any animated WB version has stayed remarkably close to the character written in almost 80 years of the comics. The animators’ take on her in Batman: Hush plays more authentically than any big-screen version. Even in the one-off Gotham by Gaslight, a riff taking place in 19th century Gotham where Batman hunts down Jack the Ripper, she’s a recognizable character. The animation filmmakers’ respect for the DC universe is paramount throughout the televised efforts.

Do you know how you can tell when an action scene is working? It’s when you can easily follow the through-line. Neither Burton nor Nolan is particularly good at shooting cogent, flowing action sequences, but the WB animators are. In Batman: Hush, they are working from precise storyboarding. Each shot is meaningful, with each cut adding thrills, not just kinetics. There is one big-screen effort that is equal to the animated series, and it’s 1993’s Batman: Mask of the Phantasm. It was an animated film done by the same WB animators at the peak of the TV series’ popularity.

Batman aficionados know that Ra’s al Ghul always called Batman by the deferential term, “Detective.” After all, the Caped Crusader is supposed to be one part ninja, one part Sherlock Holmes. The superhero’s little grey cells seemed to be an afterthought in most of the big-screen adventures. They showcase Batman as a skilled pugilist, but very little of his intellectual prowess can be seen. Only in the various animated efforts do you find a 50/50 balance between brainpower and brawling. Maybe that was due to the kid audience and FCC rules regarding their exposure to violence on programming. No matter what was done by necessity, it ended up being a boon to the entire franchise as it forced the character to act with his mind, not just his fists.

Not every animated effort has been a ringing success. The two VOD movies that brought back Adam West and Burt Ward to reprise the characters of Batman and Robin were entertaining, but quite off track from where Warner Bros. had taken the franchise over the past 30 plus years. And the animated version of The Killing Joke was a complete debacle. That darkest of Dark Knight tales should not have been animated; certainly not in the Batman: The Animated Series style.

Still, they weren’t as wrong as the loud, day-glow production design and nippled costumes that Schumacher hoisted upon the franchise starting with Batman Forever in 1995. In fact, pound for pound, show for show, year after year, it’s the Warner Bros animated filmmakers who have most consistently presented Batman in the best light. It would behoove director Matt Reeves to follow their example as he readies his big-screen take entitled The Batman for 2021. Indeed, there’s a lot of great history to draw upon there. Let’s hope he does.