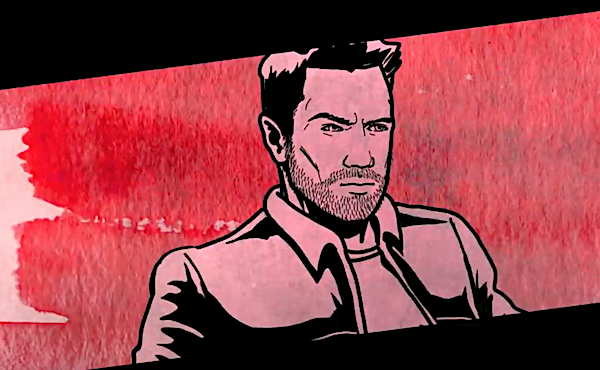 Content creator, Scott Zakarin believes the video/audio hybrid podcast platform offers something for every audience. “My wife only listens to the audio and my kids wait until the video is up,” he said about his new podcast series, Ride Share.

Writing the series with both types of audience experiences in mind poses a unique set of considerations. “You really don’t need the video to enjoy the show,” Zakarin added. “For some people, seeing the whole thing in their head while only listening to the audio is the full experience.”

This approach to storytelling appears new to modern audiences, but it actually dates back to Orson Welles radio shows, like The War of the Worlds back in 1938, or the Superman serials. Ride Share honors the motion comic format from these times.

“The beauty of the format also gives you the opportunity to create any environment you want. You can flip a switch and it’s raining or tires screech,” added Zakarin. “It gives us an opportunity to entertain a certain podcast fan base, but then when we put the audio on YouTube, we crossed the platform to create the audio-video format.”

Zakarin’s extensive background lies in the comic book world, where he’s worked with venerable powerhouses including Stan Lee and Kevin Smith. Inspired by comic books, the creator decided to make something beyond motion comics to create a “moving motion graphic.”

“This expands your audience quite significantly. It gives us the opportunity to express ourselves more broadly.”

Writing For A New Platform

“The difference between writing for a podcast and anything else is you have to organically have the characters tell the story, but have the music and sound effects also tell the story without the help of the visuals.”

Zakarin said this is somewhat the opposite of the movie business, where the goal is to show, not tell the story. “In this format, we have to say it, but not have it sound like,’ Meet me and we will have dinner.’” The dialogue needs to present exposition without being too on-the-nose.

“That kind of expository writing is transparent and takes you out of the story. The challenge is writing a story through dialogue, effects, and music, in a way that keeps the person inside the story.” Additional questions to consider are things like who is in the scene, where are people sitting in the room, and various other visuals that would be obvious in film or television.

“Some podcasts are better than others. Some, I have no idea where the characters are in the scene. So, that’s a big part of the challenge, but I consider it a joy. It’s a puzzle and a very interesting creative endeavor.”

Zakarin has been working on Ride Share for some time now. In fact, he’s credited with creating the first web series, back in 1995. “It’s an opportunity to tell a story using different tools,” he said about the process.

“I can adapt the script, but I can also find where the audience gets confused. It’s so important to be able to write the [character’s] names in the scripts so the actors say them more often. But we have to make sure it’s organic.” The same is true for the cold opens and recaps in each episode, which set up a scene.

Ride Share is an action-adventure story about identity, with a twist. The main character’s name is Keith. The audience doesn’t know his real name which adds to his mysterious background. He often responds, “Just call me Keith,” when asked his name. This way, the writer can reinforce character names in the dialogue while making it sound natural to the story.

Zakarin loves podcasts and believes they’re having their heyday because they’re an intriguing way to focus on a character, but also to multi-task.

“In the case of fictional podcasts, they are transporting audiences in a different way. When you get to play in your mind, you can take an Avengers movie, adapt it for the podcast, and still get a similar experience that allows for grandeur, subtle moments, and all the things you can play with artistically on the big screen.”

For Ride Share, Zakarin created the character Keith (voiced by Eric Martsolf, Days Of Our Lives), who is a dangerous, yet charismatic con man who pretends to be a friendly ride share driver.

“Our plan was to create an anthology series, then see which characters resonated the most with our audience.” Zakarin said a lot of the credit for Keith comes from actor Martsolf who can sound convincing and confusing, all at once.

“You don’t know what he’s going to do next,” continued Zakarin. “I would describe Keith as an anti-hero, but there are aspects to him that also make him a villain. With Keith, you really don’t know what his intentions are. So, the question is, why does this guy demand freedom, and what’s his background?”

The writer sees Keith’s character as a method to pull back the layers. Keith, who could be described as a combination of James Bond and Wyatt (Peter Fonda) and Billy (Dennis Hopper) in Easy Rider, is someone the audience inherently wants to know more about. (The fact that his booming, resonating voice sounds like Barry White is a bonus).

Keith doesn’t need, or necessarily want, what he steals. He loves art. “The art is the con, but he’s impatient. He’s an addict who needs that constant adrenaline shot,” the writer said about Keith. That said, Zakarin also sees Keith as a “vanity movement,” meaning listeners can step into Keith’s shoes and vicariously experience his liberation and true freedom.

“People also appreciate Keith’s cleverness. We like bank-robbers who have a cunning plan. We know Keith’s next con is going to be something unique.” Keith represents the things that bad boys do that we’re afraid to.

The character Lydia (voiced by Britt Baron, GLOW) is another con artist, but she’s focused on the long con until Keith steps into her path. “Lydia is a character that you think is motivated by a normal life. She wants to be an interior designer, but she ran out of patience for people.” Ultimately, Lydia represents patience where Keith represents impatience which makes them perfect partners in crime

Together, these two contradictory but complementary characters see unique aspects about one another. Keith is into short-term cons. Because Lydia thinks on his level, Keith seems to be attached to her through their natural chemistry. .

The Ride Share story actually came from a screenplay that Zakarin wrote thirty years ago. “I’m not proud of the writing,” he joked, “But the core idea of a con couple driving cross country was there. I was always intrigued by that kind of dynamic. If I look at the script, it’s not prime time, but there were cons in there that intrigued me. The idea of ‘what if’ is also very intriguing to me. I’ll fish out stories of ‘what if’ in my everyday life.”

Zakarin will take time thinking about stories or unique “what if” scenarios, where he eventually plugs them into his script. “I’m trying to take those skeleton pieces and put them together.”