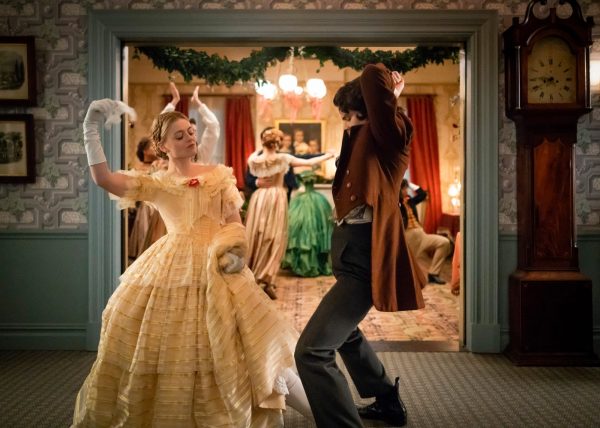 Like so many artists who weren’t appreciated until after their deaths, Dickinson was a similar-fated American poet whose story has been interpreted to the screen by screenwriter Alena Smith on Apple TV+. Smith is also known for writing on the critically acclaimed The Affair and The Newsroom. She spoke with Creative Screenwriting Magazine about adapting Emily Dickinson’s life story for television.

“The central irony of Emily Dickinson is that she wrote almost two thousand poems of some of the most important and revered work in American history, yet almost none of it was published while she lived,” said the writer. Alena was particularly attracted to Dickinson’s inner conflict of her wild inner passion, ambition, commitment, determination, and scope of what the poet was capable of.

Dickinson had almost no external appreciation or validation of the greatness of her work, yet she persisted in her quest to become one of this country’s most prolific poets. “Her life really spoke to me, especially during my early twenties as I was getting my sea legs as an emerging playwright.”

During Alena’s writing formative years, she read Emily Dickinson’s biography and the poet’s unwavering passion in the absence of accolades stuck with her many years later. She was determined to get Dickinson’s story on the screen.

Thematically, Smith wanted to explore the central question of, “What would keep an artist going with such will and passion if it wasn’t about being celebrated?” she mused.

On a deeper level, Dickinson is about, “A confrontation with Death or one’s own limits is necessary for the production of great art.” A story of heeding one’s calling.

A lack of appreciation by the critics wasn’t the only aspect of Dickinson’s life that appealed to Alena Smith. “The irony lies in how limited the poet’s external life was. She lived most of it in one house, didn’t have much formal education, yet she had a tremendous scope in her work.” Dickinson’s expansive imagination was not constrained by the reality she inhabited. Paradoxically, her small life expanded it.

The screenwriter was also attracted to Dickinson’s “dry sense of humor and determination to be radical in her practices, her way of expressing herself, and her secrecy in her writing and her relationships.”

When the screenwriter came to Los Angeles, she did so with Emily Dickinson’s pioneering spirit and grit. Smith knew she wanted to create her own TV show. “I knew I needed an idea that I wasn’t going to get sick of and committed to working on for years.”

The writer initially set out to write an experimental, half-hour, coming of age story about the free-thinking poet. “It would also be a family story and it would have political implications, at an interesting time in America today,” she added.

Alena Smith wrote the pilot on spec before finally showing it to producers Michael Sugar and Ashley Zaita. David Gordon Green was attached to direct the first episode. Along with a three to five-season arc they were ready to pitch their concept to Apple TV+.

Alena Smith is not a documentary filmmaker. She does not like fiction, yet she writes about truth. “I like to begin with something that’s real.  I like to work with recycled material and find new ways to make something new out of it,” she spoke of her writing process.

Dickinson (Hailee Steinfeld) is a biopic of sorts, inspired by the life of a poet. During the development of the TV series, Alena Smith pointed out that there are differences between the real Emily Dickinson and the character in the TV series. Some of these differences were artistic license and some of them were fabricated because specific details about the poet’s life weren’t readily available.

Smith was determined to capture the poet’s writing style in her TV series – “one of artistic clarity and ferocity that captured the paradoxes of human existence. Dickinson’ had an ability to perceive the infinite in the small.”

The show’s creator celebrated the hybrid of period and contemporary hip-hop elements in Dickinson. This was more than a revisionist, self-indulgent expression of other films and TV shows that also utilize this anachronistic device. For Smith, the modern/historical mashup served a far deeper purpose. “American history is currently in such a state of chaotic flux. We are actually in the process of rewriting and writing our own history in order to make it more inclusive of perspectives that have been traditionally left out.”

Dickinson created “an uncanny blur between past and present to get us to think about where we are now.” Alena Smith is not interested in writing about what was true in the 1850s, but rather how that experience relates to the present day. “Writing period is a way of writing a stylized present.” In doing so, Smith could draw attention to these elements, “In a heightened, oblique, fantastical way to truths about ourselves that wouldn’t be as obvious if they weren’t dressed up in period clothing.”

Notwithstanding tectonic inter-seasonal genre shifts, Dickinson’s creator defines the show’s genre with the umbrella term “American Gothic” to best align with Emily Dickinson’s life. “American Gothic encompasses everything from humor to horror to the true emotional pain of drama.”

This creates a unique line the tone of the TV series must walk. In order to keep the genre and tone on track, every draft gets funneled through Smith’s voice. “I always want to be truthfully grounded in stakes and circumstances. I don’t want to become so meta and jokey that you stop taking the characters’ journeys seriously.”

Stylistically, Dickinson also occupies the space of magical realism. The show asks, “What the figure of Emily Dickinson” means.

The romanticized biopic of a reclusive woman in white writing poetry peddled by the Dickinson scholars was turned inside out.

Smith extensively studied Dickinson’s biography and concluded much of it was a myth. The real Dickinson was a “passionate, vital, rebellious, social, needy, complicated force of nature.” Smith ignored the official autobiographies and focused on these traits.

Writing a biopic comes with many questions with regard to how faithful it should be to actual events. “We are almost doing a spiritual biography of Emily Dickinson. We used her poems as a starting point for the show as much as we used her biography.”

Alena stated that the audience most resistant to her take on Dickinson were not the purists, but curiously, those who didn’t know much about her. Despite Smith’s resculpting, Dickinson scholars agreed that, “Almost everything in the show is true.”

Alena Smith described her writing process as a collage. “I grab scraps from Dickinson’s biography and poems and glue them together then sculpt them in funny, odd and interesting ways.”

In the first season of the Tv series, the central relationship is between Emily Dickinson and her father Edward (Toby Huss). “She wins the right to write, but only if she keeps it a secret.” The irony is that her father prevented Emily from writing to protect the family name and reputation, but the reason the Dickinson name is famous is because of her. The father represents the expectations of society and the patriarchy at the time so Emily doesn’t begrudge him. “He’s not wrong in his beliefs because he’s trying to do his job of keeping the family together.”

They shared a co-dependence and antagonism. “It’s a complicated love story between them,” said Smith. Neither character was good or bad.

Emily’s intimate relationship with her sister in law Sue Gilbert (Ella Hunt) was also a feature of the first season. Her passionate love letters to Sue illustrated a bond that defied a typical definition. This parallels current norms in which some people are also resistant to definitions and social norms. Sue was the most important person in Emily’s life in a way that was never going to be officiated by society at large. Then Sue married Emily’s brother and lived next door to them as a way to keep in touch.

Storytelling is more than entertainment to Alena Smith. “Because life imitates art artists have a social responsibility. It’s up to us to write the stories people are going to make a life out of.“