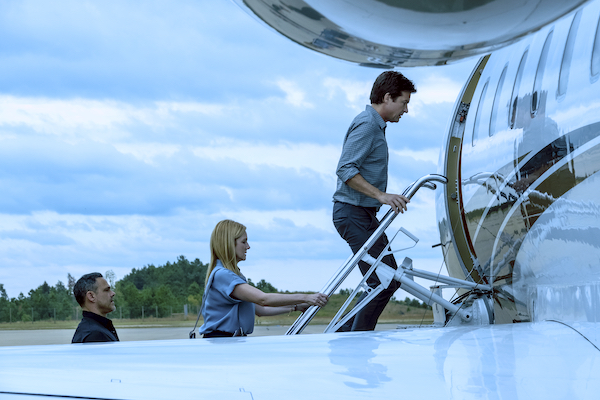 Ozark, the multiple award-winning, slow-burning drama on Netflix depicts the precarious lives of the Byrde family who flew away from noisy Chicago to the relative peace of the Missouri Ozarks to launder drug cartel money as a way to start a new life. We spoke with veteran showrunner Chris Mundy, also known for his work on popular crime dramas Bloodline, Cold Case, and Criminal Minds about keeping the series simmering over four seasons.

As a veteran writer of crime drama, Mundy declared his attraction to the genre comes down to “dangerous stakes. It allows me to explore family, relationships, and class. The genre allows you to be a lot of things at once because you can play your relationship drama in a crime drama.”

Audiences reliably watch crime dramas because they rely on the secrets, masks, questions, and answers the genre entails. “Anyone can get away with murder if you don’t tell anyone. When you open your mouth you create an investigative trail. Exploring who people want to be is at the heart of a good crime drama as well,” stated the showrunner.

The premise of Ozark is both simple and familiar one that needed a particular spin to keep it appealing to audiences. Ozark is ostensibly a money laundering for a drug lord story. That alone isn’t enough to make the show unique.

“It’s a story about a family and a marriage at the heart of things,” expanded Mundy. Money laundering drug money is beyond the scope of most people’s lives, but the stress of married and family life is relatable to most people. “Ozark put a family into an extreme circumstance to make the show compelling.”

Family dramas can traverse a range of genres. “They can be funny, scary, violent, but also sentimental at times. These elements are evident in Ozark. Not always sticking to a particular genre makes the show somewhat unique.”

There have been numerous TV shows such as Narcos and Breaking Bad which explore the drug cartel underbelly. There is a limit to the unique take in showrunning a TV series.

There are certain tropes that must be included and others that can be avoided to make Ozark appealing. Clearly all these crime shows must feature the illegal drug trade as a centerpiece of the drama. We asked Chris Mundy how he made Ozark stand out.

“We steered clear of Ozark being just about the hardening of the heart or the loss of power and love.” Mundy tried to maintain every character’s sense of humanity amid all the craziness happening around them. These elements tap into the vein of the audience to keep them emotionally invested.

“Obviously you need a law enforcement presence for it to be a crime TV series. The Byrde family can’t be working with total impunity. At the same time, Ozark can’t be about the investigation,” stated Mundy. Ozark shows just enough money laundering so the audience can track the Byrdes’ activities, but doesn’t dwell on it.

Despite much of the drug cartel and FBI activity in Ozark occurring in the background, the show’s writers conducted in-depth research, especially during its first season. “We had an FBI agent who specializes in money laundering and a money manager, Marty Byrde’s (Jason Bateman) profession, come and talk to us.” Mundy also consulted with the Missouri Gaming Commission and a lawyer to learn about the legal intricacies of obtaining a casino license.

Chris Mundy explores the richly-textured characters of Marty and Wendy (Laura Linney) in the show. Both equally share the dramatic spotlight as a dramatic unit because “it’s a story of their marriage. Both change in their own way, but they also grow together. We explored the character dynamics through a relationship prism rather than an individual one.”

The origins of the story are noteworthy. Marty wasn’t strong-armed into becoming a money launderer. He willingly made the decision “to prove that he could do it because he was the smartest guy in the room.” It was a choice to fuel his ego and set his family up financially.

Had his partner not skimmed the drug cartel’s profits, the Byrdes wouldn’t have been in the life and death predicament they ended up in. “Wendy signed on for the excitement.” Rather than expand their lives and their possibilities, their decision eventually shrunk them. Paradoxically, their life-threatening danger also kept their marriage and family together when it could have easily pulled them apart.

When their circumstances changed and the stakes are raised, Marty becomes more remote and Wendy “takes control of the situation so they don’t create a new box.” Marty is more conservative in his problem-solving approach by maintaining the status quo while Wendy takes calculated risks to hopefully stay alive.

Marty and Wendy are criminals any way you look at them. The show asks its audience to sympathize with them. Aside from their inherent likeability and love of family, Chris Mundy and his team of writers needed to give audiences a reason for audiences to emotionally invest in their journey. “Seeing people under siege, trying to hold it together, protect their family, and trying to hold on to their humanity generates empathy because they are the underdog,” he said.

Although audiences understand the gravity of the Byrde’s crimes, they also understand why they made those difficult decisions and put themselves in their shoes. “It’s easy to see people make easy decisions, but when they make bad ones, things get interesting.”

Ozark relies on pitting the might of drug cartel Omar Navarro (Felix Solis) against the Byrde family to test the conflict in the story. At times it may seem they have the upper hand on Navarro until he flexes his muscle and brings them down to size. “The Byrde’s will never beat him, but hopefully they can be eventually be released from him.”

The show has a deceptively slow pace to tell its story. “We tell a lot of story and a lot of things happen. But at the same time, our internal pacing is slow.” This pacing is reflected in the filming style which uses many single tracking shots. “We’re not pulling the air out of high action scenes. We keep them slower to make the rhythm feel more like real life. We let them breathe organically.”

At the start of each season, the showrunner discusses the central theme and story arcs for the season with his writers. “We go inside the marriage first in terms of their relationship with each other and their relationship to the world. Then we put each character on the board. When we hit a dead end with one, we discuss what story would satisfy the emotional path of that character.” Within the writing process, the TV writers’ room throws in crazy things that might happen in the season. “We spread out all the ingredients to see what they create and where the intersections are.”

When Mundy is recruiting TV writers for the show, he always prefers to see original writing samples rather than an Ozark spec script. “I just want to know that the writer has a firm control of tone and velocity of the show. I want to sense that I’m in good hands.“