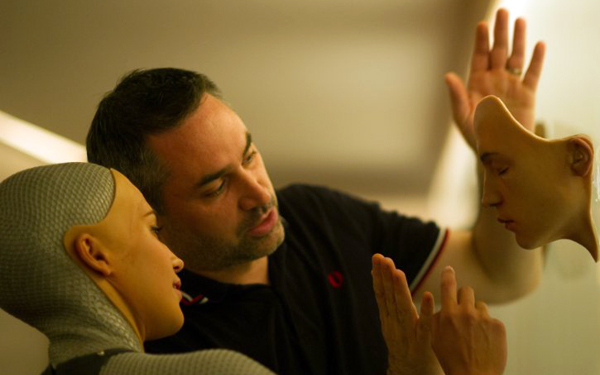 The critically acclaimed 2015 sci-fi psychological thriller Ex Machina might have been the first film by Alex Garland as a writer/director, but Garland has been involved in film ever since his first novel, The Beach, was adapted as movie directed by Danny Boyle in 2000.

After becoming acclimated with screenwriting, Garland wrote two films that Boyle directed, the post-apocalyptic zombie movie 28 Days Later (2002) and the space thriller Sunshine (2007). Garland next adapted the novel Never Let Me Go by his friend Kazuo Ishiguro, which was released as a film in 2010 and also wrote the screenplay for Dredd, the 2012 adaptation of the long-running 2000AD comic character Judge Dredd that became a cult hit for its gritty realism.

While Sunshine, Never Let Me Go, and Dredd were all commercially unsuccessful, critics and audiences took notice of Garland’s fresh approach to familiar science fiction concepts. This gave Garland the opportunity to make his directorial debut with Ex Machina, one of the best-reviewed films of 2015. Ex Machina also won the award for Best Screenplay at the British Independent Film Awards.

Creative Screenwriting spoke to Garland in a career-spanning interview about how he went from novelist to screenwriter, why he doesn’t look too far ahead or too far behind when it comes to his films, his never-filmed script for the Halo movie, and the script for his next film, Annihilation, which is adapted from the first book in The Southern Reach Trilogy by Jeff VanderMeer.

You first entered the film realm when your novel The Beach was adapted as a movie, directed by Danny Boyle. Then you wrote the screenplay for Boyle’s next film, 28 Days Later, and he directed your second credited screenplay, Sunshine.

What happened was when they were making The Beach, I observed from a distance what the filmmaking process was like and I could see that group of guys [screenwriter John Hodge, director Danny Boyle, and producer Andrew Macdonald] had a set up. They were a triangle – a writer, director, and producer team.

I had been writing novels up until that point, and just the idea of a collaboration seemed very attractive to me. It just looked like a lot of fun, really. Initially I was working with Andrew Macdonald, who I still work with now actually, and I said to him that I had an idea for a movie about running zombies.

I wrote it and sent it to him and the two of us went backwards and forwards with it for a few drafts. He really taught me a lot about screenwriting. Then Danny got involved and we ended up shooting it. It was a good learning process for me, and then we repeated it one more time with Sunshine.

When writing a genre script like 28 Days Later or Sunshine, to what extent did you immerse yourself in similar films from the same genre?

I think I’m already immersed in those films. It’s not something I need to do consciously. At the point I was working on 28 Days Later I had a lot of zombie movies as well as video games like Resident Evil turning round in my head.

I knew most of the time when I was lifting from something, or paying homage, or whatever the most honest way of phrasing it is. It’s not like I had to do research.

The same is true of any of the movies I’ve written, really. Dredd was slightly different. That was based on a comic book that I had read a lot when I was a kid that I hadn’t looked at for maybe twenty years. With that I went back and re-read all of my old books.

We’ve seen many zombie movies since 28 Days Later, as well as The Walking Dead on TV, and Sunshine preceded many recent space thrillers like Gravity, and The Martian. Do you think genre trends are something that can help or hurt a screenwriter?

I think that it’s like surfing. There’s a sweet spot on a wave you can hit, and if you’re too early or too late it doesn’t work out. With Sunshine we were too early, and with 28 Days Later we hit exactly the right spot.

I would say that just like any other genre at any given time there are good, bad, and mediocre examples floating around. But there’s no repeating pattern. It’s just that everybody is doing the best they can, and some people knock it out of the park.

The stuff I respond to the most is the same stuff everyone responds to. I saw this movie called Computer Chess that I don’t think a lot of people saw and I just really loved it. It surprised me completely. I think at any moment there are people out there doing strange and original stuff.

As someone who has had your work adapted by other writers and who has also adapted the work of other writers, what do you think are the narrative responsibilities when adapting a novel for a film?

The responsibilities are to be respectful of the writer and true to the film. I’ve worked on three adaptations, and I’ll always make sure I’m not shutting out the writer and I’m in contact about the process and why decisions are being made a certain way. But ultimately your loyalty is to the film, not the novel.

Is there any difference in the case of something like Annihilation, which is a trilogy and naturally lends itself to becoming a film franchise if successful?

At the point I started working on Annihilation, there was only one of the three books. I knew that it was planned as a trilogy by the author, but there was only the manuscript for the first book. I really didn’t think too much about the trilogy side of it. At the time, I conceived of Dredd as a trilogy, and on the release of that film there was zero chance of it ever being a trilogy because it just bombed at the box office. The way I would approach it now is to focus on the first one and make that as well as you can and to not be thinking ahead. Think about things in front of you at that moment.

Dredd is one of the great sci-fi/action movies of the last few years, but as you’ve mentioned the box office results were disappointing. Since you already had conceived of sequels to the film, in a situation like that do you start to question your script in retrospect?

When I’m on a film I’m completely committed to it and I’m breathing it through development, shooting, cutting – all of it. But when it’s done, it’s done. Some of the things I worked on have not worked at all financially, like Dredd, Never Let Me Go, and Sunshine. When that happens it’s not like the film gets diminished in my eyes, I just think sometimes they work out, sometimes they don’t.

I try not to think of that stuff too much – and I always get it wrong anyway. I’ll see a trailer for a film and think, “Oh, that film is going to be massive,” and then it bombs. I’ll see a trailer for another film and think “That looks like it sucks” and it does great. I have no ability to predict or anticipate this stuff, so I try not to think about it.

How does that compare to a situation like Ex Machina, which in contrast performed beyond expectations?

It’s a really pleasant surprise. The group of people that made that film understood that we were making a small, tricky movie and our best case scenario amongst ourselves was nothing like what happened. It was a proper, genuine surprise.

When a film really doesn’t work, it is complicated. It’s like when it’s sometimes hard to look people in the eyes. You try to avoid recrimination or feeling too bad about it, but there is a period in the aftermath where it is pretty rough. For this it was the opposite of that.

Ex Machina is a sci-fi movie, but were you influenced by any other film genre in terms of the structure?

It was like a prison escape movie. That had to do with where my head was placed. The robot is a secret protagonist in the film, and I was trying to not show my hand and hide that to an extent. That’s always where my sympathies lay, something more like The Shawshank Redemption. There’s a tunnel behind the poster. In my head, that was the world it belonged to.

You wrote the original script for Halo, which was never produced. Even though Halo is a huge media property, we still haven’t seen a feature-length Halo film. How did writing that screenplay differ from the scripts you have written since?

That’s a very different category of gig from my point of view. There are a few things I’ve worked on over the years where I’m a writer for hire. Somebody says, “We want you to do this,” and then I try and do it as best I can according to the way it’s laid out.

It’s very different than 28 Days Later or Sunshine, which are spec scripts, where I’m just sitting around the home thinking that I want to do a running zombie movie or a riff on Solaris except it’s the sun. I just don’t frame them in my head in the same way at all, and that probably sounds like I’m being disparaging. I’ll work really hard on them, but it’s a different gig when it’s not your thing, it’s somebody else’s.

If you enjoyed this article, don’t forget to check out our other interview with Alex Garland: Writing For Robots.