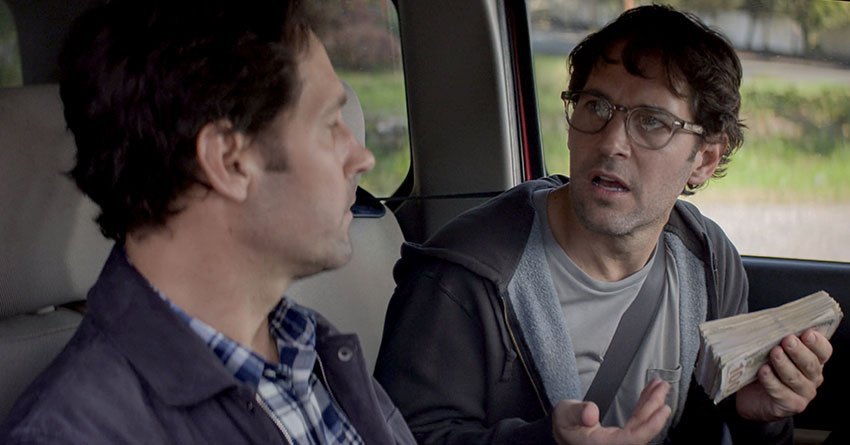 Body sharing and split personality films and TV shows have been around for many years. Here’s a new spin on this premise. What if the “New You” was at odds with the “Old You?” Television writer Timothy Greenberg has done just that in his new Netflix comedy TV series called Living With Yourself. He sat down with Creative Screenwriting Magazine to discuss how he brought his long-gestating idea to the screen.

Like all good comedy, Living With Yourself has one foot rooted in reality. The other foot is planted in fantasy and can do what it wants. The underlying message of the TV show is, “we are our own worst enemies,” according to the show’s creator Timothy Greenberg. He set out to tell this story in a fun way without bludgeoning audiences with sappy self-help messaging.

The screenwriter began with the initial premise of “what would you do if there was another you walking the earth and each of you thought you were entitled to the same life?” There’s no easy answer to this existential question, but nonetheless, it’s something Timothy Greenberg wanted to watch on TV. So he wrote it.

A high concept premise alone isn’t enough to carry a TV series through an entire season. It needs to have a beating heart and actually be about something. “You probably have all the things that you need in your life to be happy already,” mused the TV writer.

Happiness isn’t always tied to success. “Sometimes when I am successful, I’m not happy. And sometimes when I am unsuccessful, I can still be happy.” This is the start of Miles Elliot’s (Paul Rudd) Ying and Yang dilemma in the TV show. This led him to an expensive treatment at a dubious Korean Spa that could transform him into a better and happier version of himself. High jinx ensue.

Living With Yourself was inspired by a recurring nightmare Greenberg had as a seven-year-old boy. His family was sitting at the kitchen table, the doorbell would ring, his father would answer the door and there would be another version of him. Interestingly, his family thought it was hilarious, but junior Greenberg found it terrifying. At the time, young Timothy didn’t understand the significance of his dream. As the years progressed, the screenwriter concluded that it had something to do with who and what he was. It wasn’t until much later that the screenwriter settled on the premise of “happiness lies within.”

Living With Yourself could have manifested on the screen as two beings battling it out in the same body, but Greenberg chose to have two separate characters (both played by Paul Rudd) to add more comedy to the plot – two characters with the same life and the same wife. And neither could accuse the other of adultery. What could possibly go wrong?

Timothy Greenberg is also known for his work on The Daily Show and Wyatt Cenac’s Problem Areas. Although they were stylistically different from Living With Yourself, these shows taught Greenberg some valuable writing lessons. “What is the take? What is the point? What is the central throughline? What are you saying?” The Daily Show also reminded the writer to “get it down, don’t be precious and move on.”

“You can’t work on an idea endlessly. At some point, you have to get it out there, see how audiences respond and see how you can learn from that,” he advised.

Mechanics Of Building A TV Series

“Once I got married and had a family, it became much more important who I was, how I was behaving, and whether I was being the better or worse version of myself,” he stated. These questions don’t matter so much when you’re still single. This underlying theme parallelled Miles Elliott’s conundrum.

Living With Yourself is “the combination of a fantastical story of Miles’ clone and the daily concerns about how I’m living my life with my loved ones,” said Greenberg. He confessed, “there were fights that Miles had with his wife Kate (Bea Ainsling) that were verbatim with the fights I had with my wife.”

Greenberg also infused further aspects of his own life into Miles’ in terms of Miles being stuck in a rut and not knowing what would make him happy. “There were periods in my life where things were not going well. I was broke, people I knew from school were very successful and I was not happy. I wasn’t feeling my self-worth at the time.” This deep look into himself was something the TV writer wanted to explore through Miles.

The writer advises screenwriters to mine their life experiences and personal pain to generate emotionally-resonant story ideas. “Obviously you can exaggerate and take some part of your pain and project it onto something else,” added Greenberg. This is the nature of creativity and fictionalizing a writer’s fundamental truth.

Living With Yourself didn’t stray far from its original format. There were initially ten episodes planned for the TV series. Although they contained humorous situations and additional characters, the clutter created a drag and didn’t propel the narrative or the characters. Ultimately, trimming the series to eight episodes made it tighter and got its point across more effectively.

Various endings were also considered until the writers decided on the current one. Alternative endings included a cliffhanger with the cloning company posing a direct threat to the family. “We chose the most important story between the three of them [Miles, his clone, and Kate] which was the heart of the show,” declared Greenberg. The writer defined the perfect ending as being both “inevitable but surprising.”

As it was as adapted to a TV series, one of the producers asked him “from whose perspective is the story being told?” Greenberg paid attention to how the characters would respond to a given situation. This was the case of the show balancing dual protagonists since New Miles’ perspective was just as important as Old Miles’ one. The screenwriter is also mindful that audiences may process a character’s perspective differently to how he intended.

Greenberg is a big fan of extensive treatments to cement his final story. “I keep the story in prose form as long as possible so I don’t get stuck on dialogue and everything else.” He wrote a treatment for the first two episodes of Living With Yourself before he wrote them. “I wrote these episodes so people would understand the specific tone of the show.” For the remaining six episodes, he wrote a seventy-page bible that described the beats in each episode in detail (11 – 12 pages each). He felt this exhaustive process was necessary because the show was highly narrative-driven. There wasn’t a traditional TV writers’ room, so Greenberg had to find the story early on.

“I don’t write things that are 100 percent set in the real world. There is often a magical realism aspect to it. I tie this to the tone of the show so that it is never fully grounded. I balance the dramatic with the comedy,” said Greenberg,

Regarding the ending of the season, Timothy does not offer a clear conclusion on Miles’ and Kate’s fate. He is not sure whether Miles’ and Kate’s relationship issues are fully resolved. “They are still on the rocks at the end of the show and I don’t know if they will or they should. Hopefully, they will work things out. Their challenges are only far from done. They have only scratched the surface of whether they will wind up in a better place.”

Miles is officially out of his rut. He has solved some of his problems, but the question remains whether these solutions are long-lasting. “Kate and Miles deal with their marriage in a mature way by focusing on the things they do love about each other.” Kate also has her own issues to grapple with. She has to grow up herself. She has a lot more challenges than Kate to overcome.

The fate of a second season of Living With Yourself rests with the Netflix gods. The main thing for Greenberg is that the audience must care about the characters. “The ending had to come at an emotional moment and had to work for both one season or a springboard into a second season.“