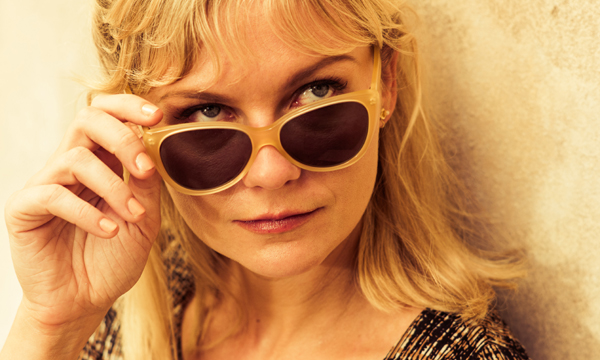 When screenwriter Hossein Amini first read Patricia Highsmith’s little-known novel The Two Faces of January over fifteen years ago, he was instantly mesmerized by the deep dive tale into the dark side of human behavior. Like Highsmith’s The Talented Mr. Ripley, January likewise features Americans abroad, up to no good.

One-part character study, one-part Hitchcockian thriller, the 1962 story follows Wall Street swindler Chester MacFarland and his much younger complicit wife Colette, who during a trip to Athens, cross paths with Rydal Keener–a Greek-speaking American tour guide who skims money from naïve female tourists. Typical to the Highsmith narrative, January features a murder, a cover-up, and suspicious glares—both by and towards all players involved.

With Kirsten Dunst and Viggo Mortensen cast as the May-December couple, and Oscar Isaac as the morally-ambiguous tour guide, Hossein relished the challenge of finding a way to make audiences buy into a story with three severely-flawed characters. Then again, this is precisely what drew him to the novel in the first place.

“Patricia Highsmith doesn’t just put readers in the villain’s shoes. She makes you feel oddly compassionate and understanding towards them,” says the British-Iranian first-time director. “There’s something about that that got under my skin.”

With previous writing credits including Wings of the Dove and Drive, Hossein spoke with CreativeScreenwriting, about articulating action, the advantages of directing your own work, and how he grew sick and tired of shooting cats.

One of the biggest changes from the book to the film, was how you suspended the pivotal moment when Rydal realizes Chester killed the private detective. Tell me about that decision.

In the book, Rydal knows Chester’s a crook from the outset. He knows he’s responsible for what happened to the private detective, but he was still hanging out with Chester and Colette. This was psychologically very interesting in the book, because you’re questioning why he’s doing it, when they had never exchanged a word before Rydal first saw Chester dragging the body down the corridor. But Chester reminds Rydal of his father, so he helps him with the body, without any real motivation. And that’s what I love about Highsmith. People do completely inexplicable things. But in a film, I felt that the audience would be asking too many questions, so I made Rydal almost like an innocent conman, coming up against a much bigger conman. Otherwise it could be very one note, because there was no dynamic shift and no secrets between them. The only person they were keeping secrets from was Colette, for literally 40 or 50 pages of the script, and I couldn’t hang the story on that.

Also, Colette was originally framed as this uneducated nymphomaniac, oblivious to everything around her. But in the movie, she was more aware of what was going. Tell me about Colette’s reinvention.

Kirsten Dunst brings such intelligence and sensitivity and conscience to the part, that once she was cast, I thought it would be too much of an act for her to play this dizzy nymphomaniac. I’m sure she could do it, but in my head, I didn’t believe the Colette from the book would work, played by Kirsten. After a series of conversations with her, I decided to make Colette a more equal part of the triangle, with her own journey. She married this very wealthy man, who she probably saw dealing with shady people, but chose not to ask questions. She bought into this amazing glamorous life in New York, and now suddenly finds herself on a bus in Crete, hiding out from the law. It’s a simple trajectory: a good-time girl who’s scared and vulnerable. That was something I wanted to increase from the Colette in the book.

It’s a hard sell for an intelligent actor to play a dense person.

I completely agree. Kirsten’s just so smart, and the moment I can see the acting, I disconnect.

When it came to dialogue, Colette had a certain economy of speech. After a fight with Chester, he wants to discuss it, and she curtly says, “We had an argument, there’s nothing to talk about,” and disappears into the bathroom. Was that utilitarian dialogue sharpness also in the novel?

That’s actually based on my personal experience. When I have arguments with my wife, I want to talk it out, and just like Colette, my wife often shuts it down. It’s an interesting speech pattern, where the talker gets more and more angry, and the other person wins by saying less. Frustration arises from not having an equal amount of speech returned to you. In movies, you often get people going at each other almost equally, but it rarely happens that way, and I was interested in exploring that rhythm.

I’m curious about this effective moment when Rydal is nervously opening and closing the Zippo lighter, before he finally lights his cigarette. Was this an on-set choice that Oscar Isaac made? Or was this articulated in the script?

You mean when Rydal sits down opposite Chester, on the ferry?

And he keeps opening and closing the Zippo lighter.

Yeah, he keeps flicking it. It’s funny because that was originally the longest dialogue scene in the entire script. It was three whole pages where they just talked and talked and talked. But when we rehearsed, we quickly realized this was too much, and decided it would work better as a silent scene. We went from three pages of dialogue, to literally silence. The Zippo lighter was something that just happened. Before filming that scene, Oscar just went off by himself, into a corner, and I could just feel him building himself up, and I remember thinking, “Do I go talk to him? Do I go psych him up?” And then I thought, “No, there’s something going on there,” so I backed off. When the camera rolled, he just literally walked over, grabbed Viggo’s glass, drunk from it, started flicking the lighter, and lit his cigarette. It was all stuff he’d worked out in his head, and I learned a huge lesson that day. If I had gone over and talked to him, we would have watered down that energy. There’s a purity in what he did that would have been compromised by my interference. And as a result of the lighter thing Oscar did that day, we went back in the editing room and gave the lighter its own little sound effects back story, so now in the film, the first time he uses it, it’s quite quiet, and then later it’s a bit noisier, then in that scene, it’s even noisier still.

Another great moment was when Colette says to Rydal: “I’ll bet I can make you laugh”, and she does a funny little cross-eyed eye roll. Unless you knew Kirsten Dunst could do this, I’d wager this wasn’t in the book, or in the original script.

It was scripted. It wasn’t in the book. But it was scripted. I simply wrote: “She rolls her eyes”. But what Kirsten did is 100 times more interesting. She made it her own. And this helped me realize something. Whenever you’re a screenwriter on other people’s movies, sitting at the monitor watching an actor change a line or do something differently than you imagined it, you think, “They’ve just destroyed the scene”, and get depressed. But as a director, I’ve found that I kind of enjoyed it, because it liberates the scene and adds an extra layer to the performance. And now I feel that if you shoot a scene exactly as written, it’s quite dangerous, because it can be a little bit dead. You want the actors to improvise based on a mood or an atmosphere they’re feeling on set. I wish more screenwriters were allowed in rehearsals and read-throughs and allowed on set, because dialogue between a writer and an actor is incredibly rewarding. On Drive, [director] Nic Refn allowed me to speak to those actors, and I know it improved the script immensely.

You’re a writer first and foremost, so in the script, when you were describing that chase scene at the Grand Bazaar, how specifically did you articulate every beat of the action? Did you spell out every move, like, “Rydal ducks into an alley”, or “Chester runs up the stairs”?

When I write an action sequence, I imagine it in my head, shot for shot. Like with the chase sequence at the beginning of Drive, I described the car sneaking behind another car and the police car driving past, and I described the police car like “a shark passing”. And it was the same thing with this chase in this film. I had it almost beat by beat. But the first time I wrote it, the whole thing was inside the Bazaar, but when we got on location we realized we wouldn’t have permission to shoot inside the Bazaar itself for more than one day, so I rewrote the chase scene to take place outside, again–scene by scene. Each scene had its own header–if it’s a corridor, or a stairwell, it’s another slugline for each. I couldn’t simply write, “There’s a chase”. It’s more like: “Rydal comes around a corner, but he sees a policeman so he runs up a staircase.” I describe it by the choices he has to make. Does he surrender? Does he run up the stairs? Because for me, dialogue is a fraction of what happens in a screenplay. Silent movie storytelling is just as important, if not more important to me.

Finally, there was a scene with an alley cat. Was this cat cameo planned or unplanned?