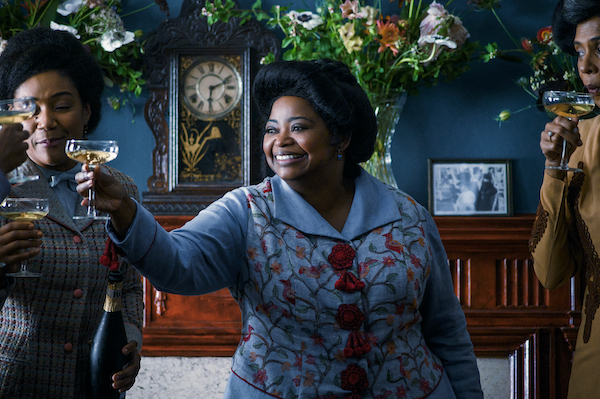 “America’s Story, by a Black Woman” Screenwriter Elle Johnson on ‘Self Made: Inspired by the Life of Madam C.J. Walker’

“I got my start by giving myself a start.
Don’t wait for the opportunities to come.
You have to get up and make them for yourself.”
− Madam C.J. Walker

“As an African American woman, I have always known about Madam C.J. Walker, America’s first female black entrepreneur. She’s always been a part of the fabric of my life,” declared Elle Johnson, executive producer of Self Made: Inspired by the Life of Madam C.J. Walker. “I didn’t know a lot about her, except for the fact that she made hair care products for black women and my mother still bought those products.”

C.J. Walker’s legacy lives on today to inspire women across the globe on the virtues of product marketing and sales. Walker described herself as a woman who came from the cotton fields of the South over a hundred years ago. From there she was promoted to the washtub and from there to the kitchen. And from the kitchen, she promoted herself to the head of her company!

In addition to making her fortune as a developer of cosmetics and hair products, the real-life C.J. Walker was also considered a philanthropist, social activist and political activist in the late 1800s and early 1900s. Octavia Spencer stars in the limited series about the first female self-made millionaire screening on Netflix.

Inspired by the book On Her Own Ground by A’leilia Bundles (C.J. Walker’s great-great-granddaughter, the series highlights the life of C.J. Walker (born Sarah Breedlove), as a fictionalized version of Bundles’ retelling. “The book was written twenty years ago and it’s been in and out of production. We used ‘Inspired By’ in the title because we wanted to fully explore her life across four episodes,” she said.

“In order to hit on all of the themes to embody her entrepreneurial spirit, we were going to have to create some fictional characters and some composite characters to complement the narrative. We wanted to explore issues of colorism, so we created the character Addie Monroe (Carmen Ejogo), who was a hybrid character based on other people in Madam C.J.’s life.”

Elle Johnson has also worked as a staff TV writer on various shows including The Glades, Finding Carter, The Fosters, and Bosch.

Context For the Times

“Walker was born two years after the Civil War ended, so her story is an aspirational story about a woman with a passion. We wanted to add some context to the time period. We created a version of her father-in-law who had been enslaved so we could show the differences between blacks during slavery and C.J., who was born free.”

Some of these ideas could be argued as artistic embellishments to the true story, which is partially why the creators decided the title includes “Inspired By.” That said, there was an equal amount of true stories that simply didn’t fit the TV series, such as an undercover woman infiltrating Walker’s team because the Department of Defense was unsure of Walker’s company and perceived it as dangerous.

In the mostly female TV writers’ room, the main focus was embodying the Madam’s spirit into the story. “We used flashbacks because we didn’t have a lot of time and space. We focused on a period of her life when she was starting the business, which was around 1908, and then we supplemented the book with outside research.”

According to Elle Johnson, “the TV writers’ room only works when people are willing to bring the best and worst of themselves in service of the story. I felt like we did that. We had a room that would debate and argue. And, for the people who signed on to do this project, it was a labor of love. It took two years to bring it to the screen, so the passion is there.”

“C.J. Walker was her own hero, so I brought in those stories of myself to flesh out her stories. Her history had these great dramatic moments,” said Johnson, “but we really wanted to tell the story about her personal sacrifices as a woman of color growing her business. Her mission was to uplift all women, so it was not only profitable to her, but to other women.”

The book also told a story about the larger-than-life character going to her husband’s hotel room with a gun because he was having an affair, but then making the decision not to harm her because she worked so hard for her business.

“We used an element of that story, but not the gun part. She had so many true moments, full of drama, that lent themselves to the TV series. This is also true about the Booker T. Washington endorsement when she won him over.”

C.J. Walker’s story is timeless, but at this time in America, people are more open to hearing more diverse stories. “The appetite has always been there for different stories, but Hollywood is catching up with what they’re willing to put their money behind. People are ready for these stories to be told.”

Along with Elle Johnson, actress Octavia Spencer is also an executive producer on the TV series (along with LeBron James’ company Spring Hill Entertainment). “The book has been out for twenty years and been optioned multiple times, but for whatever reason, Hollywood is now ready.”

In an effort to highlight the visionary on the screen, the creators wanted to also showcase a modern approach to C.J. Walker’s story. This consisted of contemporary music by African American performers (similar to Misha Green’s Underground), but it was also meant to entertain, rather than for it to be historic in a way that “felt like homework.”

As the TV writers started to develop the character – who transformed from Sarah Breedlove to Madam C.J. Walker – they focused on the personal aspects of the story. “This wasn’t just a woman who was selling a product and got wrapped up in sales. Walker was truly a marketing genius in that regard.”

At the time, cleanliness was certainly more difficult than it is today. Basic essentials, often referred to today as self-care, were an issue. “C.J. Walker suffered from a scalp disease that made her lose her hair and that’s how she ended up making products to cure her scalp disease and grow her hair.”

C.J. Walker not only helped herself but had the foresight and integrity to turn her products into something that would help uplift other black women in similar situations. “She was doing it for herself, but it also became a story about lifting others. She even turned down business opportunities if they weren’t for the good of other women that were working for her.”

One could argue C.J. Walker is the reason why companies such as Avon and Mary Kay exist today. She pioneered beauty demonstrations and product parties. She was the originator of self-empowered women through beauty-centric products.

“This story is really about Madam C.J. as a businesswoman on par with Carnegie, Rockefeller, and Ford,” declared Johnson. “This is a woman who built her business from nothing, had a great idea, and was able to overcome all of the ‘-isms’ that were there to bring her down, like sexism, racism, and even colorism from her own community. You can’t help but wonder if it not for those things, what else could she have achieved? How much further could she have gone? She would have been Oprah before Oprah.”

Along with her countless accomplishments, Walker certainly had many flaws. “Madam C.J. definitely was human,” Elle joked. “She was subject to ego, frailty, and had many flaws. It was wonderful for us to take those flaws and expose them, but if you think of the people who built our country, the saying goes, ‘Behind every great fortune is a great crime.’”

C.J. Walker was one of the first real people to showcase life beyond the plantation. “She did want to be a millionaire, as she was driven to never settle for less, but she seemed to feel like she deserved it. She was the only person born free so she didn’t have those blinders or restrictions on her. However, she was super aware that she was a black woman that could help other black women.”

“Everything she did was geared towards the idea of ‘I can do this,’ but also ‘You can do this.’ She rewarded herself and her agents for work, but also for giving back to the community, which was incredible. She wasn’t apologetic for being successful.”

In today’s world, it’s possible C.J. Walker would have been someone along the lines of Bill Gates today, a capitalist turned philanthropist. “She could have made more money on the backs of her employees, but she chose not to do that. She realized it wasn’t worth it and it was better if everybody could thrive, rather than a zero-sum game where I win and therefore you lose.”

Johnson concluded, “We are defining what it means to have a successful democracy. You have a group of people who were enslaved, who then are fighting for the next hundreds of years to get their rights, so America’s story is the story of black people. Its success or failure depends on how people are treated. This is America’s story, by being about a black woman.”