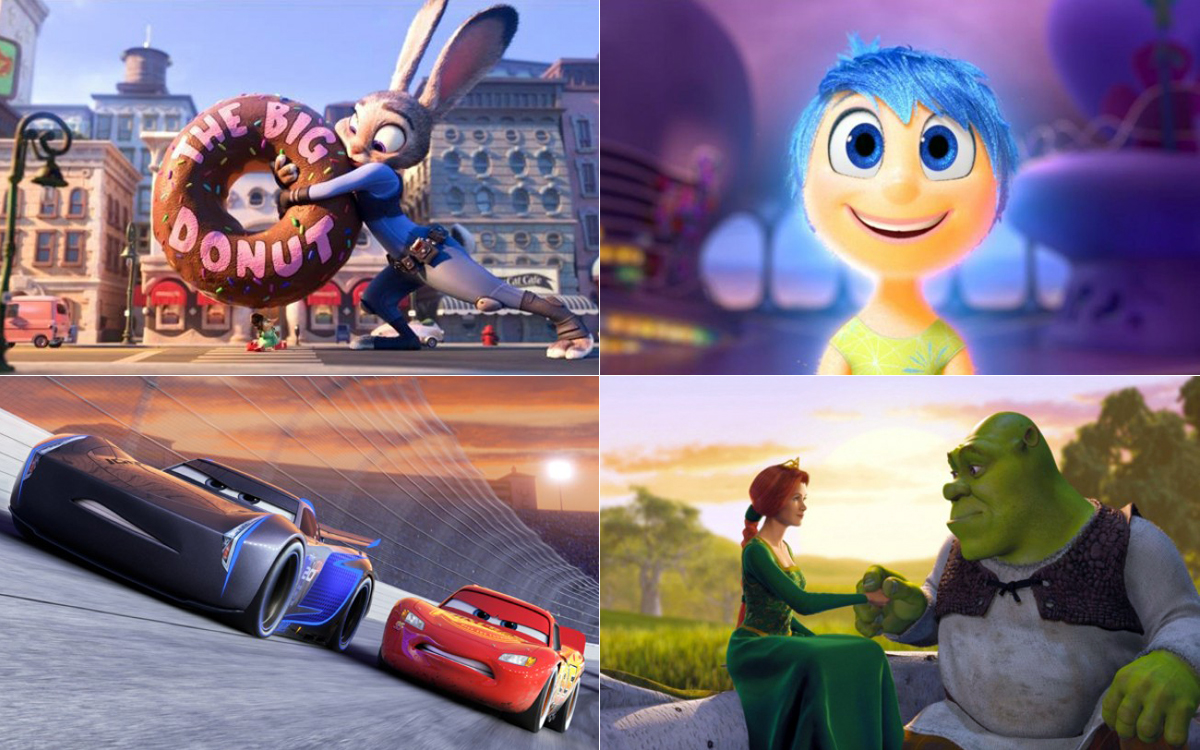 Most screenwriters are aware that the romanticized fantasy of the lone screenwriter typing out a masterpiece on his or her own is just that – a fantasy. Crafting a story for a film is a collaborative process, and that is most apparent in animation.

In the long process of bringing an animated film to theaters, an original concept might undergo half a dozen or more different transformations, before a final story is set only months before release. Involved in that decision can be multiple directors, screenwriters, producers, story supervisors, story artists, and story consultants, among many other creative roles.

This makes writing screenplays for animated films a much more collective and on-going process.

Creative Screenwriting have interviewed the creative minds behind many great animated movies, including the Oscar-winning films Shrek, Up and Zootopia. So read on for a compilation of their advice, including appealing to all ages, finding emotional balance, and the advantages of collaboration. And, of course, you can click on the links for the full articles.

What Animation Can and Can’t Do

In animation, you can have fifteen thousand helicopters fly over the Grand Canyon.

And you can definitely write all kinds of emotion between the characters for animation, but you also have to remember that unless you’re doing a giant 3D animated thing, it might not capture every little nuance. So there’s some character or facial nuances that might not be able to be pulled off in animation, but meanwhile it would be easier to write a giant pterodactyl flying over the White House.

It’s not just about exploring the right story, it’s exploring every story. So it becomes very wearing on writers when you’re asked to write a scene that you just don’t think is right.

When it became obvious that it was going to be about a Shrek who decides to go be a knight to get people to like him, that was the point where we said that if we stayed on the project as writers, we were going to be standing in the way of what needs to happen to get this movie made.

What’s really nice is that eventually that story proved itself to be as lame as we thought it would be, and it came back to our story, the one we’d been fighting for.

“Remember your first laugh.” Because by the time you get three years down the road, you’ve seen that joke a hundred times and you’re sick of it, but the audience hasn’t seen it once. That’s why it’s important to screen it for fresh eyes, for different audiences. You have to take some of those things into account sometimes.

Someone asked our screenwriter on Tangled, whose name is Dan Fogelman (Bolt; Crazy, Stupid, Love), “When is the screenplay was done for an animated film?”

We constantly rewrite, even up until the last couple weeks of production on the film. I would imagine we did over one hundred drafts of the script, over the years, and that would be small and large rewrites and overturns. It’s so constant that it would be ridiculous to actually count, because it’s constantly in motion.

Another writer at Disney once said it’s like “trying to paint a moving train.” It just goes and goes and goes—especially once it goes into production. Animation is so expensive that we really try to work out the story as much as possible before we dive into production, but that doesn’t always work out that way.

Everyone knows the saying “Writing is rewriting.” But when you’re essentially forced to take three or three-and-a-half years to rewrite, rewrite, and rewrite, it’s almost like performing a task forensically. In a way, you become clinical about it because you’re living in slow motion.

Imagine doing a task that you love and know how to do in slow motion over and over again. It gives you an edge. At least for me, it gives you an insight that I just think no other version of writing a script could ever give you. For that, I am so grateful.

Weirdly, doing it in slow motion for three years made me a faster writer. It’s almost like athletics – you train and practice the same move over and over one thousand times so that when you do it it’s in your muscle memory in a way it never was before.

That means that no one’s ever going to say, “Well we’ve got what we have, stop writing, we’re just going to finish the animation.” There’s always a chance of, “Well that hasn’t been animated yet, so how can we make it better?” or “How can we change that and improve it and add jokes?”

You sort of discover the movie and things in it as you’re making it, which is why I think as a whole, the quality of animated movies tends to be so high. You have so many chances to keep working on it.

Engaging Audiences of All Ages

Animation is a medium. It’s not just for families with kids—it’s for people of all ages. It’s a way to tell a story, and if we do our jobs well, it can be entertaining and emotional for everyone. And that’s our fundamental goal.

So when we build the world and the characters, we aim to have content for everyone. We don’t do it as a science where we have 50 percent of the jokes for adults and 50 percent for kids, but we do try to make the humor try to come from the characters themselves.

The story itself is the most important thing. If the story doesn’t work as a film, then all of the most beautiful animation in the world won’t bring it together. So it really comes down to story and finding that emotional core that is going to make your audience invest in the character who is driving the movie.

…It’s critical to find that balance of emotion, humor and that classic Disney pathos, so everyone can have a complete experience with the film. With a Disney film, I think people want more than just entertainment; they want to experience a deep, emotional reaction. It’s tough to make it fire on all cylinders, but that’s why we spend so much time reiterating and reinventing it.

I am sure it’s been over-said that it’s preached everywhere at Pixar that “Story is King”, but it really is true.

I also think that because the films take so long to make and there’s a maturation of the story as you go, sometimes the story tells you where it wants to go. Because we watch it so many times and change it, you can see the things that people are responding to emotionally.

Working with The Artists

Writing credits are not always accurate on animated films, and one of the reasons for that is they don’t include the storyboard crew.

…It is a group experience that takes place over many years, with everybody in the room, including the director, the story people, producers, the writer. They call it a story crew, and that story crew contributes significantly to these films.

What we think of as the screenplay doesn’t necessarily exist in the way you usually think of it in the live-action model. In fact, for many months all that exists are different sequences and script pages for those sequences, and the boards; the boards are the screenplay, and then the screenplay comes off the boards.

Quite simply, answers get in the way of solutions in the animation process. It’s a trap that we’ve always fallen into, providing answers before people were ready for them. What you have to do is step back, and let people ask questions and discover answers on their own…The role of the writer on an animated project is not the traditional role. The actual role is to provide possibilities of what it could be, not to argue against everybody over what it should be.

I think it’s also really fun to bring in the visual component of animation. Writers enjoy working with the story artists who are visualizing what they do.

You can think in terms of the visualization of worlds that don’t exist, like Inside Out, and it lets you go off to these fantastical places. The story artists are also great story minds, and have ideas that you can handshake with as you go forward.

We’re all working together to make the best movie we can possibly make, and fortunately the audience has been enjoying our films and the stories we tell. It’s because we’re all in this room together bouncing ideas off each other and making each other laugh. Whether any of that makes it into the film or not, it makes the atmosphere very collaborative.

Josh Cooley, Inside Out

I can’t emphasize enough that we work in a very collaborative environment. There’s lots of opportunities for back and forth. Throughout you have a group of eight or ten people who are involved in building the story. There’s this really organic thing where it kind of grows. When you step back, it’s hard to exactly credit who did what, everything is credited to the team, and I love working in that kind of environment.

…I think a lot of people aspire to work in a collaborative environment, but to actually create one, and foster one, and work in one, can be challenging.

It can sometimes fight human nature where you want to want to be told, “everything you do is amazing, your movie’s great, don’t change a thing.” But if ultimately that’s all you ever hear, and people are afraid to tell you they disagree with something, then your movie can never face those challenges, and never get better.

So we credit a lot of those successes of those films to the environment that we work in.