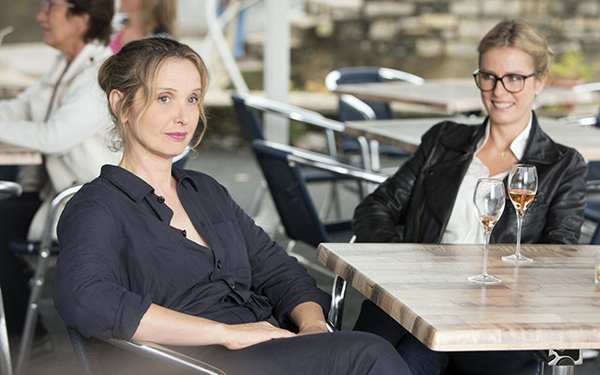 “As a woman you have to assume it won’t get made, but keep writing anyway.” Julie Delpy on Lolo

Julie Delpy is a French-American screenwriter, actress, and director. As a graduate from New York University’s Tisch School of the Arts, Delpy has been in over 30 films, perhaps best known for work in Richard Linklater’s Before- Trilogy, co-starring Ethan Hawke. Within her many ventures, she has been nominated for two Academy Awards.

In Lolo, Delpy co-writes and stars as Violette, a 40-year-old workaholic with a dominant career in the fashion industry and little time for love. Coincidentally, she falls for a software geek named Jean-Rene and the two try to make it work, despite an unknown force that keeps getting in the way.

What led you into acting and screenwriting?

My parents were actors, but I actually started writing before I was acting. Every kid writes, don’t they? Well, my son doesn’t write, but I wanted to be a writer or a filmmaker and then I saw the possibilities for acting. I wrote a screenplay when I was around fifteen and then I started acting, hoping to make it, but it didn’t happen. I sent out my headshots to casting directors and then someone hired me, so that was the start.

In terms of writing credits, it looks like some of your work as a collaborator came from the Before trilogy, directed by Richard Linklater.

It was interesting because with Before Sunrise (1995), Ethan and I basically re-wrote all of it. There was an original screenplay, but it wasn’t very romantic, believe it or not. It was just a lot of talking, rather than romance. Richard hired us because he knew we were writing and he wanted us to bring that romance to the film. We brought those romantic ideas and that’s how I wrote something that actually got made, without really getting credit for it.

But, if I had written Before Sunrise and been credited, then I doubt it would have been financed. Imagine a 22-year old writing a romantic movie. I had actually written a romantic movie and I used a lot of those notes in Before Sunrise, because I knew no one was going to finance that movie by itself. I was just a 22-year-old woman. There was no way—not even in a parallel universe. But it was this safe place, because every scene that I wrote got critiqued but that made me more comfortable in my writing.

What has it been like working on that story over the past twenty years? [Before Sunrise 1995, Before Sunset 2004, and Before Midnight 2013].

It’s a romantic story and it’s almost taken that aspect away from me, in a way. With every film, I know that I need to come up with new romantic ideas, but, at the same time, I’ve somewhat given up on that kind of stuff. It’s not that I’m not romantic, but my idea of romance is different now. I’m not completely cynical, but with every film, you have to go back into that romantic mode, which can be hard to do. It was hard in the second film and even harder on the third one.

With the third one, it was probably the least romantic, because we’re evolving into less romantic beings, or at least, less fantasy-romantic beings. It’s not like it was when we were young. It’s funny, but I was actually just reading a journal of mine from 1991 and basically, half of it was in the film—about romance or love, blah, blah, blah…

With your new film, Lolo, it would appear that your character Violette has somewhat given up on love. Are you still keeping personal journals or how did this story come about?

This film originally came from a discussion with a producer and his wife, who is actually the co-writer (Eugénie Grandval). We thought it would be fun to make this kind of film, but for me, it’s not a very personal film. It’s more of a job-for-hire with very fun dialogue, but the concept itself came from our work together on another film called Skylab. There’s really nothing autobiographical in Lolo. It’s not really personal at all. If anything, the character of Ariane (Karin Viard) is closer to me than the character of Violette.

What was the original idea or spark for the film and how did the rest of the story come about?

We talked about being mothers and how to raise children in a way that they grow up to be functioning human beings, rather than self-centered sociopaths, or—the other way around—self-destructive, which can be the worst thing to happen to a parent. We discussed that idea and then the idea of falling in love in your 40s.

Then I rewatched this film called The Bad Seed (1956), which sparked everything else. It was a movie I loved growing up about parents wondering why their kid is so evil. What do you do when the worst person in your life is your own flesh and blood?

So it’s a combination of talking to the producer, and his wife, and wanting to work together again. Then, there are little details throughout the film that most people don’t notice like reference to how society can destroy itself. Essentially, Lolo is like that. Society is sociopathic and destructive in a way that could bring us to the end of time.

Patty McCormack as Rhoda Penmark in The Bad Seed (1956)

There is a joke in the film that references the tone of 90s American comedies and parts of Lolo even have that feel to them. Was that something you had in mind or was that coincidental? How do you perceive the film in terms of genre?

What I liked about 90s romantic comedies is that no one was detached. Characters today are detached and they don’t care. Humor is more detached and less involved. The 90s comedies made me laugh more because people could see these intense scenes that existed within the moment. Now, everyone is laid back and it’s just third-degree humor. Half of the time I watch movies, I don’t get it. It’s not really funny or it’s kind of mean or it’s rude or vulgar—not even funny vulgar.

I like Woody Allen movies from the 90s about relationships. People are crazy or hyper and that’s really funny to me. People are funnier when they’re hyper than they are when they’re aloof, making jokes at someone’s expense. It’s all about being cool now. I don’t like cool people, they bore me.

You’ve had a variety of writing experiences. Logistically, what’s it like working on these collaborations, passion projects, and rewrites?

Sometimes I love critics and I think they’re really brilliant. But then, they may say, “Why is she doing this comedy?” And I’m thinking, “Why do you think I’m doing it? Do you think I have nothing else? I can’t get the other films made.” But, anyway…

The truth is—it’s hard to make movies. Over the years, what you see is what I’m able to make. The rest will be forgotten after I die of lung cancer.

It does sound like some of your personal writing has led into these other films as a type of collaboration.

I write by myself sometimes, but I love collaborating. I think it’s fun to write with other people. You can bounce off ideas. Drama is easier to write by yourself than comedy. Comedy is best when you can play the joke to see how people will respond. You can find out if you are the only person who finds a joke funny.

Right. If you have the room laughing, you know the joke has merit.

Yes. Comedy has more to it. I’ve written comedy by myself. I wrote 2 Days in Paris alone, even though I did spend some time with Adam Goldberg discussing the characters, but I was by myself writing the jokes. The same thing happened with a movie that no one saw, called Skylab. It was a comedy where I was completely by myself. I didn’t even speak to anyone while I was writing it because, at the time, I was taking care of my 6-month-old son and I would write during his naps.

Julie Delpy on set of 2 Days in Paris

Do you consider yourself more a writer or more of an actress?

More of a writer. Definitely.

Is there any additional advice you would like to share or anything you wish you would have known as you began as a writer?

As long as I’ve been a conscious human being, I’ve been writing. To me, the only advice I have is to write and write and write… Eventually, something OK will come out…or not. One day you’ll write something bad that will probably get made and then you’ll write something good, and it probably won’t get made—especially if you’re a woman. As a woman, you have to assume it won’t get made, but keep writing anyway.

The truth is, there is no advice to give to writers. If you’re a writer, you’ll keep on writing. If you have it in you, you will keep on writing. Even if I’m just writing a silly comedy, I have to write. Otherwise, I start talking to myself on the street. I go crazy. I go insane. I would make the jokes that Arianne would make in public places and then I’d get arrested. But seriously, if it’s your calling—and I call it a calling even though it’s just writing movies and who gives a shit?—but if I don’t write, I go nuts.

Dany Boon as Jean-René Graves and Julie Delpy as Violette in Lolo. © 2016 – FilmRise

The film is a comedy that may offend some people. It’s women expressing themselves in a way that some men won’t like; and some women won’t like. But, after all, these characters are reasonable adults and not they’re not drunk and they’re not raping anyone, so I feel like it’s OK.

Everyone is a grown-up and even though Lolo is Machiavellian, he’s a funny character. It’s not even Oedipus complex; he’s actually less detached than that, sadly. He doesn’t even have the passion of Oedipus. It’s just the convenience of being destructive. He’s not in love with his mother; he’s just doing this for him. He’s got a selfish, spoiled mentality, which is taking over everything. I’m not trying to say something profound, but we are all spoiled fucking brats with a complete lack of empathy.

Can you share any details about what you may be working on next?

I have a movie called Zoey for now. That’s a working title so it may change. It’s a drama. It’s probably the best thing I’ve written and, of course, it’s hard to put together because it’s a drama and no one takes me seriously. Then there’s another film called Dazzling Display of Splendor, which is an epic comedy that’s kind of a fairy tale about movies and filmmaking.

Then I have another film called Cancer Vixen, which is more of a job-for-hire, but it’s based on a book and it’s actually a comedy. It’s actually not depressing. It’s a beautiful story. Somewhat of a fairy tale as well, but it’s about cancer. It’s about cancer and love and the business she’s in, but it’s a sweet film. Dark, but funny, so there are three projects I’m juggling now and whichever goes first, goes first.