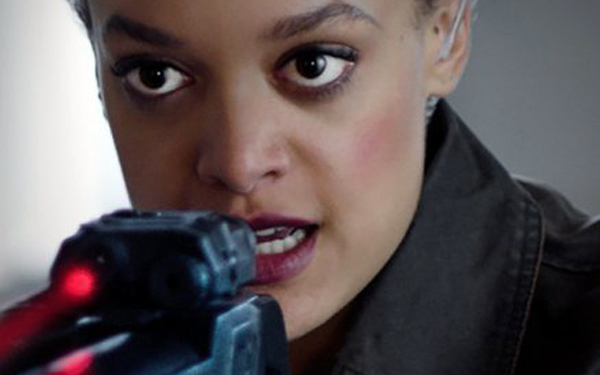 “They are many. And they are angry,” reads the tag line for the new television series, Hunters, which premieres April 11 at 9 p.m. CST on the Syfy Channel. The hybrid gritty crime drama and sci-fi thriller based on best-selling books by Whitley Strieber, puts a new spin on aliens as monsters that look just like us.

Gale Anne Hurd’s 35-year career as producer reads like a ‘best of science fiction’ list, including The Terminator, Aliens, Tremors, and The Walking Dead.  Natalie Chaidez has worked as producer and writer on some of the best recent TV shows, such as The Sarah Connor Chronicles, Heroes and Necessary Roughness.

Gale Anne Hurd and Natalie Chaidez, together with actress Britne Oldford, talked with Creative Screenwriting about the ambiguous nature of character and why screenwriters should never attempt to figure out a screenplay’s plot before writing it.

How closely did you adapt Strieber’s book Alien Hunter: Underworld, for this show?

Natalie Chaidez: Strieber’s book is really a jumping off point. Gale is a long time fan of Whitley and that is how Gale found the project. We then met each other through our agents at UTA. Then the project really took its own path. So we really did deviate from it, although I’ve worked really closely with Whitley.

Whitley came to  the set in Melbourne and performed a cameo, you’ll have to look for that in season one.

His new book (The Super Natural: A New Vision of the Unexplained, written together with Jeffrey J. Kripal, and J. Newton Rayzor, professor of religion at Rice University), came out recently.

Gale Anne Hurd: There’s also another one (of Strieber’s books) that has been renamed Hunters. It has Julian (McMahon) on the cover.

The show’s antagonists don’t value human life. Did you base the criminals’ MO on ISIS in any way?

Natalie: I landed on Hunters not wanting to do what other shows have done about aliens. I really wanted to create a different mythology. So, I created a group that is behind the eight ball that doesn’t have a lot of resources, that’s desperate, that’s alone, and that’s hungry. That sort of led me into the allegory that hunters are terrorists.

Are there ISIS references? I mean they’re operating as terrorists and that’s who are in our collective mind right now. I think someone looking hard enough will see some references to that, but it’s not based on ISIS in any way.

Gale: This whole process started three years ago, or three and a half years ago. The idea of not being able to look at someone and know if they’re a terrorist just as you can’t look at a hunter and know they’re a hunter. What does that mean, how do you pursue them, and what happens when you do capture them?

Those are some of the issues of the day that we’re dealing with, and people are divided about that, and that’s where great drama arrives because you can have characters representing all sides here. And because it’s dealing with aliens, it’s not pressing those same buttons.

Did you incorporate Homeland Security thinking with the idea that “everybody’s hiding something?”

Natalie: Yes. As Gale says, ‘the Walking Dead are the monsters that are chasing you and Hunters are the monsters inside of you or sitting next to you.’ There is that idea of how close people are, the bad people and the idea that the terrorists are hunting us. That’s something that we’re all scared of.

Brothers in Arms, by Camille Tawil

Gale: I’ll tell one short anecdote. One of the younger actresses in Hunters, Shannon Berry, was reading a book I had sent her, Brothers in Arms: The Story of al-Qa’ida and the Arab Jihadists (written by Camille Tawil in 2011.) It’s about a reporter who poses as a young girl to communicate with real jihadists.

Someone pulled her out of school and wrote a police report. They said ‘we’re worried that you’re going to join a jihadist cult.’ They called her family, but they wouldn’t tell them what it was about.

Natalie: She said ‘it’s research; I swear it’s research.’ That just shows you how real our fears are. My fear is that a school administrator could see a monster in a young girl reading that book.

Gale: And not even know that the book was exposes ISIS as a terrible thing and what their tactics are. Assuming instead that it was a manual about how to become a terrorist.

Natalie: But it speaks to this question as to how high our fear and anxiety is and how our society determines who is a monster.

In Strieber’s book, Flynn has been forbidden to take lethal action against the alien murderers when protecting Earthling civilians. Tell me about this interesting dichotomy and how it plays out in your TV series.

Natalie: Flynn is looking for his wife, Abby. He doesn’t know what she has to do with the Hunters, why she has apparently joined them. How far Flynn will go and what he will do to protect his wife is definitely addressed and what lines he will cross. He will definitely have some challenges.

As The Walking Dead characters spend more time living under duress fighting unknown forces, they become aggressors.  How will you handle this same psychological aspect in the series Hunters?

Natalie: Flynn is a vet so he struggles with PTSD. He doesn’t know if what he is experiencing is a product of his symptoms or if it’s real life. The great mystery to me about Flynn chasing Abby is, you never really know the person you love. That’s kind of the fear that we have. Who is inside of you?

The idea that someone or something might be inside of the person that you love is a mystery that needs chasing. He asks ‘Who is this person that I love?’ He finds an answer by the end of the first season.

Like the TV shows Heroes and The Walking Dead, the main theme for the Hunters series at times feels personal. How personal is it and how do you weave that into the storyline without being preachy?

Gale: In Walking Dead, you can identify the monsters. The zombies you can tell; obviously part of the issue there is what happens if the zombie is someone you love or a family member.

But in this case you can’t tell by looking at someone what they are. Like with anyone, whether they are hunter or human, you don’t know what their motives are. So you’re always off kilter in Hunters even more so than in the Walking Dead where the villains make themselves apparent very quickly. That is not the case here.

You have a personal attachment to saving the planet and saving humanity that is very evident in The Walking Dead and also in Heroes.

Gale: What I find most interesting is taking ordinary people, thrusting them into extraordinary circumstances and seeing how they cope, how they succeed, how they fail. And always like in so much of the things that I’ve done, the stakes in this case for failure are global.

So it’s a little grayer world than Heroes, literally grayer.  We ask an additional question about character: how do you maintain your morality and save your soul while you’re trying to save the world?

Britne, how would you characterise the moral compass of the character you play, Allison Regan?

Britne Oldford: I think it can be completely debatable whether Regan — off the jump — is good or bad. That’s strictly based off of her motives, based off of certain things she may do or why she is working against her own kind.

But also, that question can be posed to any human being. Are you good or are you bad? What makes you good? What makes you bad? Because good people can do bad things. So it’s a difficult question definitely and you’ll see that develop for every single character throughout this first season of Hunters.

Your shows do a really good job at not coming across as preachy.

What is one bit of advice you would give a screenwriter?

Gale: My big thing really is the writing that I don’t respond to is clearly where writers have figured out the plot first and they’ve tried to shoehorn characters in to get to a certain point in the plot.  You have to know your characters inside out and once you do, they will guide you. They will almost make the choices for you. The mistake that a lot of people make who take these screenwriting courses, which basically say there is a formula for writing and it’s all plot, they come up with a plot and it’s dead wrong.

Natalie: I also don’t do any formulaic writing. My best advice would be to write a lot, and write something good and if it isn’t good, go back to step one and repeat. Basically, that’s all there is to it.