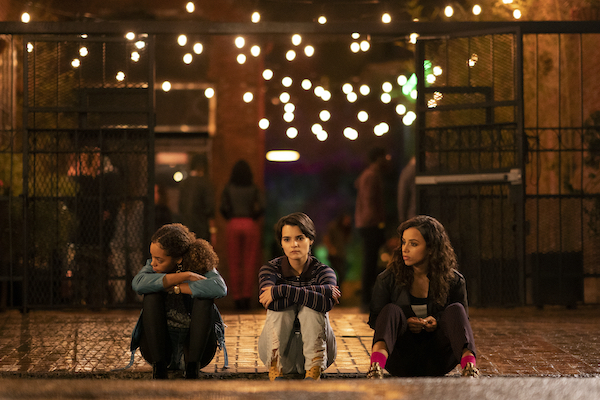 “Suddenly, the writing turned three-dimensional,” recalled Sarah Goldfinger, thinking about seeing her first play come to life during college. “Until that point, I had only written in prose, so seeing my words out loud, with people in seats, and actors memorizing my words, made me want to hear my words out loud more.”

The summer after college, Goldfinger was torn between moving to Los Angeles or New York, but decided, “It was better to be poor in a warm climate,” which led her to the West Coast. “I moved to LA and worked as a nanny and personal assistant for eighteen months, while I took coffee meetings and everything you do to try and break in.”

Goldfinger looks back at taking this risk of moving with no connections as “the hubris of being twenty-one.” She said, “I had no car, eight hundred dollars in the bank, and I bought a one-way ticket.”

At the time, she wasn’t sure exactly which way to tackle her major goal of writing, but taking a variety of meetings eventually led to the advice that she should seek a position as a writer’s assistant. “It was a slow gathering of information,” she continued.

Her “non-plan” plan worked. Around 2003, after eighteen months of following her dream, she landed a writing spot on the TV series, CSI: Crime Scene Investigation. “It sort of skyrocketed my career because I worked on CSI for nine years. It was sort of an end of an era of television, where twenty-nine million people watched CSI on any given Thursday. There’s nothing like that forum anymore.”

She wanted to write character-driven stories. Working her way up the ladder, Goldfinger worked on other shows like Brothers & Sisters, Hawaii Five-O, Grimm, Parenthood, then Jane the Virgin, Charmed, and now, Trinkets.

Going To Plot School On CSI

For Goldfinger, writing characters came somewhat naturally, but while working on CSI, she learned how to also write tight, procedural stories. At the same time, she was writing specs for shows like Gilmore Girls and Sex and the City.

“I worked on his hard-core, muscular procedural while writing these things that were more girly,” she joked. “But, really, it was like going to plot school. Procedural episodes are incredibly tightly-plotted, like a crossword puzzle.”

“That was a huge addition and gift to my toolbox as a TV writer. CSI is a show that’s episodic [rather than serialized], so every episode can be viewed as a standalone, rather than relying on long character arcs. The crime is created and solved in 42 minutes. These plot skills were a big deal.”

In addition to being an immersive plot school, the CSI writers’ room also taught Goldfinger how shows work and how to work with other writers. It was also a room where it was somewhat expected for all the TV writers to also understand how to be producers.

“On CSI, all the writers went to set and followed the filming of their episodes. All the writers were in post-production, gave notes on cuts and sat with the editors as they re-cut scenes. At the time, I thought every television show was like that, but a lot of shows are not. Most showrunners edit by themselves.”

“There used to be a time where YA was somewhat of a ghetto, meaning once you were there, you didn’t go anywhere else,” she said. “That’s not true anymore. But, only recently, with Jane the Virgin, Charmed, and Trinkets, have I been able to spread my wings.”

“I don’t feel limited by YA. Coming-of-age stories have inherent drama. If it’s the first time somebody has done something, or realizing that friendships are so important, it makes it a great space to work in because the smallest thing can be the biggest deal.”

Goldfinger continued, “Teenagers’ lives are more sophisticated than they once were, their access to media is wider, so they have a sophisticated taste now. With Trinkets, I like that we didn’t talk down to them and assumed their lives were complex. TV no longer underestimates what teenagers are thinking about.”

In the latest Netflix series, Trinkets, the story follows three teenage girls in Portland, Oregon, who meet at a Shoplifters Anonymous meeting.

“Diversity and inclusion have been a thing that has come up in YA shows, but it’s a matter of timing as well. They all have leads of color,” Goldfinger said. When asked about the social responsibility of writing for a younger audience, she replied, “I think the right answer is yes, but the truth might be no. I think it comes down to story and where your characters lead you.”

“Jane the Virgin had a definite feminist bent, which I think is great. Trinkets had so much diversity and inclusion – two of our leads are bi-racial, one is gay – and it’s Portland which is an interesting city. We’re trying to paint a city where teenagers are more woke and grown. They have a deeper awareness than kids in other places that are less progressive.”

In one example in Trinkets, the character of Tabitha Foster (Quintessa Swindell) is profiled while shopping, which is ironic because she does shoplift, but not in the instance in which she’s profiled. To show multiple angles of this situation, audiences see how the character reacts, how the mother reacts, and how the incident plays out.

“She and her mother discuss the profiling, what it means to be a black person in America, and what it’s like to walk into a store and be viewed as someone who doesn’t belong. The conversation was interesting because the two writers, who are both black, and had a lot to say, but they’re in their 20s rather than teenagers.”

“Then, there’s Joy Bryant, who played Tabitha’s mom who had her own thoughts on the issue. The director had other thoughts and everybody is a different generation, so they had different thoughts. The scene is a mixture of all those thoughts and what advice do you give as a parent to your child.”

Without giving too much away, the scene ends with more questions than answers. “You want the parent to say the right thing, for the scene to move forward, but we left it open because [the younger generation] needs to figure it out.”

Goldfinger said they didn’t feel pressured to tell a specific story, but it made sense in terms of better showcasing the character and her life. “We didn’t sit down with the intent of doing this, but we had ignored this part of life and we knew we needed to talk about it. It came from character.”

“Good people make bad mistakes,” Goldfinger said about creating empathetic shoplifters. “You don’t want to glorify shoplifting, but if you didn’t get a rush from it, people probably wouldn’t do it, so you have to walk that line.”

Combining the rush of a misdemeanor with potentially terrible consequences tells a lot about all of the characters. “I think a lot of people struggle with a lot of different addiction issues, and I think the shoplifting thing was a fresh way to talk about that.”

In season 2 of Trinkets, in addition to exploring issues of race, the TV writers also leaned more into examining 12-step self-improvement. “I think it was good to show people struggling with their own demons. That’s true at any age with any addiction, and forgiveness is a huge part of that.”

“No one is free from making bad decisions and making mistakes. The drama of Trinkets is how you sit with those mistakes, how you live with them, how people around you respond, and how you grow out of it and where it’s coming from.”

All of the characters have their own backstories that led to shoplifting, and hopefully, redemption. “In season 2, we started Moe Truax (Kiana Madeira) down a bad road and Elodie Davis (Brianna Hildebrand) and Tabitha strongly come back at her. The public will decide, but I think we did a nice job showing it realistically. Ultimately, it’s more harmful than good and you’ll need self-examination to get better.”

Goldfinger’s background involves TV writers’ rooms full of heavy dialogue and breaking story in the room. “There’s no blank page anxiety in the rooms I’ve been in because there are heavy notes and outlines. Trinkets is no exception.”

As the showrunner, one way she helped remove the office vibe of the TV writers’ room for Trinkets was to actually meet in a rental house rather than an office setting. “There are only a dozen people that make up the writers’ room, so we rented a house, which made for a nice vibe.”

“In the mornings, we met in the kitchen that was actually a kitchen, not a makeshift office with a microwave. There was a really nice, congenial atmosphere. We turned bedrooms into offices and it was more like a commune or collective.” The “cozy” atmosphere helped the team break story “because it felt familial.” She added, “I think the best creativity happens when people are feeling comfortable.”

For the ten-episode, five-hour series, the process was much more manageable. “In the first two weeks, we had pretty much mapped out the entire season and pitched it. It was well-received, so we had a strong road map of where to take the characters. Then, it became episodically fleshing things out.”

Small changes, like introducing a certain character sooner, could also be adjusted since they were creating a show for a streamer. “Once we had our road map, we could talk about things like holidays, and other events. Time moves slowly on Trinkets, so almost everything happens in a semester.”

Then, the final step was assigning writers to individual episodes. “Break it as a group, write it as an individual,” she clarified. “That’s a good system. This is the first show where we did scene punch-ups, which is new to me.”

Essentially, to punch up a screenplay means to put it on the screen – like an overhead – and then have the writers improve individual jokes or individual moments in the scripts.

The showrunner was against this idea in the beginning because it felt potentially belittling to the individual writers. “I’m so sensitive I kept saying, ‘I think it’s going to be mean,’” she said. But, the comedy writers on staff declared they had no hurt feelings. In the end, everyone enjoyed the punch-up.

“There was such a kind group of writers that it didn’t feel like we were saying the script was bad to punch it up, instead you were so invested that you wanted to just make it a better joke. If the whole room is laughing, that’s the winner.”

In terms of advice for writers hoping to enter the TV writers’ room for the first time, Goldfinger said, “You have to socialize with those people who do not want to work in a group setting, but for people starting out, I always say there’s pressure. It’s like double-dutch. You watch the two ropes go faster and you hope you can jump in and not derail the situation, but since you’re a staff writer, you’re only getting paid about one-tenth of what the highest person in the room is getting paid, so if you say one-tenth of the smart things they do, you’re okay.”

“Don’t worry about making a name for yourself early on,” she added. “There’s group-think and the group gets you there. You can talk too much or you can not talk at all. I think the best thing to do is to listen, understand the culture of the room, and whether there is a rank or not. Once you understand the culture, you can participate more, know what pitches land, figure out what your niche is, and where you do your best work. Lean into your skillset.”