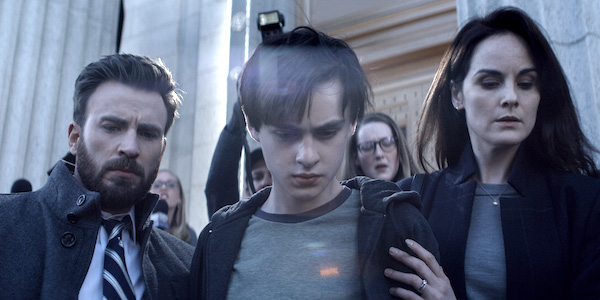 Defending Jacob is a thriller streaming on Apple TV+ starring Chris Evans and Michelle Dockery. It was adapted by screenwriter Mark Bomback (War Of The Planet Of The Apes, Total Recall) from William Landay’s 2012 New York Times best-selling novel. Creative Screenwriting Magazine spoke to Academy-Award nominated director and executive producer of the series Morten Tyldum (Imitation Game, Passengers) on how he interpreted this story for the screen.

Defending Jacob tells the story of the unconditional love and loyalty Jacob Barber’s (Jaeden Martell) parents have for him when it is not clear whether he’s innocent or not. Tyldum was introduced to Defending Jacob after reading Bomback’s pilot episode. He didn’t read the novel until much later. “I really connected with it. There was so much in this story other than solving a murder.”

The TV series explores the impact being the subject of a murder investigation has on the entire family, particularly when the evidence leans increasingly towards guilt than innocence. “It’s really a character study within the framework of a thriller,” said Tyldum. How well do we really know our children and what they’re capable of? “How much does parental love affect our moral compass?”

Differences Between The Novel And TV Series

Adapting a novel into a film or TV series presents its own set of challenges. These range from deciding what is distilled from the book, what is dismissed, and what is made up. “You have to take the spirit and the intention from the book and then you have to rewrite it,” added Tyldum. It’s very difficult to directly transpose the story in a novel to the screen because it’s a different medium.

“The actors will also add things to the story based on who the characters are.” Andy [Chris Evans] and Laurie [Michelle Dockery] are younger on television version than in the book to give the TV series a more modern feel. Laurie is a stay at home mom in the book too. Morten Tyldum wanted the family to be more contemporary, active, and more relatable so he made these subtle changes.

The grand jury scene was the apex of the novel. Bomback and Tyldum opted to tease out the character and moral elements in favor of a major courtroom scene.

“We also changed the ending to make different from the book and to make it darker,” added Tyldum. The director also wanted to leave the ending more open to interpretation compared to the book. “I really wanted the audience to feel they were not sure whether Jacob committed a murder or not.” This only added to the intrigue of the mystery when the questions were only partially answered.

The relationship between screenwriter Mark Bomback and director Morten Tyldum was unique since the majority of Tyldum’s work is in feature film. In television, the head writer is the showrunner and has more control than the director in some regards. This is especially true for Bomack who wrote the entire series of Defending Jacob. Tyldum felt that he was taking more queues from television scripts than he would in features. “A movie director can clash with a screenwriter and has the final say. In television, the showrunner can negotiate.” This speaks to the more collaborative nature of television writing than film which can be more hierarchical.

“Mark and I had a similar vision very early on and become very supportive of each other. It was like having a spiritual brother on set working with you,” mused Tyldum. Both shared the same creative spirit to ensure the success of Defending Jacob.

During the development phase, Tyldum advised Bomback to tighten up some of the storylines and remove a key subplot that didn’t serve the main story. “He would write a scene and I would give him some notes. Then we read the scene out aloud and make further changes.” One big subplot that was in the story for a while was where Andy Barber had another case that kept coming back to him even though he was no longer officially working at the DA’s office. “It took too much away from Jacob, Andy, and Laurie so we removed it.” It took the story slightly out of focus.

This subplot survived for so long because it straddled Andy’s love for his work with being taken away from it. Hel felt lost. An old part of Andy’s life was taken away from him during his suspension. Bringing back one of his old cases detracted from his isolation because he was still working unofficially.

As the showrunner, Mark Bomback could also make script changes on set, especially if there were any day players on set.  He was also an uncredited assistant director. “It was great having someone riding alongside you and shared your vision,” said Tyldum.

Another feature of Defending Jacob is that Mark Bomback didn’t want a writers’ room and wrote every episode himself. This allowed for consistency in the tone and pacing of the scripts.

There were additional differences between the novel and the TV series.

“The book is told more from Andy’s point of view. It is written in first person through Andy’s eyes.” Expanding the story allowed the story to be told from both Andy’s and Laurie’s point of view. This enhanced the conflict because Andy believed Jacob was innocent while Laurie thought he was guilty. There was no definitive evidence to settle the argument.

“Laurie’s doubts became important even though both parents would do anything to defend their son.” This is a bigger story arc in the series than in the book. “Andy doesn’t even want to consider the possibility of Jacob being guilty. Laurie believes they have a moral obligation to discover the truth.” Both are difficult choices for any parent to face.

“Aren’t the parents also guilty if Jacob did it and they try to hide it? Their love for Jacob is unconditional they’re willing to anything, but at the same time, they have a moral responsibility. What happens when your need to protect your son clashes with the truth.? It tears your soul apart.” This character dynamic ensured that the Jacob-Andy-Laurie triangle had equal weighting.

The hereditary nature of violence adds a fascinating spin to Defending Jacob. Mark Bomback conducted most of the research into this, while Morten Tyldum dramatized it. Andy’s father was a murderer. Where does that leave him? Is Andy carrying the murder gene? Does he have the potential to kill? Can Jacob kill through Andy’s genetic predisposition?

Some studies indicate that the “murder gene” may be transmitted maternally. This brings Laurie into the mix too.

“It’s a universal fear we have as parents. What kind of card have I dealt my child who inherited my DNA? Did he inherit my good traits? Can the murder gene be suppressed.”

Tyldum aimed to balance the drama with science. Nonetheless, this question added a unique filter to the story.

All good mysteries rely on hiding certain elements of the plot and carefully revealing them in measured doses throughout the screenplay.

Morten Tyldum has his own views on creating and sustaining tension. “We have to learn something and advance the plot. What do you as the audience or a character know? What do you learn when something’s going happening on screen? Tension is more about what you don’t see than what you see.”

Tyldum believes that pacing out story information creates tension. The audience should be given just enough information to sense that something bad is going to happen. Then they can start imagining possibilities of how the story might play out. These plot points eventually converge at the end of the story to solve the mystery, or at least give the audience a sense of a plausible conclusion.

The director also plays with different kinds of tension in Defending Jacob. Not all tense scenes need to feature heavy footsteps and ominous background music. Tension can be built into innocuous scenes such as the Barber family watching a comedy on TV. Jacob and Andy are laughing while Laurie is withdrawn and mysterious as she ponders the guilt or innocence of Jacob.  “Everything is psychological.”

Morten Tyldum is not a fan of screenwriters telling the reader (and director) how to feel. “Write the intention of the scene. The characters’ actions should illustrate what they’re thinking.”

“Tension works better if it’s dry so the reader can fill in the gaps. Holding back is always stronger. Do not show everything. Audiences love figuring things out. That’s why people love thrillers.”

Tyldum exemplifies his point with one of the final scenes in David Fincher’s Seven. Remember the scene with the box? Will they open it? What’s inside? Do we want to know what’s inside? Can we handle it? A skilled director will create that image. Keeping the box closed creates a different viewing experience than simply opening it early on and the audience gasps in shock.