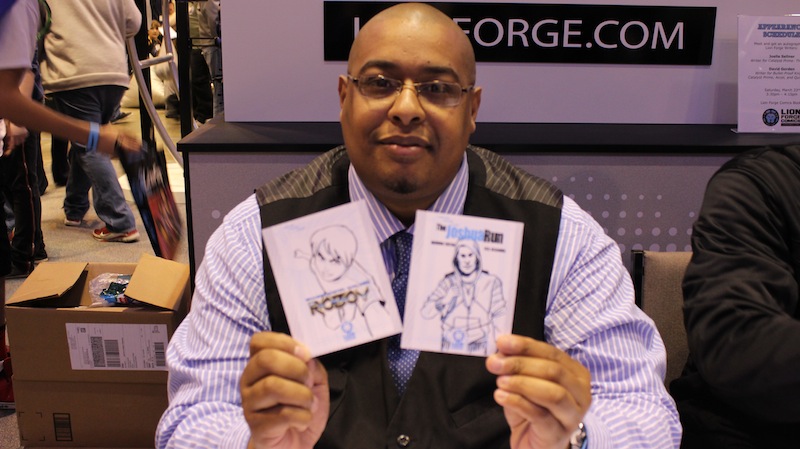 Brandon Easton doesn’t look like Stan Lee, or indeed like someone most people would picture when they hear the phrase “comic book writer.” But in the last several years, Easton has defied the realities of a sometimes less-than-inclusive industry to emerge as a rising force in comics, and he’s done it all without compromising his vision of the world, the business, and his place in both.

A native of Baltimore, Easton studied sociology at Ithaca College in New York before entering the Boston University film and television graduate program, where he studied under Hugo award-winning screenwriter Stephen Geller (Slaughterhouse-Five). One of his major lessons from his BU days: “A lot of people who claim to be film geeks are only fans of things like Kramer Vs. Kramer. The nature of being a geek means you need to be open to the umbrella of cinema, not the umbrella of stories about middle-class suburban white families falling apart.”

2002 brought Easton’s first paid writing gig, the “crazy martial-arts supernatural comic” Arkanium for Canadian-based Dreamwave Productions. He also wrote an issue of Dreamwave’s Transformers: Armada series, but then “a lot of bad stuff started to happen at Dreamwave. Massive financial problems… they started to fall apart.” After a six-year sojourn as a teacher for the New York Public Schools, Easton took the gamble and moved to Los Angeles in 2008, to “go for my Hollywood dream.” By the time he made it to LA, Easton was already under contract with Arcana/Platinum Studios for the publication of Shadowlaw, an ambitious graphic novel combining commentary on organized religion with vampires vs. mechas action. Easton signed with Arcana for the book in 2004, but due to a revolving-door succession of “flaky artists,” Shadowlaw did not see print until early 2012. The persistence from all quarters paid off. Shadowlaw sold out its first printing, and Easton won the Best Writer Glyph Award at the 2013 East Coast Black Age of Comics Convention.

Easton’s screenwriting was slower to bear fruit. “I hadn’t had any contact with the film and television industry since 2000. No connection had heard from me in eight years. So I wrote an email to the two connections I had left, and shockingly, they remembered me.” One of those folks, longtime animation producer Jeff Kline (Transformers Prime), got Easton in touch with Michael Jelenic, then at Warner Bros. Animation. After a long networking process, he helped Easton land his first TV animation gig—co-writing, with Todd Casey, the “Soul Sever” episode of the Cartoon Network’s Thundercats reboot. Easton says the Thundercats experience was a positive one. “They gave me a lot of latitude because it was my first time. I think they were willing to cut me a massive break.”

Easton’s latest endeavors find him in partnership with St. Louis-based Lion Forge, for whom he has written “two humongous scripts” for a forthcoming “steampunk update of Robin Hood.” He has also penned the first issue of the digital comic Roboy, “a throwback to CapCom and superhero video games of the ’80s,” and wrote the script for the just-published first issue of The Joshua Run, a book in the vein of The Bourne Identity, conceived by actor Flex Alexander. Easton is also currently in production on Brave New Souls, a documentary look at contemporary black science fiction and fantasy writers. The genesis of this project was a personal one. “I was tired of having arguments with black geeks” about the lack of creative diversity in genre entertainment. “I need to shine some light on all the creators I know who are doing drop-dead fantastic work. After this is produced and put on the market, I will never tolerate another argument from a black geek, because now they’re gonna get a road map to all the stuff that we’ve created.” Easton has been a tireless spokesman on diversity issues in both the comics industry and the fan community, and his forceful opinions can be found on his blog “The Fool’s Crusade” and on the podcast “The Two Brandons,” which he co-hosts with fellow genre creator of color Brandon Thomas (Voltron).

This year, Easton presented the “Writer’s Journey” panel at San Diego Comic-Con, and while he recognizes that booking this panel was a personal coup, he acknowledges the controversies surrounding the convention. The key issue, he suggests, is “the incessant reliance upon non-comic-book-related material. I have no problem if Twentieth Century-Fox or Warner Bros. want to buy up a million-dollar block of space on the floor, but that shouldn’t be the focus of Comic-Con. None of this would be possible if the retailers didn’t exist, and the retailers are slowly starting to not exist.” That said, he understands the value of events like Comic-Con in helping aspiring writers make connections (both Shadowlaw’s pickup by Arcana and Easton’s work with Lion Forge were the result of convention networking). “Look at a convention,” he says, “as a massive job interview. You need to have a proof of concept. If you want to do a comic book, you better have at least 22 pages of a comic book story done. You have to have business cards, and you also need to adopt a professional attitude. A lot of aspiring people are still stuck in the fan mentality… and when you approach things from a hobbyist’s perspective, you come off like a complete idiot.”

For all of his achievements, Easton is not comfortable being designated as “just” a writer. “A lot of times, writers put themselves into a box. [They] just assume they write the work, they put it out there, and people are magically gonna show up.” Easton instead calls himself a “creator.” “A creator tends to be all things. No one’s gonna care if I’m just a writer, because the democratization of technology has led everyone to thinking they can write. A writer/creator has to do more to get attention from that noise.” Brandon Easton is bringing the noise a little louder every day, and keep listening for more to come.

MATT R. LOHR is the co-author of <i>Dan O'Bannon's Guide to Screenplay Structure, </i>which he wrote with the late screenwriter / director behind <i>Alien, Total Recall, The Return of the Living Dead</i> and other genre classics. An award-winning screenwriter and essayist, Matt's views on contemporary and classic cinema can be found on his blog, "The Movie Zombie." Matt can be reached via email at <a href="mailto:mattlohrinla@gmail.com">mattlohrinla@gmail.com</a>.