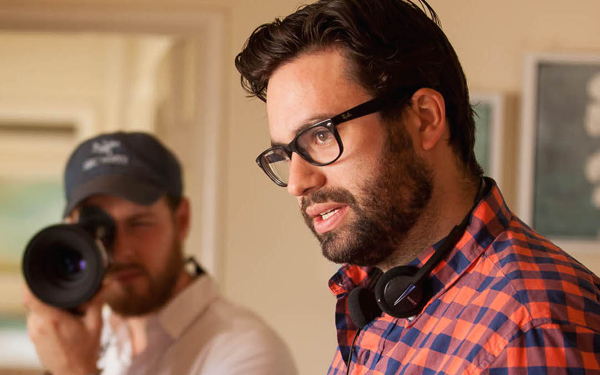 Creative Screenwriting was lucky enough to catch up with both co-writers of I’ll See You in My Dreams. In this, the first of two articles, we interview writer and director Brett Haley.

Defying the adage of only writing “what you know,” Brett Haley’s latest film is about a 70-year-old widow who is forced into a world of dating. How did he write about this credibly? By deciding on a theme, them simply letting his characters speak to him.

The Brooklyn-based writer grew up in Florida Keys and studied film at the University of North Carolina School of the Arts in Winston Salem. On the final night of the RiverRun Film Festival in Camel City, we sit down to discuss the ins and outs of writing with a partner, creating characters from scratch, and writing as a director.

In the beginning, would you have labeled yourself as a writer or director?

“My first focus was always directing, but I learned very young that if I wanted to make independent films and get those films off the ground, then I needed to be a writer. For me, it was important to start writing and discover: what am I going to write about? How am I going to write it? My first film—the New Year—was a $5,000 feature that I co-wrote with my sister-in-law, Elizabeth Kennedy, who is actually a novelist (her book is coming out May 5th). That’s when I learned that I needed a writing partner. I write better with a partner and highly recommend that to those who are struggling.

So when I was thinking of I’ll See You in My Dreams, I had read a short story by a guy named Marc Basch. I really liked it and I wanted to adapt it to a movie. I tracked Marc down, who is also a Brooklyn guy, and through the making of that short film, we became friends. Then, I eventually asked him to write this with me and now he’s my writing partner full time.

What are your writing rituals?

I have a short tolerance for it, so I try to wake up early and before I do anything—coffee, water, bathroom… Instead I write, making it priority number one on the days that I need to write. Sometimes I’ll wake up and go ahead and grab the laptop in bed and just start writing so I don’t get distracted or let anything get in the way.

The best part is that I get to send that copy to Marc, who will tweak it and send more pages back to me. That’s how we do it, back and fourth. We keep going over from the beginning and building on top of that. Despite that we live in the same city, it seems that having it on our own is best.

Where do your ideas come from?

This one came from some themes that I was interested in exploring—love and loss, life and death. The idea of Carol, the 70-year-old widow, was the best vessel to spread those ideas. I get hit by inspiration in different ways. I find myself to be a curious filmmaker, curious writer. I don’t like writing about myself. For the time being, I’m not really interested in what’s going on in my life. Otherwise, I’d keep making films about a guy who is trying to make movies all the time, which is not exactly interesting.

I can get stuck and then Marc takes over—he can then carry the torch. We each have our strengths and weaknesses and we help each other out. I think the Coen Brothers are some of the finest writer/directors out there. I think their screenplays are masterful. They can do anything—any genre, any type of film, and they switch it up constantly. I’m a big fan of films of the 70s, like Five Easy Pieces, Day for Night, Midnight Cowboy, The Graduate—they don’t make them like that anymore. The Beat That My Heart Skipped, The Prophet, Rust and Bone (all written and directed by Jacques Audiard). I really look up to that guy. He writes with other people too. He’s a phenomenal filmmaker.

How does directing change the writing experience?

People say you write the film three times: you write it when you write it, you write it when you shoot it, and you write it when you cut it. You have to be malleable. Things have to change. You can’t be too rigid. There are, of course, things you should stick up for—this line needs to be this way. But for the most part, 9 times out of 10, if an actor has a line he wants to add, then you should just go with it. As a writer alone, you have to give the script up so the director can run with the idea. But that’s just the process of filmmaking. In editing, you’ll notice which lines, scenes or even characters to cut. You’re always writing. You’re always thinking about which items are 100 percent necessary and what’s excessive. A good writer is always writing, always editing and always thinking how to say what you want to say with less. Less words.

In terms of what we shot, this film didn’t change that much, but a lot got cut. At 117 pages pre-shoot, I would say we cut 15 to 17 pages if not more. We cut some pretty big scenes and some sub-plots that seemed necessary on paper but bumpy in the film. You always have to conscious and aware of this during filming and it’s always better to have more—more script, and shoot more, than you think you need.

Do you follow along the Syd Field act structure or do you approach it differently?

I don’t follow any hard-and-fast rules when it comes to structure, but I do believe they can help those just starting out. It can hone people in to keep them from coloring outside the lines. For Marc and I, we just do what feels natural for the characters. We do outline in somewhat of a—this, then this approach, but the structure of movies, film in general, is always in the back of your mind. We’ve seen so many movies that we know what works and what doesn’t. You know when you’re trying something really unique and really new. Whether or not we thought about a three-act structure, I’ll See You in My Dreams most likely has a three-act structure to a certain degree. But we’re not counting pages to say what must happen by page ten. Every script is unique, and I believe there are several ways to write a great script.

I made a feature every year through college, but I didn’t have anyone to help generate material. So I’ve written fifteen features — most of them being garbage. I write a lot. Now I consider myself a writer and I’ve come to love it. I used to hate it.

So what does make a good story?

Something that’s honest and true to its characters. You can have any genre you want, but if it doesn’t have fleshed out, relatable people, then even if it’s Blade Runner, in this sci-fi world, you still need that honesty. It must be authentic. Authenticity is very important in anything you’re doing. Characters should come first—even above story and plot. Story and plot can get in the way of a good screen play. They can interrupt a good screenplay or movie. You need to find a balance of twists and curves plotwise, while still focusing on character—the people, because that’s who your audience is going to relate to the most.

Did you write these characters for certain actors?

I didn’t write for certain people, but I knew that only a few people could play these roles. Specifically Blythe and Sam [in I’ll See You in My Dreams]. There is a very short list of people who can play these roles and do all the things necessary for a 70-year-old character. When we were ready, I worked with my producers and casting directors, I was able to find everyone and these were my first choices. It came down to a lot of factors—who’s realistic, who lives in LA, but every one of these actors were my first choice and we shot everything in eighteen days, all in LA.

What is the most difficult step in the writing process?

I think it’s two things: when you start (getting down the first ten pages or so, defining how your character talks or acts), and there’s also this moment when you hit a wall, when you write yourself into a corner because you have too many ideas flowing. You have to take a step back and see how you got into this predicament. You’ll be feeling good overlooking 80 pages, but then you feel like everything is screwed up. We’re actually going through that right now with a new script, where we are having to go back and reassess. But writing is re-writing. You need to go back and determine what the point is of each scene and those are hard things to do—it’s a lot of work.

Making a movie is a long process. From the inception of the screenplay, to the writing, to the financing. It’s been a long process—any movie is. You can’t make a movie and be done with it in a year. You have to go to the festivals. There are so many things. Even if everything goes according to plan, then you’re still in two years.

Do you have any advice for young writers?

Keep writing. It’s hard, but you have to keep writing. Then you have to let people read your scripts and take notes. Put people around you that you trust. Take other people’s ideas in—writing is not a singular thing. You’re going to be sharing this with people—that’s the goal. You have to share your work. It’s hard work and nobody likes hard work, but if you want to do this thing, then you have to open yourself up to criticism. That’s how you become a better writer. Put people around you that you trust, that you trust their taste. Maybe they’re writers or filmmakers themselves. Don’t get too many cooks in the kitchen, telling you different things. Film people with the same tastes as you—those who like the same kinds of films as you, they know screenplays and they get it. Find a mentor if you can. Having a writing partner is great, assuming they also match your level of taste.

If you enjoyed this article, why not check out our interview with the film’s co-writer Marc Basch: Save the Rat: I’ll See You in My Dreams?