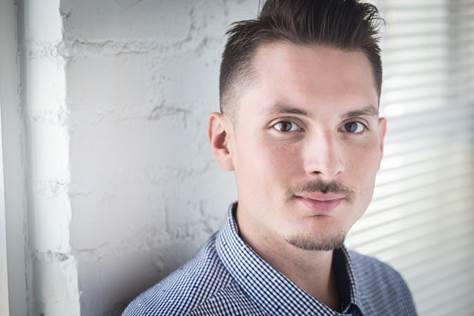 Brian T. Arnold grew up in Bluefield, West Virginia and studied Broadcast Journalism at Concord University. In addition to landing him on the Young & Hungry List, Arnold’s script Friend of the Show was part of the 2018 Hit List and the overall winner of the Tracking Board Launch Pad Feature Competition. He previously wrote for the CBS Diversity Comedy Showcase and performed at iO West and the Upright Citizens Brigade Theatre.

How young and how hungry do you need to be to win a place on the 2018 Young & Hungry list?

Being on this list is a huge honor, but mostly I’m just flattered people think I’m young.

I have a pretty long and eclectic resumé, which is weird because of how very, very young I am.

I studied Broadcast Journalism in college and worked for a while as a morning news producer in my hometown. But, the whole time, I was writing scripts and making short films with my friends, and I knew that’s where my real passion was.

When I finally got the guts to move to Los Angeles, I studied and performed improv and sketch comedy at the Upright Citizens Brigade, iO West, and any theater that would let me come play.

The first project that got me in some doors was sort of a perfect storm of all these various elements of my life. A darkly comedic political thriller about the news media.

Having a background in journalism and comedy definitely helped with both writing and pitching it. Producers and executives want to know why you’re exactly the right person for a particular project, so lean into your experience and your passions.

What personal qualities do screenwriters need to make it?

If screenwriting were graded like elementary school, the best feedback you could get on your report card would be “plays well with others.”

Your first draft is always exciting because it’s just you locked away in a room with infinite ideas and possibilities. But, once your script is out in the world, it’s all about collaboration.

It’s easy to be precious about your baby, but everyone you’re working with wants what’s best for it, same as you. Don’t be afraid to fight for what you love about your script, what makes it uniquely you, but be able to listen to feedback and take notes to heart. If you want your movie to be the best it can be, it really does take a village.

I love movies. It’s really that simple. A well-made film transcends any other art form for me. Growing up in a small town where I never totally fit in, writers from Billy Wilder to Charlie Kaufman made me feel seen and understood. They gave me something to aspire to. I can’t imagine a better feeling than impacting someone’s life in that same way. When I write, that’s always what I’m aiming for.

How do you become someone an agent or a manager wants to work with?

As key as it is to write something good and to have more ideas in the pipeline, I think the most important rule is “don’t be a jerk.” Your potential agents and managers are going to be working with you for years, so be someone a human being would want to be around. A good script gets you in a room, but being kind and hard-working keeps you there.

Where do you get your creative inspiration?

I’m really big on reading current events and history, so often that’s what sparks an initial idea. But most of the time, I don’t want to completely tether myself to retelling a true story.

There’s this improv rule I use a lot in writing: “If this is true, what else is true?” Start somewhere simple, a recognizable character or premise, then heighten to absurd and impossible degrees.

How do you decide which ideas are worthy of pursuing?

Oh man, no matter what I’m working on, I get so easily distracted by shiny new ideas. Like a dog chasing squirrels. But if in those moments you try to catch them all, you’re never going to finish anything.

When something new does strike my fancy, I jot it down in a notebook or Word doc, and I let it sit there. If after a few days or weeks that idea is still pinging me, or if I open up the doc and it still hits me the right way, I know it’s worth pursuing. If not, that’s fine too. You gotta let some squirrels go.

Do you have a writing brand in terms of interests you gravitate towards?

My absolute favorite genre is “thrillers starring characters who are completely unprepared to be in a thriller.” I think The Coen Brothers do this better than anyone. A flawed but ultimately normal person makes one really bad choice, and a terrifying world beyond their understanding comes crashing down on them. That’s my jam.

How do characterize the current state of the industry and opportunities for emerging writers?

It’s awesome there are so many platforms out there these days: theatrical, streaming, VOD, the back of a cereal box, what have you. But, when I write, I don’t really think about where my script might end up. Those calls are made by folks way above my pay grade. Just focus on making your script the best it can be. The rest will figure itself out. Good writing and unique voices are always going to find a home somewhere.

Studying improv really had a positive impact on the way I write. Improv is all about making a choice and then following that choice wherever it leads you. Committing to it. They say there are no mistakes in improv because whatever you do, you can justify it and keep playing your game.

As a writer, I used to be so paralyzed trying to come up with the perfect next scene or character move, charting out every detail. I still outline the big moments I have to hit, but I love the freedom of letting my characters make decisions in the moment and watching what happens to them next.

What are the qualities of scripts you read that don’t get industry interest?

I think the biggest flaw I see in a lot of scripts is a lack of point-of-view. When a writer is trying to write something because they think it’s the kind of script that sells, it shows. It feels soulless and paint-by-numbers. Bring your heart to it. Wear your passion for it. If you don’t love what you’re writing, no one else will either.

What advice do you have for screenwriters wanting to make next year’s Young & Hungry list?

Trust yourself and write what you love. I had the idea for this script years ago, but I didn’t think I had the skillset to actually write it. So I put it off and put it off, wrote other things that went nowhere. When I finally buckled down and made myself go for it, my whole world changed. Trust your ideas. Get them down on paper and put them out in the world. It’s worth a shot.

Also, be young. Like me. It’s on the record now and can never be taken back.

My sister and I wrote a script for X-Men 2, but for some reason, Fox did not return any of our emails. Maybe because I was 14? Talk about young and hungry. Am I right? Sorry. That was the last one, I promise.