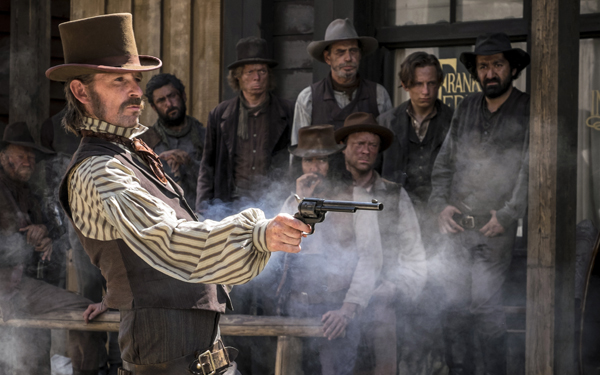 “When I write by myself there are no rules.” Martin Koolhoven on Brimstone

Any doubt as to the authorship of the new western Brimstone is cleared up in the opening title card, which proclaims “Koolhoven’s Brimstone.”

Koolhoven is the Dutch writer/director Martin Koolhoven, who ensured that level of “name in front of the title” control by foregoing American studio financing in favor of funding from a veritable United Nations of foreign capital sources, including English, Dutch, German, French, and Swedish money.

Structured using literary conventions as much as cinematic ones, Brimstone unfolds in four Biblically named chapters that leap back and forth in time to tell the story of a mute midwife (Dakota Fanning) and the Dutch Calvinist preacher (Guy Pearce) who doggedly pursues her across a grim, violent, and often sadistic late 1800s old west.

With the film available now on VOD and in limited theatrical release, Koolhoven talked to Creative Screenwriting about getting stuck on character names, the evolution of Brimstone’s non-linear structure, and how his film is spiritually connected to Tarantino’s Django Unchained.

What was the first spark of inspiration in the creation of Brimstone?

It was actually quite strange, because normally you start with an idea that’s a bit more concrete. What happened was that the last movie I made, Winter in Wartime (2008), was by far my most successful movie, and was sold to a lot of countries around the world, including America. And when you have a big success Hollywood starts calling.

So they started to offer me scripts, but I didn’t really like any of them. But at some point a producer said to me, “You should do an English language movie now. If you could do any movie, what would you do?” And I sort of joked, “I’d do a Western.”

This was before Tarantino had even announced Django Unchained, so the Western was completely dead. But this producer said, “Well why don’t you?” And I thought, “I’ve just made a movie that did very well. If there’s ever going to be a time when I could write a Western and have it financed it’s probably now. So if I don’t do it now, it might never happen.”

I started thinking about what it is that I actually love about Westerns, and I came up with the idea that it’s this sense of freedom that I think especially appeals to men – and even more so to boys. As I was thinking about that I realized that was of course only half of the story – for females it was not so free at all. And when I realized that I knew I had to do a Western from a female perspective.

That was half of the origin of the script. The other half was that if I was going to do a Western – a genre with so many great movies – I needed to make it personal, and use my cultural background. That’s how I came to include this idea of the Calvinistic beliefs of Dutch immigrants who came to America, which I’d never seen a movie about. So basically those two things – the religious aspect and a Western from a female perspective – are what Brimstone sprouted from.

Isn’t there an element of determinism to Calvinism? I ask because the inciting incident in Brimstone comes when Fanning’s character makes a decision to save a mother during childbirth instead of the baby – which draws the ire of Pearce’s preacher, who believes that was God’s choice to make.

I read that when you first hit on the idea of doing a Western you initially bought a script and tried to adapt it.

That’s true. It was more of a post-modern thing that was very tongue-in-cheek. But as I was writing it at some point it just didn’t feel right, and I threw it away.

Do you have a favorite era of Westerns?

I love the great John Ford westerns, but my favorite Westerns are the ones that came after the 1960s – the Spaghetti Westerns, the Peckinpah’s films, the Westerns that Clint Eastwood directed, and McCabe and Mrs. Miller. But there are so many great Westerns.

The Westerns of the Hollywood studio era in the 1940s and 1950s often romanticized the West, but the Westerns you just mentioned largely demythologize or at least deglamorize the era. Brimstone certainly does that, depicting the American West as a brutal, cruel period, especially for women.

That’s true, but if you look at Westerns through all the ages, it’s maybe the best genre in terms of reflecting the times the movies were made in.

The Westerns from the 1940s and 1950s were very much in sync with their times. If you look at the Westerns from the 1960s – the Peckinpah movies for example – they were made in the era of Vietnam, so there was a lot of criticism of America. And if you look at the Westerns now – even a movie like Django Unchained, which is a very different movie from the one I made in terms of tone – they are giving a new perspective on history.

Django Unchained looks at that period through different eyes, showing the black experience, and my movie looks at the era through female eyes. They’re both movies that look at history in a different way. It’s not something that I really thought about as I was writing Brimstone, but at some point I realized that even though I made a movie that is completely different from Django Unchained, I think they are in some ways spiritually connected.

Let’s talk a little bit about your specific writing process.

Don’t ever take me as an example! [Laughs.] Most writers say you should try to write every day and I can’t do that. I write when I get inspired. Very often I’ll write in the middle of the night. Sometimes I’ll get stuck for three days because I can’t think of a character name. Any normal person would go on and fix the name later, but I get stuck and I won’t go on until I find the right name.

I do try to outline before I start, but I’m such a mess. I’ll start writing, then throw it all away and start again. Then I’ll get what I wrote before out of the dustbin. Right now I’m writing with somebody else, so things are a little bit more structured. But when I write by myself there are no rules. I do everything you’re not supposed to do.

Since you mentioned getting stuck on names, how did you come up with the name Frank’s Inferno for the saloon in Brimstone’s second chapter? In so many Westerns there’s just a generic “Saloon” sign hanging out front.

I don’t want to give too much away, but Hell definitely has a place in this movie. The whole second chapter in a way is a representation of Hell, which is also why there’s more of the color red in that chapter.

With this being your first English language film, did you write the early drafts of the script in English?

No. My English is OK, but I wanted to be 100 percent comfortable.

Very often I get American scripts and there’s a word or two that I need to look up. But somehow when I get scripts in English that are written by European writers I never have to look up anything, and I always thought there was something odd about that.

So I completely wrote the script in Dutch, and I got a guy to translate it who not only translates movies but also translates literature. Then I would go over his translation and re-write it, and he would check whether I did it right.

Was the structure of the four chapters and the jumps in time already present in the first drafts?

No, at first it was a linear story. Then at some point I realized that I would have to find a structure that could incorporate the past, because I felt that the past was such a big part of the story that I couldn’t do it justice by just showing flashbacks.

So after a few drafts I went back to the drawing board, and I wrote a treatment in the shape that the film is in now. In that version the first two chapters are close to what you see in the finished film, but the second half changed in future drafts.

I was fiddling around with the ending, which I didn’t like, but as you often realize, it wasn’t the ending that was wrong but something that came before it. In the case of Brimstone it was the third chapter, and once I changed that chapter I realized what the fourth chapter should be.

Those different chapters feel a bit like different genres – the Exodus chapter is the most like a traditional western, while the final chapter is more akin to a thriller. Did you think about that when you were writing?

I don’t think I completely set out to do that upfront, but I became aware of it as I was writing, and I started to embrace the idea that there are tonal differences in the chapters.

Finally, once the script was finished, I understand you got it in the hands of agents in a bit of an unorthodox way?

When I send a script to Dutch actors, they’ll read it and want to be in it. So maybe I was a little bit arrogant, but I sent the script to some Hollywood agents and it didn’t get read.

Then I hired a casting agent named Des Hamilton (Only God Forgives, Bronson, Melancholia), and he told me, “I’ll give the script to the three or four biggest agencies in town and if I tell them they have to read it they will do it and they’ll be calling you.” And within 24 hours of the script being put on the desk at those agencies, everybody started calling me and asking me if I’d consider certain actors and actresses.

From that moment on it was like being in a candy shop. 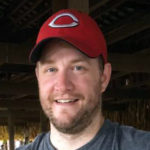