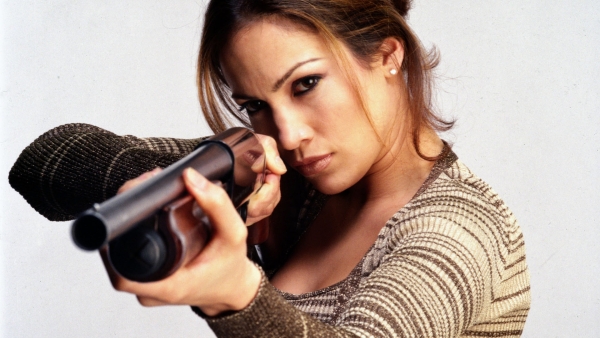 Out of Sight’s screenwriter, Scott Frank, remembers settling into a night at the movies at a Pasadena theater with his wife and his parents. It was May 1998, so the trailers for the summer movies rolled along: Armageddon, Saving Private Ryan and, finally, Out of Sight. When it finished, a woman directly seated behind Frank offered her instant analysis.

The woman proved prescient—kind of. Despite its impressive cast—George Clooney as the bank-robbing antihero, Jennifer Lopez as the no-nonsense federal marshal he falls for in the trunk of a car, Albert Brooks as a financial sleaze—Out of Sight disappointed at the box office. (“We just got killed” is Frank’s blunt opinion.) That the noirish romance got critical raves did little good. As Peter Bart outlined in his book, The Gross, Universal rushed the Elmore Leonard adaptation to open July 4th weekend—Meet Joe Black wasn’t ready for release—with a less-than-inspired marketing strategy and against Michael Bay’s big-budget behemoth Armageddon. It was doomed.

Time has healed the wounds and rebuilt the movie into a classic with undeniable impact. It paved the way for George Clooney’s transition from TV star to leading man of substance. It seems outlandish to write this now after Traffic and Ocean’s 11 and Side Effects, but Out of Sight revived director Steven Soderbergh’s career, which had been lagging since the surprise success of Sex, Lies, and Videotape in 1989.

Soderbergh’s involvement in Out of Sight almost didn’t happen. Director Barry Sonnenfeld, who worked with Frank on Get Shorty, was originally attached to the project before bowing out. Soderbergh, meanwhile, had to be coaxed into the gig. “Casey Silver, who ran Universal, is the one who really wanted him to do it,” Frank remembers. “It was his for the taking. Casey said, and I’ll never forget this, ‘If you don’t do this movie, it means you don’t want to direct movies. This is so up your alley, you have to do this.’”

Out of Sight had special significance for Frank. Not only did it lead to a highlight in a 30-year career as a screenwriter (Minority Report, Little Man Tate) and director (The Lookout), it led to a raft of honors, including an Oscar nomination for Best Adapted Screenplay. The accolades left Frank bewildered since “I thought it was our little crime movie that we all made.”

In July ’13, less than a month before Leonard’s death at age 87, Frank spoke extensively to Creative Screenwriting about his involvement in bringing Out of Sight from the page to the screen. And in this special two-part article we are pleased to bring you that interview, which has been edited for clarity and conciseness.

George Clooney as Jack Foley, with Jennifer Lopes as Karen Sisco, in  Out of Sight

You’ve said that you wrote Out of Sight because you needed to buy a bigger house, but did anything aside from the payday appeal to you?

Well, I obviously liked the book. I was being somewhat glib, although it is truthful. I had adapted Get Shorty and it was very difficult because what I love about Elmore Leonard’s novels make them tricky as movies. And for me, at least, movies are more plot-bound and the books tend to be less interested in plot and more interested in going in directions—sometimes 2/3 of the way through a novel, he’ll introduce a brand new character. And it’s trickier do that in a movie. Get Shorty was very much a book like that. It was a very difficult adaptation. It took me a long time. When I first met Elmore he had told me all these horror stories about all these various projects, books of his, that had been ruined as films. I felt like I just barely got away with it on Get Shorty. The pressure to do it again, I didn’t want it.

At first, I had no intention of ever doing another Elmore Leonard novel. It’s not that I had read this novel [Out of Sight] and said no. I had never even read the novel. I just sort of in mind had said, “I don’t think I want to do another one.” Then about this time, I had three kids in relatively short time, they were all in one bedroom in this little house in Los Feliz and we needed more space. And I realized I didn’t have more money [Laughs]. So, I read the book and I thought, Oh, I really like this book. This one will be a lot easier than Get Shorty and I can do this much faster. And so I should do this as a job. I think I can do it.  The joke was it took me just as long and was, if anything, more difficult than Get Shorty. My original impetus, I have to admit, was probably more mercenary than coming from any sort of place of passion.

(Later, Frank added: “I’ve been very, very lucky. I’ve been doing this since 1984 and for the most part I’ve been able to do whatever I wanted to do wherever I’ve wanted to do it, which is pretty lucky. I’m certain that any day now that will stop. Most of the time I’m working on something I really want to be working on, unless I’m doing something for the money. And if I’m doing something for the money, it’s so that I can afford to do something I really want to do. Or pay for another year of NYU for my oldest daughter.” His dream project: to write and direct an adaptation of an Elmore Leonard novel.)

With this and Get Shorty, did you have any reservations about becoming an Elmore Leonard guy?

That was the other thing: I didn’t want to do that. Sometimes you don’t get a lot of credit for adapting those novels either. I remember reading a review in Rolling Stone where [Peter Travers] was talking about all the great gobs of Elmore Leonard dialogue there was in Get Shorty, all of which was my dialogue that he was quoting. So, you don’t get a lot credit for it. It’s a tricky thing. I love Elmore Leonard, [but] like I said, I felt I had just barely gotten away with it once. And I didn’t know if I had the skill to get away with it twice. I thought it was just luck. So that is what I was nervous about, and I like to try to do something different every time if I can.

I really did like the book a lot. So I can’t say I did it without any sort of affection for the novel. I really did like it. I think it’s important to note that. I didn’t have any expectations other than I need a job, here’s a job, I know all of the people involved, I’m going to take this. I had no idea that it would become my favorite project I ever worked on.

John Travolta as Chili Palmer in Get Shorty

What were the challenges in adapting Get Shorty and Out of Sight?

It’s a couple of things. The fun of reading those books is that they keep changing direction. Because you don’t know where it’s going to go and, in fact, Elmore Leonard doesn’t know where it’s going to go when he sits down to write the book. He doesn’t do an outline. It’s not fun for him to know. He likes to surprise himself as he goes. Movies are different. You only have so much real estate: 120 pages. So you have to be careful. For me, at least, the only way I know how to write a movie is to organize them a certain way and that is sort of knowing where I’m going, for the most part. I know other people don’t work that way, but I’m a little OCD. I need to know everything and it has to have a certain kind of structure that I can see. That’s part one.

Part two is there are gobs and gobs of beautiful, gorgeous dialogue. And, necessarily through the process of adaptation, you have to cut that dialogue. It is poetry in a lot of ways, and so you cut it and ruin it. So you have to be careful what you do, and oftentimes you’re using his dialogue but you have to invent new dialogue that sounds like his dialogue. That’s very difficult because there is only one Elmore Leonard, and I don’t pretend to be able to write anywhere near the level of good dialogue that he does. The challenge is you’re trying to cut that dialogue and adapt into a movie without trivializing it.

The one thing I noticed in reading Out of Sight, which I thought might be an issue for you, is that the dialogue serves as exposition.

He tells his stories purely through the dialogue, whereas in a movie the old adage is “show, don’t tell.” It’s the opposite and so it’s very, very tricky to convert that into a movie. The other challenge with Out of Sight in particular, was that she [U.S. marshal Karen Sisco, played by Lopez], while kind of cool, was in movie terms what you’d call one-note. She doesn’t really change. So, for me she was the least interesting character. While I understood that was [Leonard’s] inspiration for writing the novel—seeing this woman in a Chanel suit with a shotgun on her hip standing outside the Dade County Courthouse—I thought he [Jack Foley, played by Clooney] was a much more interesting character because it was all about the road not taken, a guy who is so disappointed with the choices he made that it was so sad: he meets this woman he can never be with. He’s much a sadder character. That intrigued me much more than she did, even though I loved her as a character. I thought the book was about her, but the movie for me, necessarily, had to be about him.

…Like all great characters, he was supremely confident. He had so much confidence, and that to me is always the most important trait in any character. Confidence followed by sense of humor. Sometimes you can reverse them, but he had both. He was very smooth. When he walked into that bank and robbed the bank, his whole style. Everything. He wasn’t screaming, “Stick them up!” [Laughs] He walked in really cool and comfortable, really ballsy, just chatted with [the teller and] got everything without ever showing a gun.

George Clooney as Jack Foley in Out of Sight

This interview continues in Part II.