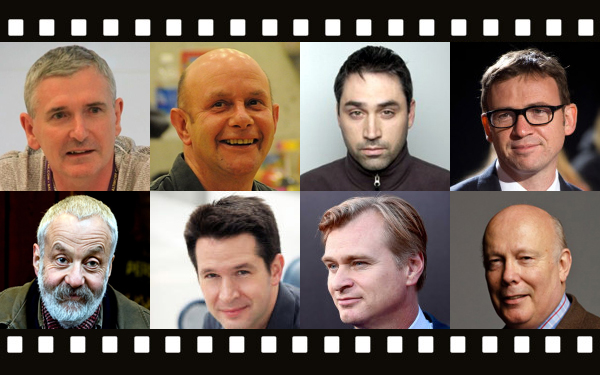 It is almost a truism to point out the number of British actors doing well in Hollywood. Long gone are the days when an upper-class English accent consigned an actor to playing the villain, and a younger generation of British actors such as Benedict Cumberbatch, Eddie Redmayne and Idris Elba are arguably as well-known as their A-List American counterparts, joining the host of older stage actors such as Judie Dench, Patrick Stewart and Ian McKellan who have long been an established part of Hollywood film-making.

But it is not just British actors making it big, but also British screenwriters, both those working in Hollywood, and those within the British film industry whose films are an equal success across the pond.

Creative Screenwriting itself has taken tea with its fair share of Brits over the years, and in this article, we celebrate some of those interviews.

Intriguingly, when looking through our archives we noticed that nearly all of the films involving British screenwriters were either science-fiction or period-pieces. Whether any conclusions can be drawn about this, we will leave others to judge. But in the meantime, we hope you enjoy our selection of quotes, and encourage you to check out any of the interviews you may have missed the first time round!

Can there be a more quintessentially English screenwriter than Julian Fellowes?

I think any series, show, movie, or play sets its own style. You have a kind of behavioural pattern, a kind of morality, a kind of mixture of comedy and drama, whatever it is. They are all perfectly valid, but you have to be careful that having established your style, you then are true to it, and you don’t suddenly go wandering off in another direction. Of course, when one type of series turns into another one it is very distracting and doesn’t really work.

There is more to Britain than the stories of upper-class English families, and Mike Leigh is the man to prove it. Perhaps best-known for his contemporary dramas, we had the opportunity to speak with him about his Oscar-nominated period piece Mr. Turner.

If the proposition is that a screenplay should have three acts, I would say that’s not rocket science, because you can’t help but have three acts. You set up the premise. You challenge the status quo. Then you resolve this. Those are the three acts. That’s all there is to it.

After we chatted with him about The Imitation Game, Graham Moore went on to win the Oscar for Best Adapted Screenplay. Coincidence? Yes, probably.

There is a tremendous responsibility when you’re telling a true story like this to tell it right, accurately, and to convey the essence of a person. The goal was always “can we open up Alan’s mind to an audience?” We always talked about this as being a subjective film – the story you’re hearing is from Alan’s perspective. It’s Alan’s voiceover that narrates the piece. Every scene is shot from Alan’s perspective. The camera never rises above Alan’s eye level – that’s one of Morten’s little notes, because it’s all shot from Alan’s point of view. And in the writing as well, we always wanted to tell Alan’s story – because his is the story that so deserved to be told, and hadn’t properly been told before.

A Story That Had to be Told

David Nicholls is not just a period-writer, but he is perhaps best known for his adaptations of classics such as Great Expectations and Far from the Madding Crowd.

In the case of all three adaptations I’ve done from classic texts, I’ve consciously decided not to revisit previous film versions. My knowledge of those films comes from my memories. I wanted to go back to the original text. I didn’t rewatch those films, but at the same time they are burnt into my memory.

Recently Oscar-nominated for his screenplay Brooklyn, for many people, Nick Hornby will always be the man who unleashed Jack Black onto the big screen in High Fidelity.

I absolutely love writing minor characters. One thing that I think I’ve realized is that minor characters are where it’s at in terms of lifting the quality of a film. You have to take care of your leads, but if people love minor characters you’re on a different plateau. Then it feels like the movie is being made with love and care.

For a start – and this is a huge thing – if you’ve written a proper part for a minor character you’re going to an actor of an altogether different magnitude to do it… Independent filmmakers especially talk all the time about “casting up” because you need all the help you can get, and the best way to cast up is to make sure that the minor characters are interesting, funny, different, and memorable. Then if you want to send the script to a really good actor and say, “Look, it’s a day or two day’s work, but you get to say this” then something really great could come out of it.

The Nolan brothers are responsible for some of the most spectacular – and mind-bending! – sci-films ever made. OK, so they are only half-British, but there are two of them, so we reckon that counts.

As a writer, particularly in the thriller genre, you have so much advantage over the audience. You have a year to write the thing, whereas the audience has ninety minutes to digest it.

Remembering Where It All Began

I view my job in screenwriting mode to pack ten pounds into a five-pound bag. Laying out a feast…”here are ten cool ideas – use four of them to make the film.

Ex Machina, 28 Days Later, Dredd, Sunshine…If it is stylish and thought-provoking sci-fi you are after, look no further.

I’ve worked on three adaptations, and I’ll always make sure I’m not shutting out the writer and I’m in contact about the process and why decisions are being made a certain way. But ultimately your loyalty is to the film, not the novel.

OK, so he was educated in the US, but he was born in the UK. And on the same day as our web editor!

I think it’s not a coincidence that both Deadpool and The Martian were successful movies and movies that had the same writers from start to finish. I’m a big believer that having one writer the whole time is better than having a lot of different writers coming in and punching up scripts because I think it makes for a more organic, singular movie when you have that.

Our editor-in-chief Sam Roads ventured into a London pub to interview Mike Carey about his film The Girl with All the Gifts.

I see the point of structuralism, but there seems to be a stultifying effect that comes from dwelling on the fact that when you take away all the things that make stories unique, yes, they start resembling each other.

That doesn’t strike me as a deep insight. I would rather get things wrong by playing with a set of ideas, a set of characters, a set of situations, and then seeing what structure arises. I’d rather do that than start from the sense that “This story needs to do X, Y and Z in order to be shapely,” in order to be fit for purpose.

The Girl with All the Gifts

That’s Not All Folks!

These are just a some of our interviews with British writers and directors. Want more? Then check out some of the articles below!

The Two Faces of January‘s Hossein Amini on articulating action, the advantages of directing your own work, and shooting cats.

Morwenna Banks discusses writing rituals, her latest film, and the importance of holding on to your vision.

Stephen Beresford tells us all about when sexuality met politics.

Rupert Goold: Getting that Kubrick-y Feel

Rupert Goold discusses flawed characters, homoerotic underpinnings, and the themes that attracted him to True Story.

Writer-director Caradog James on the process of taking his new film The Machine from script to screen.

Ol Parker: The Sequel That Was Never Supposed to be Made

Screenwriter Ol Parker discusses working with great actors, the challenges of writing of sequels, and retiring to India.

John Yorke: What You Don’t Do is David Copperfield II

John Yorke discusses his new book on Screenwriting, offers invaluable advice to screenwriters, and reveals the secret of the Duff Duff moment.