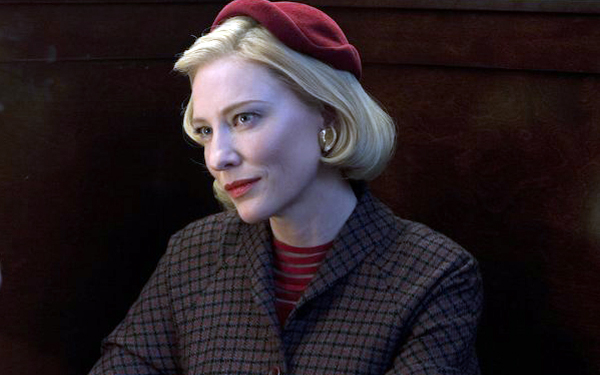 Stylish, tender, and bold, Carol is a film that was eighteen years in the making. Adapted by Phyllis Nagy from her mentor Patricia Highsmith’s novel The Price of Salt, it’s an arthouse film about a lesbian relationship that is both accessible and engaging.

The production whirled through a carousel of directors before finally pairing Phyllis Nagy with director Todd Haynes. Nagy expressed relief at finding Haynes, considering him of kindred mind with respect to honoring the tenor of Carol’s source material. “Less is more,” Nagy and Haynes agreed.

As merely the latest of Nagy’s adaptations to be produced, following her HBO movie Mrs. Harris (for which she won writing and directing awards, in addition to Emmy nominations) and a bevy of stage plays produced in the UK, Carol beckons a broader look at Nagy’s screenwriting career and ethos. Nagy spoke with Creative Screenwriting about her commitment to Carol, the kinds of books she seeks to adapt, her opinions on writing for plays, screen, and television, and how she rations her writing time.

It’s been almost twenty years since you began writing Carol. What enabled you to persist with the project for so long?

Initially, it was that I knew Pat, and this project came to me a couple of years after she died. So I felt a strange responsibility to take it, and to make sure that it wasn’t screwed up in some fundamental way, because she so disliked many of the screen adaptations of her work.

Some quite good, famous films, she just had no time for, because they fundamentally changed the nature of her source material, which to me is a huge no-no in adaptation. If you’re going to go out of your way to take on the translation of a vision of a piece of underlying source material, and you’re going to change that so profoundly, why don’t you just write a story with the same plot? Because that’s essentially what you’re doing, you’re borrowing plot: the least, least interesting element of any piece of dramatic writing. And, making a novelist, poet, or whoever you’re taking from very unhappy. So I felt that burden—and not a negative burden, just a burden—to Pat.

Also, the story held personal resonance for me; I found its treatment of the sexuality of the two female characters quite radical, especially for something that had been published in 1952. There’s not an ounce of guilt, there’s not an ounce of regret, over the nature of their attraction for each other. I also found Highsmith’s notions of what makes a good mother to be quite radical—the choices that people have to make in order to make the lives of their children better seemed really fresh, and radical. And still do, to this day, actually.

Rooney Mara with director Todd Haynes on set of Carol

You said you found the story personally meaningful.

We’ve all had that first obsessional love; whether or not it works out, we all know what that meant to us. Therese is quite an odd creature in the book, a rare bird, the ultimate outsider in many ways, which is something that does attract Carol to her. And I identified very strongly with the character of Therese.

Both Mrs. Harris, from your HBO film, and Carol, behind or despite their regal and respectable veneers, seem to bind themselves and their male lovers in a pattern of torment that doesn’t really serve anyone. Did Mrs. Harris find her way into Carol’s character?

No, but I think that there is a point to be made there—we are attracted to the same things over and over again. And those are the kind of lives we want to explore, the kind of complications we want our characters to have. So, yes, I mean, subconsciously, Carol would appeal to me—or actually, it would’ve been Mrs. Harris, which was another obsession of mine, for many years, that story. But they’re both complicated, difficult, prickly, not entirely likeable, women, who do extraordinary things, in opposite directions of course.

Mrs. Harris has somewhat the feel of a stage play—how did you segue from a playwriting career into screenwriting?

Once I became successful in the UK as a playwright, people would ask me to write screenplays all the time. And I kept saying no. I have quite specific goals in that way that have never changed, in that if I’m going to write for hire, I’m just going to write adaptations. Because original scripts are not for anyone else to do but me, and the emotional investment is different in them, at least for me. One can walk away from them.

In choosing or agreeing to adapt a book, what are you looking for? Are you repeatedly drawn to anything?

The Luneburg Variation, by Paolo Maurensig

I think it’s just quite tricky books where other people say, “Oh, I can’t see how you could ever put that into a film!” I’m like, “Oh, I’ll read that one!”

I’ve done one of those recently, which is a novel called The Lüneburg Variation, which is an Italian novel, which is, I don’t know how to describe it—a very slim volume written almost in aphorism. It is a Holocaust revenge thriller set in the world of international chess, and it’s full of men. So, this is quite different, obviously, from Carol. But it’s another “problem” novel.

And I’ve just taken one on for TriStar, a “problem” thriller—which is yet to be published in English, but will be next summer—a novel called The Trap, by a German novelist, about a woman who hasn’t left her house in twelve years, but has to, in order to elicit a confession from the man who murdered her sister. So, it’s quite an interesting psychological thriller.

So, when you say tricky, you mean not only psychologically—

Structurally. Yes, because again, there is a lot of interiority going on in The Trap. And a lot of reverse positioning. The point of view shifts as it does in Carol. And plus, I like where I can—not improve the book, that’s not what I’m trying to say—in some way, enhance the experience of the book for people who know the material. And if people don’t know the material, then it’s an entertaining, hopefully meaningful, ride.

You not only wrote, but also directed, Mrs. Harris—how did your first stint as film director come about, and how did it affect your revision of the script?

After I finished the first draft of that script, and Liz Karlsen brought me in to talk about directors, I knew she was going to ask me who I thought could direct this. I thought to myself, “Well, I want to direct it.” But I didn’t say that. I came up with four names of people that I didn’t think would screw it up, and basically, she didn’t want any of them. [Laughs.] And she said, “Well, I think you should do it.” I thought, “Oh! Yes, very smart woman, thank you.” [Laughs.]

Of course, I’d directed a lot of theatre, but I hadn’t directed a birthday card video, you know. It was a huge act of faith on her part. When you’re directing something, you’re much harder on your script than you would be if you weren’t directing it. I still went through the whole process I go through, and then when HBO came on board, we had a little more of that, but it was a pretty normal process.

Films were really my first love, when I was a kid. I saw films every single day of the summer. I lived in New York, so there were repertory houses everywhere. So as a quite young kid, I was seeing things that were probably inappropriate to see—in those days, you could. Now, my parents would be arrested, but never mind.

In any of the writing you’ve done, have you found routines—or vices—that’ve proven to be productive for you?

If I’ve got two months to write something, I’ll spend the first month and three quarters doing anything else—I’ll obsessively read the book, make notes, and then never refer to them again. But I’ll go out and go to a baseball game, or go to a bunch of movies, or go to Vegas, or something, then write the whole thing at once, at the end of that period, from beginning to end.

The Price of Salt, by Patricia Highsmith

So, in two weeks?

You’ve said that that’s how Patricia wrote The Price of Salt.

Yes, she wrote The Price of Salt in a feverish two weeks.

And you do that with plays as well?

As film was your first love, can you point to any particular filmmakers who inspired or guided you?

I think the two that always, always come to mind (and of course, this list changes, too)—very early influences, and abiding influences, would be Billy Wilder and Bob Fosse. As a young person watching their films, those two had a profound influence on my view of both writing for film and what kind of things you could do in film, that didn’t have anything to do with special effects or anything other than a break from a certain sort of narrative convention.

And do you feel you’d prefer to use the tools of filmmaking or screenwriting to achieve a certain quality of character sketch or study, as opposed to, say, a “Great Film?”

No, I tend to be with the Continental Europeans on this one. I think screenwriting is an art, it’s not just a craft—if I thought it were just a blueprint for people to sort of stomp on and create a new building, I wouldn’t do it. I think screenplays exist to create a metaphor—an artful metaphor—on which the imaginations of the rest of your collaborators can thrive and work to the best of their abilities. I don’t think anybody works to their best potential with the skeleton of anything.

Do you enjoy and thrive on that collaborative checks and balances system of filmmaking, where you’re getting notes from everywhere, or would you prefer more solitary autonomy?

For most young screenwriters – and this is true of me, too – there’s a difference between writing a screenplay in your room, and writing a screenplay that somebody will want to produce. Sometimes differences are really subtle, but it’s about your visual acuity, and your lack of interest in what I like to call, “show me, look at me” writing, which tends to be a sort of hyper-verbal, gymnastic trampoline act. Which is really not very interesting, because nobody really likes to hear people be that clever.

Do you feel those differences between what you’d write alone and what people would want to produce are more prominent in screenwriting than in playwriting? Do you prefer one form over the other?

They’re so different. Not a lot of playwrights make good screenwriters. There are more playwrights, for some reason, who do better in television—television, screen, and the stage are three very different temporal structures. If you’re a playwright, who writes wordy plays, where people just sit and gab at each other, and you have a bunch of episodic scenes—scenes set in a café, this, that, and the other scene—those are the people who, I think, tend to make much better TV writers than they do playwrights or screenwriters. But the playwrights who would envision a complete theatrical setting, and understand the importance of setting in theatre, actually tend to do much better on screen, because that’s what you need: a very particular sense of place, why things are being set in particular locations, and how it all rolls visually.

They’re all so different—I don’t know what I prefer; I think probably, right now, today, screen. But, I may end up going back to the theatre and have a good long run of it.

Jennie E. Park is an artist and attorney in Los Angeles. She also contributes to <i>Artillery</i> and <i>M/In the Art World</i> Magazine.