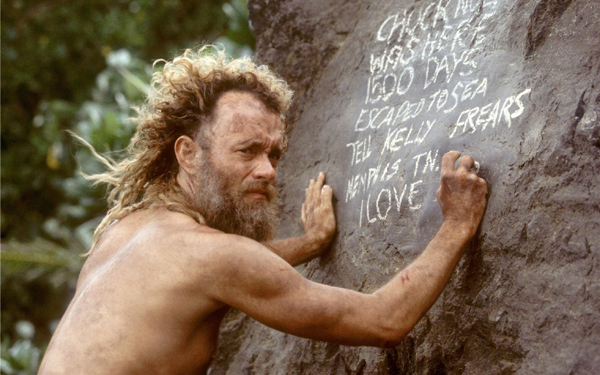 Cast Away for Real: Taking Research to the Extreme

“You have to ground things in an honestly felt experience of your own. Sometimes that is an experience you’ve had yourself; other times you have to talk to people and try to get into their heads and try to experience what they did.” Bill Broyles Jr.

In this exclusive interview with Creative Screenwriting, writer Bill Broyles Jr. talks about the creative process behind such films as Cast Away, Apollo 13 and China Beach, and also reveals the secrets of his own writing techniques.

Tom Hanks as Chuck Noland in Cast Away

In 1999 Broyles called upon Mormon survivalists in Utah to deliver him to an isolated island in Mexico and to teach him how to make fire; then they left him there alone for ten days without food, tools, or shelter. “I had to learn to make a spear out of rock and I had to spear a fish – or a stingray actually and eat it raw. I had to lick water off of leaves. Everything he (Noland) does in the movie, I did.”

Alone, Broyles discovered his own metaphysical need for companionship. “I went down to the beach the next morning and there was a volleyball washed up on the shore. It was a Wilson. I put some shells and seaweed on it and talked to it. That became like the core of the movie.”

Broyles called upon his five senses — and then some — to tell his Cast Away story without voiceovers or a musical score. “What was so powerful was just the sound of the ocean and the silence. I didn’t want the audience to experience anything but what the character did.”

He also recalled the isolation he felt when as a first lieutenant in the US Marine Corps returning to the United States in 1971 after earning the Bronze Star and the Vietnam Cross of Gallantry in Vietnam. “I realized that all of the things that were important to me back in the civilized world meant nothing to me anymore.”

Wilson in Cast Away

In Cast Away, as in all of his films, Broyles used symbolism. “There is the feeling that the ocean represents both birth and death. It’s not human; it’s this other being. It’s kind of a mystical whale. That is all kind of biblical in a way.”

Broyles called Cast Away his favorite film because the character shows what he thinks by doing. “A lot of it is beneath kind of rational thought – there’s just this kind of instinct. “Everything he does, everything he handles – every piece of wardrobe is in the script.”

An everyday object such as a Port-a-Potty became a vehicle, while a FedEx box represented a spiritual totem. “The thing that ultimately saves him is the painting (image) on the FedEx box that he doesn’t open. That one box that he does not open gives him the image of the wings and he realizes that’s how he is going to get out – on the wings of this Port-a-Potty. I just really enjoyed the visual storytelling of that.”

Broyles stripped away the most elementary of his writer’s tools – words – to create a character – the Wilson volleyball – that he called “my favorite character…Because he is made out of the blood of Tom Hank’s character. In a way, it’s a creation story.”

Broyles said he inevitably experiences a sense of loss every time he watches Tom Hanks character release Wilson to the ocean.

Broyles’ initial research for Apollo 13 began as a youngster growing up in Baytown, Texas. Later as journalist he wrote about the programs designed by the National Aeronautics and Space Administration. “One of my favorite scenes from Apollo 13 was when the crew is trying to make the filter and the guy dumps everything. He says ‘You have to take this and make that.’ I think there’s a kind of fascination with tapping into that primal thing we have. This survival instinct and our ability to improvise and to learn – that’s really fundamental.”

Like the character in Cast Away, the main characters in Apollo 13 get into trouble, they figure out a way to survive, then return home. “I like a structure that’s simple like that because you can tell the character’s story more deeply.”

Broyles channeled both real life astronaut Jim Lovell in Apollo 13 much as he did his fictional character, Chuck Noland, in Cast Away. “There’s always a part of me in every character. You have to really try to inhabit each one.”

During filming for the television show, China Beach, actors helped to develop the characters that Broyles imagined. “Just watching these actors, we used to say ‘they think they’re Marines, but they’re really not.’  They become them, convincingly so.”

Broyles did more than write China Beach as a multi-dimensional view of the Vietnam War to a television audience. “Something film and TV can do, besides just entertain, is they can be a way to express and confront those deeper things in life. You want it to make people’s lives better and deeper if you can, as opposed to just entertain them.”

Broyles learned to improvise scripts and to use all of his resources in order to save money. For the episode of “Vets,” he intercut recorded interviews with real veterans talking about their wartime experiences as anecdotes into previously recorded scenes from China Beach.

Broyles said he interviews and records real people talking about real life events and he also reads a great deal of research before he ever begins to write. “Often when I start writing, I don’t even look at it (the research). I put it all aside and just try to feel it. It’s kind of one of those parasite-host situations. If I let the parasite in too much it changes the behavior. So, I am inspired by it – I can’t do the writing without the research. I can’t really write until I’ve done enough research to write.”

Broyles’ attention to detail stems from his formal education at Rice where he earned a bachelors of arts degree in history and from Oxford University where he earned his masters degree in politics. He also understands the importance of historical accuracy from working a decade as an editor at Texas Monthly and two years for Newsweek. Yet, he admits that he still encounters pitfalls while writing.

“The biggest pitfalls I encounter in writing comes when my writing sucks, or I feel that it does. So you have to be able to write things that you know aren’t that good. Then that crappy screenplay is like scaffolding. I build it so that I can see to the next place and then I write the next one.”

During the writing process Broyles often subconsciously includes details that ultimately prove valuable to the success of a script. “Like those wings in Cast Away on the box. I had no idea why I put those wings there. But when I was trying to figure out how he (Noland) would get off the island, I put in all these different versions – he was rescued by pirates, or by drug dealers. Then I realized he had to get off by himself and he had the wings on the box.”

However, Broyles said he has become his own worst critic. “I’m rarely satisfied with my work. I’m not motivated by praise ‘this is so great.’ I’m motivated by ‘this sucks; you could do so much better.’ That keeps me going, but because of that I keep getting new ideas. It doesn’t stop.”

Writing the China Beach television series exercised his talents in a way that helped him to improve his writing process in a non-linear way. “I was always able to write the future episode even though we were in pre-production on one and filming another and in post-production on another. So instead of going ‘A, B, C, D, E, F, G,’ you say ‘Wait, I can go A, G, and the audience will know exactly what’s so going on.’ So I can cut all that other stuff out.”

Broyles moved from Jackson Hole, Wyoming to Santa Fe, New Mexico recently. He enjoys isolating himself in order to write. “I like to live away from the business of film. I just want to think about doing my job, which is the writing and then if I need to go to LA, or New York or London to get it made, then OK, I love doing that.”

However, Broyles prefers writing film scripts to those for television because he enjoys sitting and watching audiences react to his movies. “The religious celebration around the fire, telling stories or celebrating rituals in the dark — whatever those things are, I miss that with TV. I just feel so lucky that I’ve got to make a few movies.”