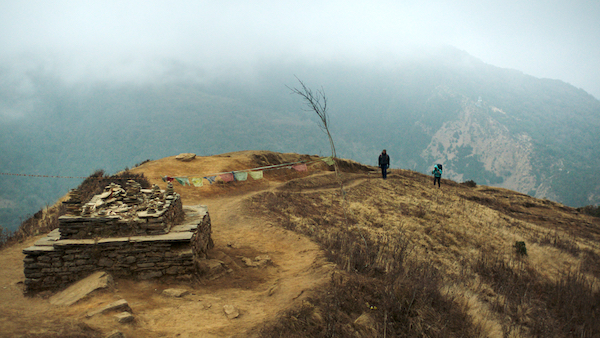 Cheung-Lau, a New York-based filmmaker who grew up in Ontario, California and studied film and history at Columbia, has spent most of his career as a gaffer (chief lighting technician), working on critically acclaimed films such as A Girl Walks Home Alone at Night and Patti Cake$. His new film, set in Nepal, is a meditative exploration of an encounter between two travelers, Tukten, a Nepali man heading for a new life in Dubai, and Hannah, an older Australian woman.

How did you come into focus on lighting?

The end goal was always to direct. I just wanted to make films and work on films. It’s always been something that I loved and wanted to be a part of.

When I first graduated from college, I sort of stumbled around for a bit. I wanted to work in every department because I felt that, as a director, that would be helpful to me. The last thing I interned in happened to be lighting, and that happened to be the first paid job I got.

I have memories of sitting outside and seeing the way that light moves across people’s faces. I was always attracted to lighting so it made sense that I ended up in that department.

When you first traveled to Nepal eight years ago, did you know you wanted to do a film there?

I did not. It was during my second trip when I found myself called back to Nepal less than a year after my initial trip, that I began to develop the idea of making a film there. It was so strange to be pulled back to a place I did not have a concrete connection to, and I felt like I had to express that feeling in some way, and film is the way I like to express things.

When you say, “pulled back,” what does that feel like?

It’s like being in love. Or being homesick. It’s very strange to be homesick for a place that I’d only traveled to once, where I’d spent six weeks of my life. It was really interesting to me that this place that I have no logical connection to would have that strong a connection to me. It felt like it was an important emotion to explore.

Can you identify a specific thing that called you back?

I don’t think there is a specific thing, though the people there are incredibly generous and inviting.

Before that, I’d been to Europe once or twice, and I’ve been conned. I landed in Nepal and people would come up and talk to me.  I was immediately on guard, watching my things and very conscious of everything that was happening. These people would talk to me for about 20 minutes and then say, “OK, welcome to Nepal. We’re really happy you’re here. Nice to meet you.”

They just genuinely wanted to know about me and why I wanted to visit their country. That was such an interesting approach for me and gave me a lot of faith in humanity.

So I think the people are definitely one thing, but the mountains are obviously something that I’m very close to that means a lot to me.

When did the start of the story of The Mountains Are a Dream That Call to Me come to you?

I understand that the original version of the screenplay was just visual – 43 images. So you knew what it looked like. But did you know the story you were telling with those images?

The images were all landscape shots.  This is a personal thing. When I stare at a painting of a landscape, I can stare at it for hours and to me there’s a story there.

I had taken all these photos over the course of several trips. They were out of order in that they didn’t follow the path of the characters or the path of the mountains.

In the same way that editing works in film, the juxtaposition of those images, and moving from one to the other, gave me a strong feeling and understanding of the movie. In many ways, the beginning of the film is more about the story of the feeling and the course of that emotion.

It’s a hard thing to talk about in a way because we’re so accustomed to defining story in a specific way – particularly in western culture. When I took film courses in college it was all about the three-act structure. And I’ve never necessarily subscribed to that belief.

But at some point, you had to turn the images into words.

Had you written screenplays since you’d been in film school?

No, I hadn’t. It’s a testament to my luck that I was able to find my producer, Alexandra Byer, who was able to look at those 43 images and know that there was something there. But being a more practical person — and a producer — she said, “You have to write something.”

So I did the best I could to turn the emotions and the feelings that I had into words.

What was the process of getting the film financed? Was the screenplay one of the things you and the producer needed to have in hand?

How did that work? Obviously, this is not Avengers 12. This is a very poetic, very meditative film. Who finances things like that?

It’s hard. We’re all artists.  We’re all creative. We do what we can, and what we want, and what we need to make. There are souls out there who know that art can heal and can solve problems in a way and are willing to donate to that.

Our friend Caspar Newbolt, who designed the poster for the film, took the 43 images we had and created a sort of look-book. That was integral to our process of financing.

How long was the shoot?

There’s a ghost-like figure in the film. What does that represent?

Someone at the premiere asked the same question.

The film took about eight years to develop. Over the course of this time, the film has evolved in its meaning to me, as we all evolve. As we grow, different things mean different things. To me, it’s meant a lot of things.

You want the viewer to figure out what that figure is? Rather than imposing an interpretation?

That’s one way of putting it. To me, things rarely ever mean one thing.

I guess the closest I can get to it is abstract painting – or even poetry.

Things mean different things to everybody because we come from such a variety of backgrounds and a range of experiences that at the particular time and moment that we’re witnessing a piece of art it’s going to mean something different to us.

As we all know, when we return as adults to a piece of work that we really enjoyed as a child it means something else entirely. Or it might not work at all. But we remember what the feeling was.

That’s what art does: it evolves over time as we evolve.

I’m not forcing people to figure it out. It’s not so much about “figuring it out” as trusting what we feel and our emotions.

So often — at least in the education system that I grew up in – we were taught that things “mean” very specific things. I remember in my English class I was analyzing a piece of literature and saying, “This is what I think it means.” And the teacher said, “No it doesn’t mean that. It means this.”

And I think that’s a very flawed approach to art because we don’t know. And the author never knows. Because it’s always a dialogue with the audience. We can’t say what any one thing means. As we know, language is complicated. It evolves.

The Mountains Are A Dream That Call To Me – Tukten Mountain

What was the most important thing you learned in the process of making your own film as a director that you hadn’t learned in working on other sets?

I definitely learned a lot. You can’t really learn about directing until you direct.

I’ve watched so many wonderful directors over the years create these amazing films. I’ve been inspired by them, and I’ve spoken with them, and I learned what I could from watching them.

But we’re not privy to the inner workings of their brains or all the interactions they have with their actors and other creatives.

Until you’re sitting in the chair and figuring out the film for yourself you don’t know.

I learned a lot about what my process would be. In the editing room, I’ve been watching myself and thinking about how I could have blocked something better or made something easier so it would work better.

Once the film was done, what’s the process for getting it to Sundance?

You send it off, cross your fingers, and hope for the best.

There’s a very small application fee and there are DVDs and links you can send. Obviously, it’s very competitive. This year, 118 features were selected out of 3,853 submissions.

Did you think you had a shot?

I think every filmmaker will tell you that they think they don’t have a shot. But deep inside there’s an inkling, there’s a hope. We’re optimistic people.

How does Sundance let you know you made it?

I got a call when I was at work, but I missed it and thought it was spam. Then I got a call from my producer. So I called them back and they let me know.

How does that feel? It’s your first feature and you made it to Sundance!

I was standing on Park Ave in New York City and the moment I heard the words, “We’d like you to invite you to Sundance.” I didn’t quite hear anything else because I think I blacked out a little. And I screamed a few times.

Did people look at you funny?

They definitely did. But in New York, you get that a lot.

What has the response to the film been like at Sundance?

Watching it with this larger audience for the first time I was very tense and nervous. At the end of the film I went up to do the Q&A and the majority of the theater was still there and that was exhilarating. And then after that, a number of people came up to speak with me and to talk about their experience of the film and what they felt and how it made them feel – the different ways that they interpreted things. It was exactly what I wanted. And that’s an incredible thing.

How does it make people feel?

A lot of people have mentioned feeling contemplative about their lives and where they are and what they’ve done and it’s a really interesting discussion.

What’s next for you? What do you have in the works?

There are a number of different ideas I’ve been working out over the years. I don’t know which one’s definitely going to come next.

But right now I’m just enjoying this. I don’t think the end of the life of the film is here yet. I think there’s a lot more for me to connect with people and talk about this film. That’s part of the journey of the film. In some ways, I’m living in that and enjoying that and possibly using that to propel my next film as well. 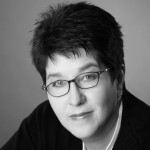