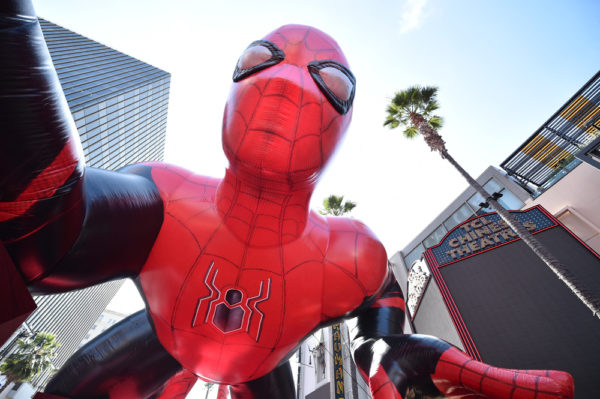 Hot on the heels of Avengers Endgame earlier this year, the next installment of the Spiderman juggernaut has hit our summer screens to much delight. Curiously, Spider-Man: Far From Home was not a sequel to Spider-Man: Homecoming (2017), but rather a continuation of Avengers Endgame. This speaks to the cross-pollination and inter-connectedness of the characters in the Marvel Cinematic Universe (MCU) films. Each new Spider-Man movie is both a sequel and part of the MCU matrix.

Spider-man is “Far From Home” trying to take a well-earned high school vacation in Europe to recalibrate after the devastating losses in Avengers Endgame. Peter Parker is still mourning the loss of his mentor Iron Man and wants nothing more than to be a normal teenager. But he has great power and it’s time for him to step up. And with great power comes the great responsibility of accepting his destiny by fighting evil for the good of humanity. In this movie, it’s the Elemental Creatures.

It is fair to say that screenwriters Chris McKenna and Erik Sommers who also worked together on Ant-Man And The Wasp have become part of the Marvel DNA. They spoke with Creative Screenwriting Magazine about their writing process and how they tackled penning Spider-Man: Far From Home.

“All the Marvel movies are part of an ongoing saga. The characters are reacting to the movies before them,” said McKenna. “Spider-Man: Homecoming was about Peter Parker reacting to his journey after Captain America: Civil War and this movie [Spider-Man: Far From Home] takes place a few months after Avengers: Endgame. It deals with its repercussions.”

The screenwriting duo was asked about the significance of European locales in their film. “Spider-Man was always seen in New York. Having him swinging off iconic European landmarks was a strategic move,” added McKenna. “The idea of taking Spider-man out of Queens had a lot of traction early on to differentiate this film from the other movies both thematically and visually,” said Sommers.

Forcing Spider-Man out of the comfort of his neighborhood was essential in testing his resolve and grit as a superhero.

“Thematically, this movie is the inverse of Spider-man: Homecoming. Peter Parker is running away from New York,” said McKenna. “In the previous film, you literally had the Homecoming dance and in this film, Peter is taking a trip ‘far from home'” said Sommers. The theme of ‘home’ holds special significance to Peter Parker. “In Spider-Man Homecoming he was finding himself and coming into his own. He was working out his place in the world,” said McKenna. “A lot of the ground he made in New York was crumbling under his feet. In ‘Far From Home’, he’s not sure where he is. He’s adrift.” Through this chaos, a new order is formed for Spider-Man.

Peter Parker’s internal emotional struggle was wanting to remain a child, but instead, he is being pulled into his superhero destiny. Supervillains like Nick Fury were essential in forcing Spider-Man to remain a superhero.

The screenwriters ensured they captured Parker’s inevitability of maturity in their screenplay. Spidey was also coming to terms with his grief, so the death of Iron Man couldn’t have been in vain. His mentor taught his mentee well.

Chris McKenna and Erik Sommers began their serious screenwriting careers on popular comedy TV shows such as Community and American Dad. This may not have seemed like the obvious introduction to the Marvel Universe, but it did provide them with invaluable experience. Both McKenna and Sommers’ experience on Community gave him space to work his character ensemble writing muscles. This is where they met.

Since Chris and Erik were familiar with the established comedic style and tone of the Spider-man films, they adjusted their TV writing style to fit into it.

“In both Community and American Dad, we blended comedy with genre. American Dad had science fiction elements, and Community sometimes had a different genre in each episode,” stated Sommers. “Having the opportunity to use these writing techniques in a superhero movie felt like a natural progression to us.”

After extensive meetings with Jon Watts (director) to discuss the voice and tone of Spider-Man, they started writing. “Anytime you start a new project there’s always an adjustment period where you need to get a feel for what the person is going for,” said Erik.

The early story meetings were based on a bible that Marvel produces which clearly defines the world and the characters that inhabit them.

“They [Marvel] have ideas about what the film could be thematically and visually. They explore character, places, a new spin on the source material that could be mined, or things that could be addressed from previous films,” continued Erik. “Before you know it, these ideas become a detailed story over time. Eventually, the time comes to outline.”

Chris and Erik were given two mandates before writing the first draft. “One was to make a fun movie, with a lot of fun and games. The second was to address the dark repercussions from the first movie,” said McKenna. “We also had to work out the best way to write these iconic characters. How do we introduce a great villain like Mysterio?”

Sommers sees the film development process as similar to working in TV. “It’s a very collaborative environment. The staff writers work together with the goal of achieving the vision of the showrunner. You work to make each episode as cohesive as possible so that it has the same tone and vibe as the rest of the episodes. In a  lot of ways, the MCU works in a similar way.” It boils down to the screenwriters servicing the director’s vision. “We have a good sense of what Marvel is going for and they have a good sense of what we’re about.”

That said, McKenna and Sommers still had to originate ideas and suggestions on how to execute them. “We pitched plenty of ideas on the fly. Some were accepted. Some weren’t. The team might suggest ‘it should be a little more this or that’. We made a million adjustments and micro-adjustments until we came up with something the whole team was excited about,” remarked Sommers.

“We got inspired by a personal hook to find our way into the story,” said McKenna. “We were given a sandbox so we can write whatever we want as long as it entertains them. Have fun. Many production companies operate from fear, but not Marvel. We have built a level of trust with Marvel to allow us to write a great movie.”

Working on blockbuster movies isn’t always smooth sailing. “A negative aspect of the job is not fully understanding what is required of you.  It’s hard to write toward something if you don’t know what they want,” said Sommers.

McKenna and Sommers offered their advice to aspiring screenwriters. “At the end of the day, it’s all about writing and rewriting. The more you write, the better you get. We came from the world of television where every story idea gets ground down until it eventually becomes good. If something’s not working, come up with a new idea,” quipped McKenna.

“There are so many aspects of screenwriting we can’t control, but we can control how hard we work,” mused Sommers. “You have to do the work and manage your time effectively so you have time to write. Keep grinding away and your time will come.”