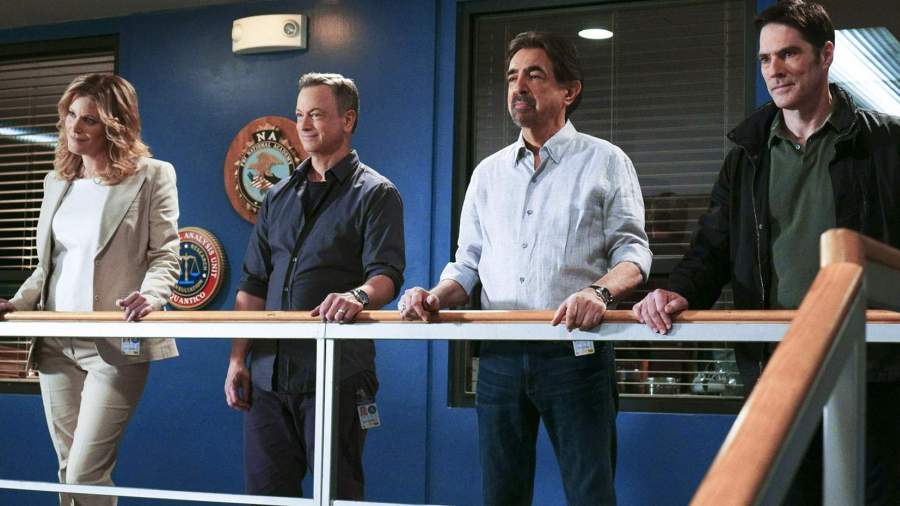 Film and TV writers come from all walks of life. It defines their writing style and voice. TV writer Christopher Barbour has an intriguing background. His father, an illegal immigrant from north of the border, and his mother, a child of legal immigrants from south of the border, had a son who wanted to become Tiger Woods. Although Barbour’s dreams of golfing stardom never materialized, he took a sharp turn and began adapting the timeless classic The Lion, The Witch & The Wardrobe. Keeping up so far?

Then, Chris landed a gig on Crossing Jordan on NBC TV to dip his toe in the world of television. After that, he started plotting murders. Call 911. He only plotted murders on highly successful TV shows like CSI: Crime Scene Investigation and Criminal Minds: Beyond Borders. Cancel the 911 call.

Barbour is still proudly plotting murders and other heinous crimes on the 15th season of Criminal Minds. He shared his insights on his TV writing career with Creative Screenwriting Magazine.

Why did you choose to write TV procedurals above other writing forms?

Professionally speaking, and, well, to be quite honest with you, I didn’t exactly “choose” police procedurals as the genre of TV drama that I would make a living at. It could almost be said that it chose me. Not to say that I didn’t grow up loving a good murder mystery – from Agatha Christie to Raymond Chandler, or, you know, an intriguing psychological thriller from Rear Window to The Silence of the Lambs– but, truthfully, I just always wanted to make up stories for the small screen. For TV. And so, I would’ve probably adapted every single one of my personal preferences in order to get whatever kind of a job might’ve become available as I struggled at the start of my career.

However, it just so happens that my “big break” would come on a network TV series [Crossing Jordan] that allowed me to indulge wholeheartedly in a very popular variation of my preferred dramatic genre. And ever since, I have continued to be fortunate enough to write a whole bunch of little, one-hour murder mysteries.

I do see my work as “mystery writing” rather than simply putting together the pieces of a “procedural.” I’m not trying to reject the term, it’s just that, during my process, my main concern is drawing viewers into an entertaining web of intrigue that allows them to enjoy playing along at home with all the whodunit possibilities.

How do the TV writers’ rooms you’ve worked in function?

Well, I would venture to say that every TV writers’ room is different. From my own experience, the process usually begins with an individual writer pitching a story idea to the assembled group. It is, generally, a very broad concept for the episode. Perhaps it is the nature of the crime or the type of perpetrator involved. It might be a vision of how the episode will begin. Or it could be how the episode might come to its spectacular conclusion. In the case of let’s say CSI, it might be a new forensic technique that seems fascinating to explore.

Following that, the writer will use the input from the other writers to structure the overall story – coming up with scenes we’d all like to see in the episode. You know, coming up with “story beats.” And then, the whole room would start trying to line up those beats in order. Often aligning them with specific personal moments for the show’s principal characters. And always attempting to be ever mindful of the four or five act structure. Since, of course, I work in the realm of commercial television, it is essential to “write to the act break,” meaning you need to give the audience a really fantastic reason to come back after the commercial break. And this entire process “in the room” may take a week or two weeks.

Finally, the completed story is pitched to the showrunner, who will offer input before setting the writer off to write the outline.

How does the TV episode outlining process work?

The overall structure of an episode’s story is usually hammered out “in the room.” The outlining process itself is much more about putting “meat on the bone.” Once a writer goes home to write the outline, that writer is trying to figure out all those terribly devilish details. What might be said by the characters. Or how an action sequence will actually unfold.

But, I guess, if we were to back up here in my explanation… the way we usually structure an episode is fundamentally about the act breaks. As I said, in my world, that is the four or five act structure for commercial television.

This means you only need six solid story beats, let’s call them “developments,” to complete an act. And each beat is about one of our protagonists facing and then finding a way to overcome a specific obstacle. You know, every episode has a different rhythm, so there can be variations, but, more often than not, it’s always important to remember, in the murder mystery world, that you better have a damn good reason to be making any kind of personal digressions, if your primary dramatic engine is rolling along on solving somebody’s murder.

How rigid are procedural stories compared to other TV dramas?

I think every TV series has its own particular dramatic grammar, which allows it to be recognizable to its particular audience. So, once you figure out those “rules,” I think it can be quite helpful to the creative process. Obviously, murder mysteries tend to have a much more obvious story structure – a person is killed and the show’s heroes are driven to achieve some form of justice.

So, your show will start with the crime and then end with the apprehension of the evildoer. Those are the proverbial “goal posts.” But, every good episode of television will present a specific problem in its “A” story for the protagonist to “solve” by the end of the hour. And so, the steps to solving that problem, or even a misstep that makes that problem worse, are the steps or story beats that will take us to a conclusion.

How much individual flair can you infuse into your scripts?

It might be harder to see in a “procedural” crime drama, but TV writers can easily put their stamp on an episode. Usually, it manifests itself in the essential “world” being explored. Meaning the murder might take place at a fancy restaurant because the screenwriter wants to illustrate the quirky politics of running a high-end eatery. Or we might have a murder at a boxing match because the writer wants to show you the current state of professional boxing. Another way that a writer can put an individual stamp on an episode is in how the guest characters are rendered. Particularly in how they express themselves.

Describe your unique background and how it informs your TV writing?

I studied English and creative writing at Stanford University. And when I graduated, I moved to New York and started attending the American Academy of Dramatic Arts because I thought I wanted to be an actor. But I was definitely not cut out to be an actor. Especially a professional actor, who must endure the slings and arrows of outrageous fortune in order to try to make a decent living. I have so much respect for how an actor courageously faces the challenges of auditioning for jobs. It was all too much for me.

But I was not afraid to have people read and critique or, at least, try constructively to critique my prose. But, at the end of the day, I think what makes me uniquely qualified for TV writing is my appreciation for working within specific perimeters – time and money. What trips up most aspiring writers who want to be professional writers is that they cannot accept that what they have imagined might be judged to be utterly “unproduceable.” Either because it will just cost way too much money to shoot. Or that it would just take way too much time to shoot.
I think of writing for TV as something akin to an episode of Project Runway in which you have only so many materials and so much time to design and make a decent ensemble.

How much research do you do for each episode?

I do a lot of research. From reading about old criminal cases to emergency medical procedures. Because it’s important to me to feel confident about the technical aspects of the police work. But I also want to know where I might need to take dramatic license. Because, as I was taught a long time ago, you should never let “reality” get in the way of telling a good story.

What inspires you to write iconic shows like Criminal Minds and CSI?

I’ve always enjoyed the idea of taking an audience on a journey. And in the cases of CSI and Criminal Minds. I like the fun to be had in manipulating an audience’s fears. Because I believe there’s a nice bit of emotional catharsis to be had in confronting what truly terrifies us. I suppose it’s the reason why we enjoy taking a ride on a crazy rollercoaster.

Do you have a personal favorite show you’ve written on?

Oh, my… you’re asking me to choose from among my children. And I don’t even have children! But, honestly, the last two seasons on Criminal Minds have been pretty incredible. Our group of  TV writers is so in sync with one another, and our sensational cast and amazing crew work just so well together. It has been quite a privilege for me to have hitched a ride with them for a while.

What skills does it take to become a successful TV writer in today’s landscape?

That is a hard question to answer. Because I know a lot of truly talented writers who are unemployed, and that I suspect may never get a job in “the business.” So, while it certainly does take a strong work ethic and persistence and ingenuity and a thick skin and a whole bunch of other stuff… at the end of the day, it might just come down to being… well… being damn lucky.

And then, once you are lucky enough to get a job on a TV show, the next part is being highly adaptable creatively. And that’s where I have seen too many paid TV writers flare out quickly. They cannot adapt to the ever-changing perimeters of the job – the constantly shifting sands of tightening budgets or satisfying actors’ schedules or narrowing production schedules or just about everything that is actively trying to compromise that “original vision” for your painstakingly conceived script. Because, essentially, you have to know how to “roll with it.”

Do you have a personal philosophy on life?

Do I? Oh, I don’t know. But I suppose I do feel as if we’re all kind of… stranded… on this little life raft… in the middle of the ocean somewhere… in the dead of night… and we’re taking on water… and if we don’t start working together, we’re all going to die. Which is another way of saying, I think we should work as hard as we can every single day to find ways to be kinder to each other and, you know, to help each other out a little bit.