By now you must be seeing some obvious techniques here. Tropes must be subverted to not become clichés and character types must not be reduced to clichés to remain archetypal and stay above the ordinary.

In Casino Royale, the 2006 Bond reboot, the writers/producers saw an opportunity to tweak some of the familiar Bondisms to match the no-nonsense Bond they wanted in Daniel Craig.

At a high stakes poker game, Bond is angry because he’s losing at cards. He goes to the bar to fume:

BOND
Do I look like I give a damn?

M is now a woman, the remarkable Dame Judith Dench. There’s no Q and when he does appear in Skyfall, the third Daniel Craig Bond film, he doesn’t have a trove of amazing weaponry. Q gives him a Walther PPK (always Bond’s carry gun of choice) gun and radio transmitter and that’s it. “Were you expecting an exploding pen? We don’t go in for that anymore,” is what Q says. It’s a much more raw form of Bond all around and it’s worked wonderfully.

In the fun, at times brilliant Enchanted, the Prince is handsome and capable – but a bit of a dunderhead who attacks a NYC bus thinking it’s a dragon, jumps off a stone bridge onto a roadway to sing his welcome to Giselle (Amy Adams) and instead gets flattened by a peloton of bikes. Then there’s the cynical romantic lead (Patrick Dempsey) who is convinced that love doesn’t exist at all.

In fact, the entire movie subverts the Disney trope library. Giselle calls all the woodland creatures by song but in NYC she gets pigeons, rats, and cockroaches instead of cute, furry critters. Wonderful outside-the-box thinking. It took Disney almost a decade to greenlight the film and to their credit they finally decided that yes, audiences would enjoy a bit of gentle fun at their expense.
Scream likewise took on many horror film tropes, subverted them, embraced them back into the story, and had us both laughing and gasping in quick succession. This disarming of our expectations using comedic flips of the horror film tropes had a really neat side effect of making the sudden violence even more impactful. We figured a character was safe if they said “I’ll be right back” because this was one of the tropes they subverted on a meta level. Don’t ever say “I’ll be right back” in a horror film because you won’t be, the discussion went; and then one of the character does say that. So the writer wouldn’t now dare kill the dude now – yikes. He did.

Galaxy Quest uses every space opera trope in the universe (pun intended) to deliver an hilarious look at those who love Star Trek and Star Wars and attend the conventions. BTW, congrats to Captain Kirk for his recent triumphant return from space. Thankfully, no one on the Blue Origin crew wore a red jersey. Whew!

Even commercials do this clever subverting of tropes. A really funny one is the Geico spot where fleeing teens are trying to decide where to hide from the slasher and they avoid all the common mistakes fleeing teens make in these situations only to hide in the barn with all the hanging chain saws where the killer just looks at them with resigned puzzlement.

When I wrote for Syfy Channel they insisted that their creature features reveal the monster in the opening instead of keeping it hidden. That was an interesting and challenging subversion of a genre staple in which we would normally keep the monster hidden for the major part of the film until the horrifying reveal.

This flipping allows your work to rise above the cliché.

A trope can become a cliche overnight. It’s because inexperienced writers tend to write about stuff not that they’ve experienced, but what they ’ve seen on TV or in the movies. In today ’s digital world it’s not as prevalent but back in the day making a duplicate of something diminished it. That’s still what happens when a writer just copies.

The Wire is an amazing series because the ultra-talented David Simon worked a Baltimore news desk for years. Bosch is a certified hit partially due to Michael Connelly working as a crime reporter from 1980 to the mid-90s in several cities including Los Angeles. These TV series have a stunning sense of veracity because of their creators’ backgrounds. 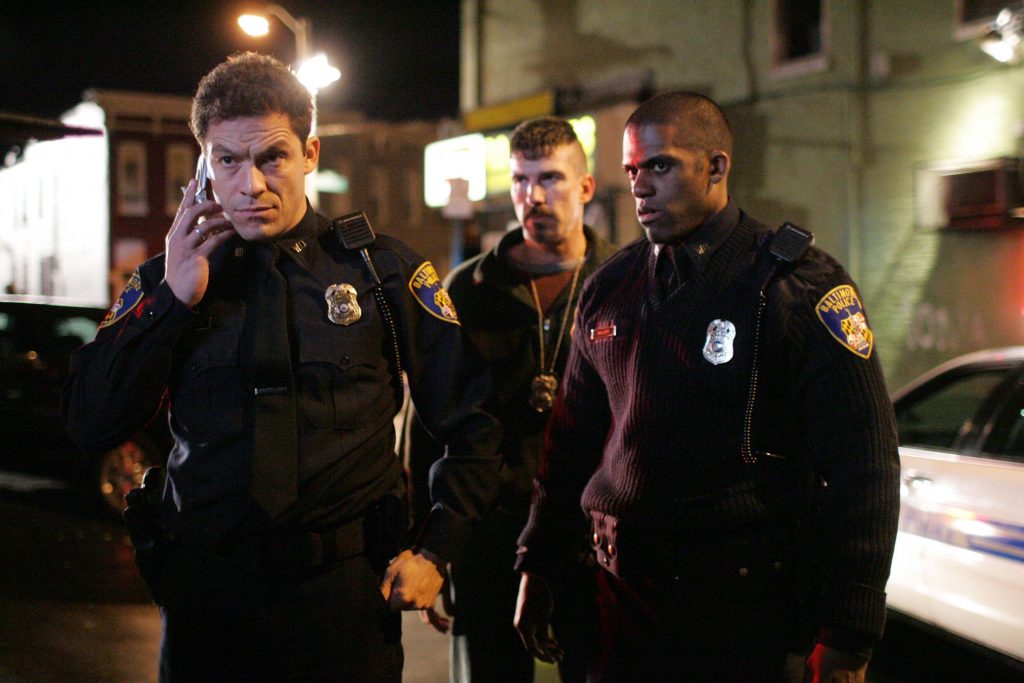 Partial cast of The Wire

Sons of Anarchy feels totally right in the storylines. Kurt Sutter spent months embedded in a NoCal biker gang learning how they lived, how they talked, how they loved and fought. Any scenes he then wrote smacked of strong truths in this powerful world of biker gangs that he reflected in fiction. I recall one scene where SAMCRO members blow-torched the ink of a former member’s back. It was horrifying and I’ve never seen that moment anywhere else before or since. I trusted that that’s the way it’s done if you decide to betray an MC. The rules are clear and brutally enforced and different in many ways to what I knew.

So, maybe we can’t do what some of these writers have done. But there are ways to improve your work even just sitting at your desk.

I enjoy doing research and exploring the era, characters, history of the time. If I’m writing about anything I’m also reading about that subject even as I’m writing the script. I pack my subconscious with everything I can fit in there.

When I was writing about a particular gangster, I read everything I could on him. I even went to the L.A. Library (a most impressive place) to read the actual police reports from the archives of that era. I couldn’t check them out (non-loanable) but they were available to read at the library. My resulting script was mostly fictional but it was infused with many truths from that era that I believe elevated the work.

I studied Cockney rhyming slang for a minor character in one script to bring a different slant to that character and read everything I could about British commandos for another project.

When I wrote Devil’s Knot I spent months talking to an attorney on the case, reading court records, watching documentaries, poring over anything I could to get a sense of what had happened. It was a terrible, terrible event and then a horrible miscarriage of justice, and I had to understand it even years removed. The script that was ultimately filmed had only the broad strokes of my work in it but I was proud of my original story because whatever decisions I made were based in a deep understanding of the case.

I followed an old saying that I modified for my purposes: “Write truthfully in imaginary circumstances” by learning all the truth I could and translating that to a story that I could tell.

As mentioned about copying something then attenuating it, I identified that my students many times are writing movies about movies, not life. They ’ve seen some of these stereotypical scenes so many times that they’ve embraced them as real.

A successful filmmaker (multiple Oscar nominee and winner) once said that if all you do is watch movies (or TV) your writing will never rise above the mundane. I saw this first hand in a student’s recent work.

It was very well-written but… somewhat derivative. Everything read like something we’d all seen before in many movies. A simple change helped. All the student had to do was consider his character who was not typical for this sort of action scene and then craft the scenes so he used the character’s differences in the action. In other words, explore what’s unique.

For example, from a scene standpoint, women’s bathrooms are different than men’s – what in there could have helped elevate my student’s work, made it less cliché? An action set piece in a woman’s bathroom would be eminently explorable. Had my student just thought through their character’s uniqueness the action scenes that seemed familiar would have been fresh and unique.
Deliver on the tropes, but wiggle them so they feel different.

Make It Your Own

Attack The Block is one of the most incredible sci-fi horror films I’ve seen; there’s not one thing in that movie that is a cliché. Joe Cornish took the “alien invasion” trope/clichés and created something entirely new and vibrant. I could write pages on just that movie. Genius work.

Underworld took vampires and lycans (werewolves) and created an entirely different mythology for those familiar, some would say cliche, horror standards. I was blown away by the re-imagining of all those archetypes.

Many reboots change the way the characters are either introduced or interact. Spenser Confidential re-envisioned Robert B. Parker’s iconic character as an ex- cop who was sent to prison for five years after beating up his captain. In the Hawaii 5-0 reboot, Steve McGarrett is now a USNR former special forces Lt. Commander and Kona, originally a burly male actor (Gilbert Lani Kauhi) became actress Grace Park.

Characters, situations, genres, moments – all can be adjusted to make your work so much more dynamic. Don’t settle for the cliché which means don’t write the first things that come to mind. Work on it a little and deliver on tropes not clichés and archetypes not stereotypes.