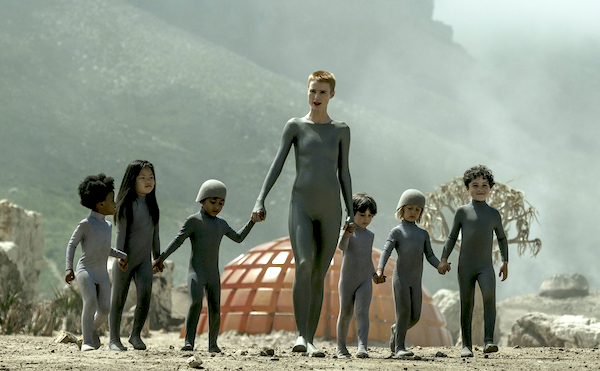 The role of android robots in human lives has been the stuff of many sci-fi films and TV shows. They range from the works of Philip K. Dick and George Lucas to James Cameron and Ridley Scott. Raised By Wolves, penned by Aaron Guzikowski (Prisoners, The Red Road), tells the story of two aptly-named androids, Mother (Amanda Collin) and Father (Abubakar Salim) who are tasked with re-igniting the human race by raising a brood of human children on Kepler 22-B, a virgin planet after Earth has been destroyed. We spoke with screenwriter Aaron Guzikowski about how being ‘raised by wolves’ affected him.

“I first came upon this idea based on my experience as a parent with three young sons. I’m thinking about the world, the encroachment of technology, and what the future holds for them,” he mused. The screenwriter was fascinated by the increasing interaction his sons have with technology. What will this evolve into as the two converge?

Raised By Wolves is not necessarily a cautionary tale of a dystopic future or one of human destruction. “A robot can be a parent or role model. It can be whatever you want it to be,” he added. Admittedly, Guzikowski did explore other possible expressions of this idea, including the battle of man versus machine. He settled on the idea of androids raising human children and how they influenced each other. “The more I thought about it, it was more about the children influencing the androids than the opposite.”

The androids are robots programmed to be caregivers. They serve no other role. Then they experience “impulses” (unprogrammed urges) as their internal behavioral algorithms are altered by increasing interaction with the children as they learn from them. “These impulses lead to real humans emotions. They experience both the good and dark side of those and learn how to process them.”

Guzikowski cites the example of death in the new colony. The androids experience an inexplicable, unprogrammed feeling they don’t know how to deal with. Humans readily identify with these feelings as sadness and grief. “Emotions can be good, but also extremely painful. The androids feel things that keep tripping them up.”

Their evolution in Raised By Wolves explores how these androids unravel the meaning behind these emotions as they restart humanity.  These emotions are not only toward the children, but also toward other androids. This transcends the traditional human parental bonds because the androids are not programmed to love each other. This is particularly evident as Mother and Father mimic human love through attempted flirting.

Aaron did not want a “Terminator-esque” android that may eventually turn on humans after initially protecting us. He wanted us to re-examine ourselves as both “Creators and Creations.”

Aaron Guzikowski confessed to conceiving the initial idea over a decade ago. “The process stimulated all kinds of science-fiction ideas and I had to find a way to bring them all together. It was a painful process of trial and error.” He relied on putting pressure in different places until he finally settled on the current story.

The screenwriter wrestled with his “parenting android” concept for some time before it was galvanized. Once he landed on the idea of all the children dying, except for one, Campion (Winta McGrath), the story really took off. Campion, the scruffy twelve-year-old boy with wisdom and logic far beyond his years, starts questioning his parents’ parenting abilities after being exposed to religion. “Not only is Campion on an alien planet, everything is new, [he was raised from an embryo] and he is questioning everything.”

Guzikowski also recalled a story by Ray Bradbury about a child raised in a house and led to believe that this was the scope of the entire world. The child has no idea that an external world exists. These references lend some insight into the title of his television series.

Aaron Guzikowski also references The Shining as he explained the horror of Campion knowing that his siblings died at the care of his android parents.

The original version of the story with all the five siblings being alive leaned more into a tale of pioneers colonizing a new planet. After finessing the pilot episode, the writer wrote the next one in a week.

The screenwriter relished the paradox of humans requiring non-humans to better understand themselves. The structure of humans is already pre-defined, many things are a given, whereas the structure of androids is not. It needs to be created from scratch.

As androids acquiesce into humanity, “You look at everything more critically.” The screenwriter examines the nature of Father’s awkward sense of humor with Mother. He asks, “What makes people laugh? Why are humans funny and androids not?”

Curiously, Aaron Guzikowski chose religion as the source of conflict between tribes, rather than a scarcity of resources. “Faith is something we have more control over. It is an artificial construct” While religion may be considered a choice, it is often a matter of survivalist tribalism than faith itself. The screenwriter believes there are strong parallels between faith and technology.

“As a civilization, we put a lot of faith in technology. At some point, this faith unveils a greater meaning and purpose of our lives. A place we all want to reach. Even if it’s an artificial construct, there is some value to it, because both faith can cause people to band together. It can also cause wars. It is so mysterious. It asks the big questions.”

On a deeper layer, androids may be considered a metaphor for god. “They are our gods and we are theirs. Ridley [Scott] said, ‘God is something that we can’t comprehend. God is a great power watching over us. This can manifest in a number of ways.”

Aaron Guzikowski references the influence of old mythological stories in Raised By Wolves. Consider the tale of how Rome was founded – twins Romulus and Remus raised by wolves.

“There is something ancient and primal about these stories. It’s about their simplicity to help us better understand humanity rather than to explore various belief systems. They are so ingrained in our psyche.” He also describes the “Adam and Eve” references in the final episode of the series titled, “A Lost Paradise.”

The screenwriter also professes his love of numbers in his television series – specifically the number five and how it relates to life on Earth and Kepler 22-B. For instance, the second episode was titled “Pentagram” and there were five human embryos transported to the new planet.

In an even more distant aerial view, Raised By Wolves can be seen as a metaphor for church and state. “Both are forms of organization and forms of oppression.”

The screenwriter is mindful to not reduce the thematics of the TV show into a good or bad dichotomy. He is more interested in exploring the points of intersection and agreement of opposing beliefs. “Old ideas need to be scrutinized. That’s how you come up with new ideas and make progress. Steadfast beliefs cause polarization and stagnation.”

Lofty philosophical concepts and deeper meanings aside, Guzikowski basically wanted to create a show about society’s basic structural unit, the family. “In a larger sense, the entire human species is one large family.”

Aaron Guzikowski continued that his screenwriting genre of choice was horror rather than science fiction. “My dad didn’t like horror so I wrote science fiction stories. I wanted to write something that he would like.  But I still had to inject the right amount of horror so I liked it.”

In conclusion, the screenwriter believes great stories come from your personal connection to the material, regardless of the genre. “The story must come from some electric place. It’s hard to artificially construct emotions even with our encyclopedic knowledge of them. The most important thing is mine the human aspect of the story.”

The life of a screenwriter is fraught with unknowns. “You have to accept that you’ll write things that won’t be brought to life. You’ll have a bunch of Frankensteins that never walked. You have to live with those corpses. Maybe you’ll get a chance to bring them to life, or come to terms with the fact that they should never be brought to life?”