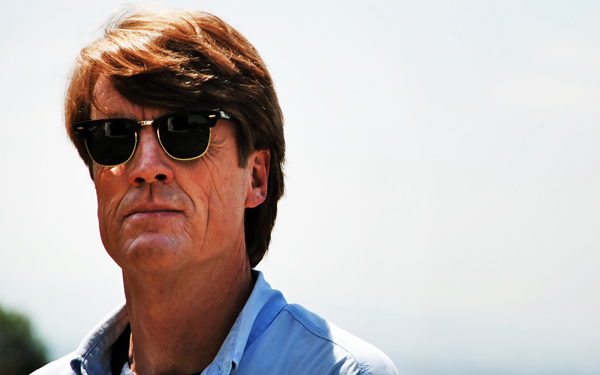 Screenwriter, novelist, showrunner, producer…In a career spanning over 30 years, Daniel Pyne has become known for his knack of creating works filled with suspense and twists.

He is also a busy man. He published his latest novel Catalina Eddy in March, he is the show runner for season three of Bosch which airs this weekend on Amazon, and his next film Backstabbing for Beginners will premiere in September at the Toronto International Film Festival.

Despite this, Pyne remained self-effacing as he spoke with Creative Screenwriting about writing plot twists, research, and updating novels for the screen.

How did a graduate from Stanford with a degree in economics become a screenwriter and a novelist?

My father is a painter and a sculptor. He didn’t want me to go into a creative field, so economics sounded to him like a really practical degree, although it really wasn’t. It was almost like philosophy of money. But what it did help me do is understand what I was getting into, and it’s helped me divorce the business of Hollywood from my art.

Name a couple of movies that inspired you.

I came of age in the ‘70s, so I was very influenced by The Godfather and The Conversation, by Apocalypse Now, M*A*S*H, and all the Robert Altman films. I also liked the French new wave stuff like Jean-Luc Godard and Jean Pierre Melville, and all those French directors from the ‘60s.

I was really interested in early French films by Jean Vigo – noir. What else inspired me? There were lot of films, foreign films – I mean Fellini was huge. I love Fellini.

You studied screenwriting at UCLA?

I took one film course at Stanford. My father would watch old movies on TV. I think I got a love for movies from him, but it wasn’t until I got to UCLA that I was really exposed to the critical studies of film, and film as an art form.

Where did you learn your trademarks in screenwriting: shocking twists, reveals and betrayals?

I like turns in stories. That goes back to novels – the idea of an epiphany – of a reversal, some kind of reversal of fortune. But I was very influenced by thrillers – by Alfred Hitchcock and The Third Man, detective stuff by Raymond Chandler, and Dashiell Hammett (who wrote The Maltese Falcon, The Thin Man, Miller’s Crossing). And I did love the notion the loner in the dark streets, battling and trying to find their way, trying to find the good.

Which comes to your mind first, the twists or the story?

Usually the characters come first; some kind of situation with a character put into a dilemma comes first, and the twist comes last. The twist, I always hope, is a natural consequence to what’s happened before. It’s just how things play out.

How did you research your current screenplay, Backstabbers for Beginners?

It is based on a non-fiction book by a whistle-blower named Michael Soussan. It is about a corruption scandal at the UN that happened in about 2003 with the UN Oil-For-Food Program, a multi-billion dollar program to feed the Iraqi people, when they were hit by sanctions because of Saddam Hussein – weapons of mass destruction and all that.

Your 2004 adaptation The Manchurian Candidate is based on both Richard Condon’s original novel, and George Axelrod’s script for the classic 1962 film. How did you approach this project?

I did do an extensive amount of research as I was writing it around 2002–2003, and the events in the world were overtaking us.

I had to keep changing the script because things that we would make up would actually happen. They were already old news: things about the corporations and the military/industrial complex, corruption, and a lot of the backdrop of the 2000 election.

You wrote 25 episodes for The Marshall in 1995. How was the experience of writing for a television series?

My first jobs were Matt Houston  and Miami Vice, so I had been well-trained as a show runner. The writer is king in television. So you really do get to have a lot of power, and have a lot of influence over what gets made.

Jeff Fahey as Deputy Marshal Winston MacBride in The Marshall

Staying with television, you became the show runner this year for Bosch, based upon the best-selling novels about Harry Bosch by Michael Connelly. Where does Connelly’s storytelling begin and yours end?

He is an executive producer, so he’s on staff.  The Bosch show universe is like a parallel universe to the books, because we’re using some of the plots of the books to tell the series each season, but in a different order from the order that he wrote them in, and 20 years later.

So a lot of times, the science of police work and technology has changed, and changed the way the crimes play themselves out and get solved.

Bosch is also a little bit different. In the books he’s a Vietnam veteran and in our telling he’s a Gulf War veteran, and the order of events with his family and his personal life change.

It’s a lot like doing an adaptation. I feel like a part of our responsibility is finding Michael Connelly’s voice in the novel, and making the direct translation of that.

It’s like adapting Sum of All Fears (a screenplay that Pyne and Paul Attanasio wrote as an adaptation of Tom Clancy’s novel) or Manchurian Candidate. You have the luxury of having original material to build your structure on, but at the same time you have to figure out how to do it cinematically and dramatically as opposed to in prose.

What is the best advice you have given your students at UCLA and at Sundance?

The best advice I can give is: you write a script, you send it out, you see if it hits the market place. And if it doesn’t, you write another one. Don’t either give up because one didn’t, or keep slogging that single script thinking that somehow that’s your ticket.

It’s a career; it’s not a single thing.

I have gotten the same advice from novelists. A lot of novelists have written novels that they didn’t get published, and they just wrote another one. You learn from it; you get better. You never know what’s going to hit the marketplace; that’s the part you can’t control.

You have also worked as a film producer, director, novelist, journalist, advertising copywriter, cartoonist, sculptor and silk screener! How have these experiences contributed to your storytelling?

Copywriting taught me economy, because with advertising I wasn’t so good at the selling part. It taught me to do economical writing, and commit to writing things with very few words.

You have been quoted as saying “the narrative becomes more important than the truth.” This concept seems to define your novels?

Then we have the whole idea of fake news and alternative facts, but I haven’t quite gotten into that yet.

All of your work seems to possess similar touchstones about memory.

We can’t ever remember anything exactly the way it happened, as the mere act of remembering changes it. It is already changed when you’ve experienced it, because you’re looking back on it with a certain emotional framework.

That is really fascinating to me, especially in storytelling and cinematic terms. Because the way that we tend to write memory in films and in novels is as flashbacks, and as very accurate flashbacks.

I’m more interested in a jumble. Our memories jump around. They’re not accurate flashbacks; they tend to be almost like dreams. That’s how we remember ourselves; it’s the whole concept of our identity.

Do you have any tips for writers?

The only rule is don’t be boring. You need to engage and pull the person through. I’ve tried to apply that to everything – to prose too. You want to pull your audience or pull your reader through the story, as opposed to pushing them. You want them to be anticipating where you might go.

The books that we love are the ones where we think we know where they’re going, and we can’t wait until they get there, and when they get there they surprise us.