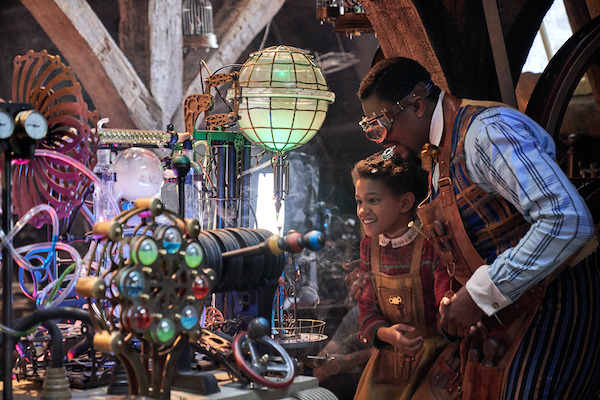 Imagine if we could all take a trip to Cobbletown and met Jeronicus Jangle (Forest Whitaker) from Jangles and Things? Now we all can in screenwriter/director David E. Talbert’s holiday live-action film Jingle Jangle: A Christmas Journey. Twenty-two years in gestation, Talbert’s extravaganza has finally found its day. “We need this movie more than ever. People need a moment to breathe, to laugh. to love, and to sing. The world needs something to rejoice and have permission to feel good,” said Talbert.

Inspired by the wonderment, magic, whimsy, invention, and dream of holiday films like Chitty Chitty Bang Bang, Willy Wonka And The Chocolate Factory, and Doctor Doolittle Talbert set out to create his own version of them with a cast “that represents how the world looks.”

Family movies need to speak to adults as much as they need to speak to children to be successful. “It will hopefully entertain the kids and inspire adults to revisit that thing they put aside for too long.”

The screenwriter defines his writing style as “soulful, spiritual, and visionary.”

Talbert’s greatest inspiration to write stories was his great-grandmother, Annie May Woods who was attached to his church. Talbert comes from a long line of pastors and knows about the power of storytelling to uplift people.

“Annie May Woods was my heart and my guardian angel. I watched her preach every Sunday morning and observe her words touch people. She weaved those words into inspirational stories that changed people’s lives.”

Later on when Talbert studied playwriting, playwrights Neil Simon and August Wilson helped shape his writing style. “I learned how lyrical dialogue could be in theater. I combined the comedic style of Simon with the lyricism of  Wilson to develop my voice.”

Jingle Jangle began its life as a simple love poem. At the bottom of it all is how love heals and regenerates. This sentiment is reflected in how Journey (Madelen Mills) helped Jeronicus heal, and rediscover his love of toymaking despite his fall from grace from his thieving apprentice Gustafson (Keegan-Michael Kay). Love brings out the magic.

Talbert originally envisaged Jingle Jangle as a stage musical taking his cues from popular shows like The Wiz and Showgirls over the years. Eventually, it became a feature but its theatrical roots remain apparent.

During subsequent iterations of the story, his four-year-old son Elias asked him if the Buddy 3000 robot [Jeronicus’ forgotten invention] could fly. Talbert senior answered in the affirmative. Then his son asked if he could fly too. “Yeah,” he responded enthusiastically. His son became the basis for the character of Edison (Kieron L. Dyer). “I saw the film’s wonder through my son’s eyes and gave it new wings,” added the filmmaker.

Creating a family film like Jingle Jangle is far more complex than it appears because it needs to appeal to a wide demographic. On one level, it explores the more tangible themes of the power of love to heal old family wounds and Jeronicus’ quest to get his toymaking mojo back. He was toiling in his workshop for thirty years before he perfected the toy that could fly. On a deeper level, It is also a story about time. Is Jeronicus still relevant? Has his time passed, or is his best yet to come?

The film explores the importance of possibility and belief which are neatly woven into the film’s dialogue. These multi-layered themes grounded the film based on Talbert’s feelings about himself at the time. “Jeronicus was me. After thirty years in the business, you question if you still have it. Is the project is still viable? Is my voice still valuable? Jeronicus’ journey of the belief that his magic was still there and the restoration of his family was my journey.”

The fantastical elements in the movie catered to his inner-child. “The inner child in me needed this movie more than I knew.”

Like many wonderful family films in the neighborhood, Jingle Jangle had its fair share of villains to test Jeronicus’ mettle and show his humanity.

Don Juan Diego (Ricky Martin) was the animated puppet that convinced Gustafson (Jeronicus’ apprentice) to “borrow” his book of inventions. Mr. Delacroix (Hugh Bonneville) is the banker who issues a firm ultimatum to Jeronicus, “Pay up or shut up shop.”

“I also love creating the possibility of redemption in villains. All they needed was an acknowledgment of their abilities,” espoused Talbert. “Not all people who do good things are good people and not all people who do bad things are bad people.” Gustafson needed to exercise patience as an apprentice to become as good an inventor as Jeronicus.

As a musical, the songs in Jingle Jangle weren’t merely a background soundtrack to the story. They were instrumental to the narrative. The original songs were composed by Grammy-winning songwriter Philip Lawrence and Grammy nominees Davy Nathan and Michael Diskint. Talbert wanted, “Something soulful. Something universal with a pop sensibility,” in the songs.

The screenwriter is not a musician so he could not personally write any of the songs. He conveyed his intention to the composers. “I had a feeling in mind. It was all about the spirit of the songs. I wanted the songs to tap into different genres from Motown to New Orleans Gospel… from cheery Disney-esque to anthemic Tribal.” Talbert’s aim was to make audiences think and feel about what the holidays are really about as well as inspiring them to revisit long-lost passions.

Jingle Jangle has an intense structure. It begins and ends with live reading a story from a book. It has voiceover narration, singing, and dialogue. This was more a matter of “artistic ignorance than by design,” according to Talbert. “It could have been magic or mayhem.”

His naïvity allowed him to break some conventions. “The only thing that matters in storytelling is that it works and I made it my own.” The foundation of the movie was musical theater. “We broke some rules to make it feel dynamic and original.”

David E. Talbert has excelled in a wide gamut of writing which includes plays, novels, poems, and screenplays. “The foundation of my craft comes from playwrighting which trained me to write strong character and dialogue.”

“My poetry helped it feel elegant. It allowed the story to move outside its usual box.”

“It started with Jeronicus, Journey, Buddy, and Gustafson.” However, Talbert couldn’t get the music to bring his idea to the stage. After he turned his sights to repurposing his story for the screen, he imagined what an Afro-Victorian world would look like on film. A stage play would only have a handful of locations while the possibilities on-screen were seemingly endless.

After they expanded the world of visual palette of Cobbletown, Don Juan Diego, Edison, Jeronicus’ Jessica Jangle (Anika Noni Rose), and the mailwoman Ms. Johnston (Lisa Davina Johnston) were added to the cast.