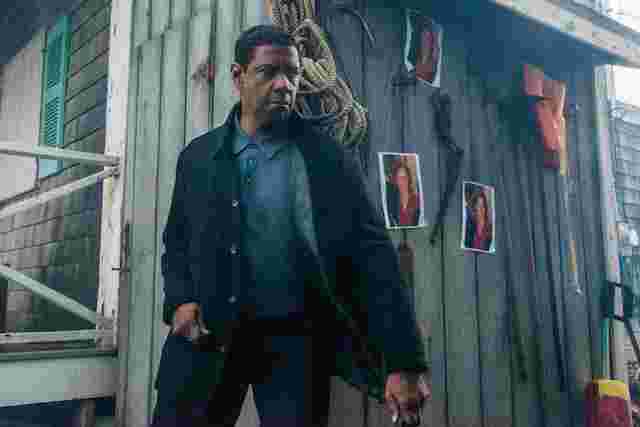 There are few actors working today who completely dominate almost every scene they’re in like Denzel Washington. His steely gaze, his physical bulk, even his rack of teeth flashing the grin of a shark – they not only trump everyone else in a scene, but they also project a power like few in cinema have ever exhibited. Morgan Freeman may have the “voice of God,” but Washington has the sheer presence of a deity. And in “The Equalizer 2”, the bad guys, and evil in general, never stand a chance against his avenging angel.

“The Equalizer 2”, written by Richard Wenk, and directed by Antoine Fuqua, let Washington dominate all the ‘rock ‘em, sock ‘em action,’ as well as find plenty of time for his ex-CIA operative Robert McCall to share his Zen life philosophy with everyone within earshot. Right off the bat, McCall calmly lectures a sleazebag transporting his young daughter on a train bound for Istanbul after kidnapping her from her mother back in Boston. McCall follows the criminal into the bar car, pummels the man’s cronies in a matter of seconds, and then offers him a choice between “pain that hurts” or “pain that lasts.” Viewing the crumpled bodies around him, the kidnapper chooses wisely and lets McCall return to the States with the child. The girl’s bookstore proprietor mom never finds out that her favorite customer is the one who performed the miracle. He does it for free, out of honor, and because he likes all the old tomes she orders for him at the store.

McCall himself is a bit of a relic himself. He not only reads out-of-print books, but he’s chivalrous to the bone, whether it comes to neighbors or strangers. He is a gentleman who washes the dirty dishes without having to be asked after his old boss Susan Plummer (Melissa Leo) brings him homemade soup. Everyone else around him seems jaded, but McCall sees a better way to be and will point the way. That way is one of discipline, principals, and morality.

McCall may be a secret fixer, leveling the playing field for the disenfranchised “little guy,” but his true public service is in the everyday codes he teaches. He shows neighborhood teen Miles (Ashton Sanders) how to take responsibility for his life and reject the influence of the street gang pressuring him. McCall advises his old partner Dave York (Pedro Pascal) to stay loyal to the Agency and the nation, even though he was unceremoniously dumped years back. Washington makes all McCall’s righteousness engaging rather than strident. Steven Seagal failed to achieve the same results in his films playing similar characters, coming off as little more than a smug prick, but Washington is a great actor and star who can sell it.

What’s impressive is that McCall is essentially a vigilante, not too different from the vengeful, killing machine-types that Liam Neeson and Bruce Willis keep playing, but in Washington’s hands, even his character’s wildly violent actions seem ethical and even laudatory. At 63, the veteran actor carries such authority that we don’t question McCall’s methods as he breaks ribs, wrists, and collar bones of a group of one-percenter johns who abused the stripper he Ubered home. Why call the cops when you can teach such yuppie scum a lesson in a far more arresting manner?

Yet, even with such displays of body-breaking, this sequel spends far more time emphasizing McCall’s relationship-building. He develops a paternal connection with Miles, and his friendship with Susan showcases a deep and decades-long friendship. Fuqua is an ace action director, but his ability to develop characters truly rises to the tops in scenes like these. He doesn’t rush these moments and ensures they never become dull. Instead, they help draw us even closer to McCall. Sometimes this film seems like a very different movie from its predecessor as there is more time spent mining McCall’s pain when he sees those he cares about threatened or harmed.

It’s almost as if Washington, Fuqua, and Wenk rejected many of the paint-by-numbers tropes of the genre and set out to make a second chapter that stirs the soul more than an audience’s bloodlust. That’s not to say that “The Equalizer 2” comes up short on exhilarating action because all the set-pieces play like gangbusters. Particularly riveting is a scene where an assassin tries to take out McCall while he’s driving for Uber, and the crafty ex-CIA operative swerves and spins his car around making the killer feel like he’s in a tumble dryer. The film also keeps a grip on its overarching plot about some rogue agents turning into a cadre of assassins, but that’s not where the filmmakers’ hearts are. They’re more invested in McCall’s time with his Miles or showing help him Holocaust survivor Sam Rubenstein (Orson Bean) reunite with his long-lost sister.

The screenplay isn’t even that interested in sorting out the logic and timelines regarding the assassin plot. Plot holes as wide as Washington’s grin pop up whenever the film returns to its main story, and York’s motivations are a bit flimsy when he’s revealed as the turncoat baddie. Is he still in the CIA? Is he freelancing for them now? For that matter, why is the retired Susan called in to counsel on the case? And if McCall is supposed to be ‘dead’ and in hiding, why does he appear all over Boston and D.C. without wearing a disguise? The film script should’ve smoothed out such intellectual issues, but again, it focuses on the emotional stakes at play instead.

And through it all, the noise and the quiet, Washington dominates, even surrounded by a group of terrific supporting players. He yields his words with the same power that his character handles automatic weapons. The film may end with a bombastic “High Noon” showdown between McCall and four baddies during a hurricane of all things, but in this sequel, the moments of solitude are the ones that speak volumes. The way McCall charms two little girls he’s just met eclipses any of his dispatching of a thug or henchman. All things being equal, it’s in the muted moments where Washington truly commands the screen.

Catch the trailer for EQUALIZER 2 HERE.