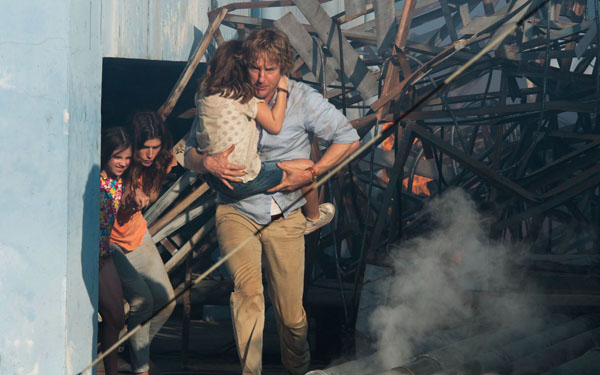 Don’t Be Good At Anything Else: The Dowdle Brothers on No Escape

Going to an all-boys, military Catholic high school turns out to have been excellent preparation for a career in filmmaking. Or at least, that’s the background of the brothers John and Drew Dowdle, and their latest film No Escape, starring Owen Wilson, Lake Bell, and Pierce Brosnan, has so far earned over $54 million worldwide on an estimated budget of $10 million.

The film was co-written by John and Drew, directed by John, and produced by Drew. Creative Screenwriting chatted with them about their film, its inspiration, and the challenges they faced in getting it made.

“We started writing together when we were very young,” says John. “When we were 14 and 12 our parents split up, and we were dealing with the emotions. I started writing poetry all the time. We shared a room, so I’d show stuff to Drew and he’d tell me, ‘You know, if you move this over there that would be stronger.’”

“The military thing was tough,” he says. “I had a hard time with that. I was kind of a hippie kid, and writing poetry was a pretty safe way to rebel.”

Some people have compared shooting a film to a military campaign, and Drew says there’s a lot of truth to that.

“A film is like a small army moving into a place for a quick campaign — and then you’re out,” says John.

“Our primary job is to convince a whole lot of people to follow us into something that might look like a terrible idea. People need to have confidence in you, and there’s an element of leadership there,” says Drew.

After NYU, John moved to Los Angeles, where he initially worked as a production assistant on commercials. “I’d work for two weeks and then I’d just live very frugally. The key to my life was no overhead. I didn’t own more than I could fit in my car. The first time my now-wife came over to my place, she opened up the fridge and all it had in it was an expired container of BacoBits and a pizza cutter.”

This allowed him to write 12 scripts in one year, including 65 drafts. “I had lots of pent-up energy. I literally spent all my time writing. I was just a machine that year. Really a lot of lessons of craft came from that year of real training.”

Meanwhile, Drew was an investment banker living in a penthouse. But John convinced him to come out to LA so they could work together in film, and Drew ended up co-writing and producing five of his brother’s films.

The brothers work together on story and structure long before the actual writing starts.

“There’s a lot of work we do up front to lay out the structure of the draft before John puts his fingers to the keyboard,” says Drew. “John is a better dialogue writer than I am. I’m more of a structure/character person.”

“We can write really fast,” says John. “But we also throw out a whole lot. We’re nearing completion when we have thrown out twice the number of scenes that are in the movie. It’s sort of a chaotic process, like a big, long game of improv.”

The idea for their latest movie came from a trip that John took with their father to Southeast Asia in 2006. “Right before we got to Thailand, a coup overthrew the prime minister,” says John. “There’d been no previous warning. There was a feeling of anxiety in the air. So I started thinking about that. If it went badly, what would I do?”

The brothers started working on the story in 2007. “But all sorts of things happened after that,” says John. “The Arab spring, the attack on the Taj Mahal Hotel in India…So we studied all of those things to see what parts would make it into the script. We have two little sisters who are very similar to the girls in the movie, and we’ve traveled with them extensively. A lot of our own family made it into the script.”

The brothers were aiming to make an “everyman” thriller, rather than a “superman” thriller like Taken or The Bourne Identity.

“It’s about a guy who’s like one of my friends,” says John. “How would I deal with it? How would Drew deal with it? What would an average dad do? How far would an average dad and mom go? That was really the crux of the whole movie.  The idea that this is someone with a background not at all useful in the situation. How do parents dig down and find that adrenaline and strength that allows them to pick up a car? The casting really needed to reflect that. It was important for Jack and Annie to be played by actors you hadn’t really seen in situations like that.”

Matt Damon as Jason Bourne in The Bourne Identity

Drew went back to the world of finance to seek funding for No Escape: John calls his brother “the king of spreadsheets.”.

“This movie fell apart repeatedly. I can’t tell you how many times we re-budgeted this movie. It took thousands of hours. When it collapsed the penultimate time, we carved off another $2 million from the budget and decided to take one last shot. We had a presentation and went to absolutely everyone. Thankfully Bold Films stepped up and saved the day. No Escape was so close to not happening.”

Even so, the budget remained small by Hollywood standards, and the brothers deferred a part of their own salaries.

“We had to find actors who really wanted to do this kind of movie, where the paycheck wasn’t the primary motive,” says Drew.

So how were they able to attract stars like Owen Wilson?

“Owen Wilson really wanted to do it,” says Drew. “He loved the script. He liked us. He really played ball with us. With Pierce Brosnan, we were able to schedule him so he was in and out in a week and a half.”

Finally, what advice do they have for wannabe screenwriters?

“Don’t be good at anything else — or you’ll do that instead,” says John. “If you really want to be a screenwriter, just write and don’t have a backup plan. Because the only guys who stick around are the ones who don’t have anything better to do.”

No Escape will be available on Blu-ray and DVD with a release date of November 24th.