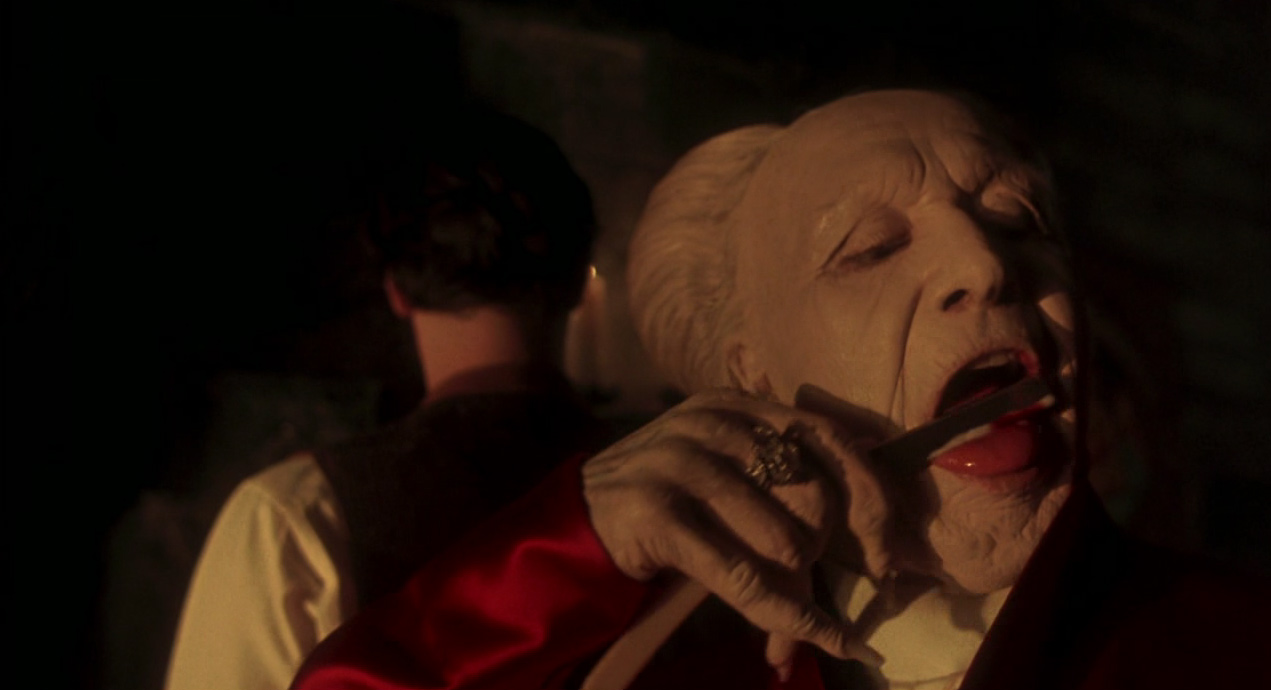 The year was 1992. I get a phone call at midnight in NYC. It is Francis Ford Coppola from San Francisco. He either couldn’t calculate the time difference or didn’t care. He has been in post-production on Dracula for several months and it is not going well. Another disastrous preview has the studio on edge. He asks [politely commands] me to get on a plane and come to San Francisco. He hates the film, hates the script, hates me for writing it, hates the cast, hates the studio, and he wants to show me the film to prove it.
“Great, I can’t wait to see it,” I replied facetiously.
It had only taken me 15 years of rejection and failure to finally get Dracula produced. And I had one of the greatest directors in history at the helm of a disaster in the making. How was that possible? What had gone wrong? Could this film ever rise from the ashes?

The next night I met Francis at the Zoetrope building on Kearny St. in San Francisco. He escorted me to the basement screening room, the Godfather room, with big leather couches, cigars, wine, brandy, two women who spoke only Romanian, and made sure I was comfortable with instructions to call him in his penthouse after I finished watching this film he hated and he would join me to discuss.

He was right. For 2 hours and 10 minutes, I watched the worst piece of film I had ever seen. The one I wrote. I was comatose, destroyed, drunk, and pissed. Coppola finally called the screening room since I had not made contact.

It is midnight now and Francis descends from his mountain top and joins me for the aftermath. And then with complete delight and enthusiasm, Francis Ford Coppola tells me the story of the film, Dracula, that he wants to make.

I laugh, I cry, I’m puzzled. He tells me the story of the screenplay I thought I had written, and the film I thought Coppola had directed as I had seen the dailies and been on the set for much of the production. A little late to start over with an October release date less than 4 months away.

Coppola invited me into the editing room to spend the next week reviewing every scene, shot, other footage not used, etc. in service of the narrative Coppola had pitched and the script we shot. We revised the shooting script with the existing footage in the editing room and wrote new pieces, bits, inserts, tags, beginnings and ending of scenes into the narrative that we had somehow missed in the scripting and shooting stages of the production.

Coppola skillfully convinced the studio that he needed to bring the cast together and shoot these narrative revisions at a substantial cost, to deliver the audience a satisfying ending and, of course, to help the studio recoup their millions in production costs.

The best example of the problems the original shooting script did not reveal is the ending. This complete ending was not in the shooting script and went through several stages of additional development to arrive in its final form.

In my original shooting script, Mina [Winona Ryder] and Dracula [Gary Oldman], retreat into Dracula’s castle chapel where, Dracula, mortally wounded by the Bowie knife [not a stake] plunged into his heart [yes vampires have hearts they just don’t beat], begs Mina to give him peace.

Mina obliges, forcing the Bowie knife down through his heart, impaling him to the chapel floor. Mina’s curse of the vampire is lifted from her, Dracula’s soul is released and he dies in peace. Redeemed….

Then, according to the shooting script and the footage shot, Mina leaves Dracula’s lifeless body at the foot of his chapel cross – exits the castle –

— AND LAUNCHES HERSELF INTO THE ARMS OF KEANU REEVES [JONATHAN HARKER] THEN WALKS OF INTO THE TRANSYLVANIAN SUNSET AS THE MUSIC SWELLS.

The audience at the previous sneak preview booed and yelled and cursed this ending. Clearly, the audience wanted Mina and Dracula to somehow end up together.

Why couldn’t we have solved this in the script development stage before shooting to avoid ending up in the editing room with a film that does not work? How did I not realize this in the writing stages? How did Francis Ford Coppola, the Maestro living legend, not see this coming?

Coppola screened an improved cut for George Lucas and Mike Mignola, a then up and coming graphic novel artist before he created Hellboy. Lucas nailed what was wrong with the ending. We had broken the rules of how to kill a vampire that we had established in the film; the only true way to kill a vampire is to cut off their head and cut out their heart, then burn it. Which is exactly what Van Helsing and his Vampire Killers do to Lucy in the film.

Lucas was spot on. The rules were right there on the screen.  In order for Mina to give Dracula peace, she has to cut off his head with the Bowie knife she had plunged through his heart.

That meant bringing Winona and Gary back together to shoot the new moments and bits we needed to complete the narrative. Gary and Winona as literally been at each other’s throats by the second week of shooting. They had even refused to pose together for the photo shoot with the famed Albert Watson to be used for the poster promoting the film. They would never get together again for additional filming.

I remember Coppola calling me with this proposition –

“Do you think we can get Winona back to cut off Gary’s head?”

“It’s the only way you will get her back,” I replied.

Francis assembled a crew including legendary cinematographer Michael Ballhaus, and cast, including Anthony Hopkins, Gary, and Winona, all one big happy family, back at Sony studios, months after the principal photography was completed and sets had been struck, and filmed the missing parts of the film narrative, including Winona cutting off Gary’s head.

Coppola’s mastery and execution are seamless. In the film’s climax, when Mina decapitates Dracula and sets him free, there are close-ups, medium shots and high angles that were filmed almost a year apart.

Bram Stoker’s Dracula opened in October of 1992 to a record-breaking $32m weekend in 1997 dollars, and went on to gross 215M worldwide on a $40m dollar budget. It was the 9th highest grossing film that year.

But what haunted me was the nagging of the faults and inadequacies of the script during principal photography that were only discovered in the editing room during post-production. I was determined to find, steal, or create a method, a tool, a philosophy that could highlight these problems in the script development stages and address them prior to production.

There had to be a method, or a tool, or a program that could be applied in the screenplay development stages that could potentially head off these kinds of CREATIVE CRISES. And if there wasn’t, there should be. The foundations for HartChart were laid.

Coppola gave me the key. The three magic questions to ask and answer about your characters before writing the script:

I realized that by answering these questions about each main character in your narrative, I would be creating a character-driven 3 act narrative [or 7 or 10] rather than plot driven.

Literally, my own heartbeat added the final ingredient to the story brew of the HartChart. While having my annual heart exam and EKG, I watched the needles tracking my pulse on the graph and posed to my Cardiologist I should wire myself up when I watch a film [or now binge watch TV] and see how my heartbeat is affected by what I am seeing and experiencing.

Then the epiphany, lightbulb, aha moment. Could I measure/forecast the heartbeat of my characters as I was writing the script, and plot their emotional journeys on a chart like my EKG?

Could a chart take the pulse of my characters in any scene or sequence and measure their ups and downs, victories and defeats, progress and setbacks from beginning to end!

The first chart [hand drawn] I did for myself was to test it against Dracula in its finished form. The HartChart became popular with writers and directors in Europe, Australia, China, New Zealand, Brazil, and at the original Austin Writer’s Ranch where the chart was born.

Guy Goldstein, the creator of the screenwriting program, Writer Duet approached me in 2015 at the AFF and proposed developing the HartChart as an online screenwriting tool using all of the components I had developed over the years, so writers could chart their own scripts and stories online and create new charts at will that would be readily available on their iPads, laptops and mobile phones.

We writers are the composers, not the conductors. We are the job creators. As the great Frank Pierson said to me — remember, no one in this industry has a job until you type “The End”.

Find out more about HartChart by clicking on the link below: 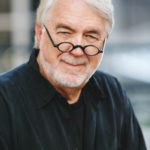 JAMES V. HART (J.V.) was born in Shreveport, Louisiana and grew up in Ft. Worth Texas on Drive-In Movies and Saturday Matinees. His writing/producing credits include; HOOK, directed by Steven Spielberg based on an idea by Hart’s then 6 year old Son, Jake, BRAM STOKER’S DRACULA, directed by Francis Ford Coppola, MUPPET TREASURE ISLAND, directed by Brian Henson, and CONTACT, directed by Robert Zemeckis. Other writing/producing credits include: MARY SHELLEY’S FRANKENTSEIN, TUCK EVERLASTING, JACK AND THE BEANSTALK: THE REAL STORY. SAHARA, LARA CROFT: TOMBRAIDER – THE CRADLE OF LIFE, AUGUST RUSH, EPIC, and the TV series, CROSSBONES. Hart has served on the faculty of the Columbia University Graduate Film program. Served as mentor and advisor at the Austin Writer’s Ranch, Sundance Film Labs, and the eQuinoxe-Europe Writing Workshops for over 20 years in 11 countries. Hart has also conducted the Puglia Experience for writers and producers held in the Puglia region in Italy. Hart is a co-founder of the Peter Pan Children’s Fund, a non profit that fosters youth philanthropy supporting Children’s Hospitals, has served on the Meadows School of the Arts board at SMU, is a founding member of the Writer’s Guild Initiative board, and founder of Lionfish University, a non-profit dedicated to reef preservation and conservation. His renowned story mapping tool app, THE HART CHART, was launched online at the 2015 Austin Film Festival. “Go with Gravity” is Hart’s primary mantra for the writing life. Never Grow Up! Never Give Up! <br> <table> <tr> <td><a href="http://www.hartchart.com"><img src="https://creativescreenwriting.com/wp-content/uploads/2016/08/website-2-small.png" style="height:25px"></a> </td> <td><a href="http://www.hartchart.com">www.hartchart.com</a> </td> </tr> </table>