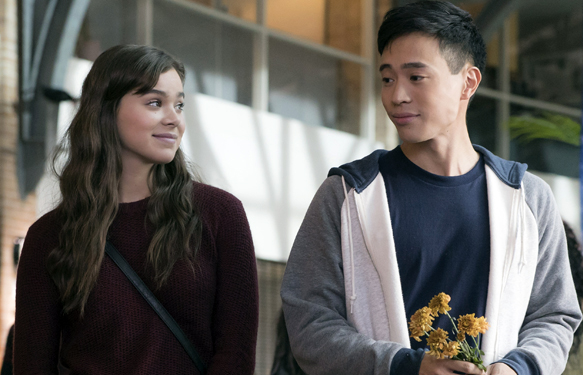 James L. Brooks and Kelly Fremon Craig on The Edge of Seventeen

The Edge of Seventeen is Kelly Fremon Craig’s screenwriting and directorial debut, and is already being compared to such beloved teen drama/comedies as Mean Girls and Juno.

It’s the story of Nadine, an awkward student with the usual stresses of high school and clashes with Mom. But then she’s faced with a more serious tragedy, and when it’s all capped off with her best friend starting to date her older brother, she’s quite sure that her life is over.

The witty protagonist (played by True Grit’s Hailee Steinfeld) wins you over in the first few minutes, the story both entertains and resonates, and Craig’s unique voice shines through the entire production, making it one of the more surprising and memorable features this year.

It was Craig’s voice that drew the attention of James L. Brooks (Mary Tyler Moore, Taxi, The Simpsons) when she went for broke and sent him the script. Having previously mentored other filmmakers including Wes Anderson and Cameron Crowe, Brooks agreed to produce the film and be a mentor to Craig throughout the process.

The Edge of Seventeen was the closing night movie for this year’s Toronto International Film Festival, and Creative Screenwriting met with Craig and Brooks to discuss the film and their partnership.

Nadine’s could be considered a coming-of-age story. But some of the issues facing her are more “adult” than those a typical teenager would go through. What kind of struggle did you want to portray for your lead character, and how did you find the humor in it?

Kelly: There were a few different things. At the core of it, what I found really interesting and wanted to explore was just that feeling that I think a lot of us get where you start to worry that everybody is OK – except you. Everybody has it figured out, everybody’s having more fun…and you’re just kind of messed up, you know?

That became the central issue that I wanted to explore. When you talk about the more adult issues, I think that when it came to the family, it was interesting to me to explore how people react to loss in different ways. The ways in which we deal with a difficult thing in our lives.

Nadine deals with it by being mouthy and acting out, with the attitude of “nobody has ever felt this much pain, so I can’t relate to anybody and they can’t relate to me”. And her brother Darian masks it with a caregiver mindset – “I’ll take care of everything”. And then there’s her mother, Mona, saying “I’m a victim of all of it and no one hurts as much as me!”

Did you do any kind of research to create these characters?

Kelly: Yes! One of the things I’m so grateful for is that when we started this process, Jim said “spend some time really researching teenagers and making sure that the details are right”.

So I spent about six months just talking to every teenager I could get my hands on. Hanging out at high schools and just being a fly on the wall and all of that. That really changed everything.

When you’re talking to them as human beings and talking to them at length, and asking a lot of personal questions, you see how complicated it is. It’s an age that I think is easy to shrug at and be like “just pull your head out of your ass, it’s not that big of a deal” – it’s easy to paint it with a broad brush. But it made me want to pay respect to how complicated it is.

Hailee Steinfeld as Nadine and Haley Lu Richardson as Krista in The Edge of Seventeen. Photo by Murray Close – © 2015 STX Productions, LLC. All rights reserved.

The music was very thoughtful, and seemed to play a big role in the film. Were the songs chosen based on personal taste, or was there an underlying theme at work?

Kelly: Yes, the music was a big deal, and is a big deal. I really wanted it to feel timeless, and that reflected Nadine, in that she sort of feels like an old soul trapped in a young body and that her tastes are older.

But I think it also reflects how she’s stuck between being both a teenager of 2016, and nostalgic for these times before her when it seemed like maybe she would fit in with those kinds of people.

How did you and James become connected?

Kelly: I had written a spec version of this film, and had been just an insane fan of Jim’s for years and years. He was the crazy longshot I took in the beginning! And one I never thought would actually work. But I sent him the script and he ended up taking on the project.

James, how do you decide who you will mentor? Is it more filmmaker- or project-based?

And it’s great for me to take a break from my own way of seeing things, and to work in the fields of another perspective and another focus – that’s good for me. It’s a gift to myself, really.

Hailee Steinfeld as Nadine and Woody Harrelson as Mr. Bruner in The Edge of Seventeen. Photo by Murray Close – © 2015 STX Productions, LLC. All rights reserved.

Kelly, this may be a huge question, but as this film is your screenwriting and directorial debut, what did you learn from the partnership?

Kelly: (laughing) Do you have several hours? Man…a lot of things.

A lot of times it’s messy, and it’s a lot of things at once. But it’s about constantly asking “is this as true as it could be?” or “are we really getting this right?” and learning to be inexhaustible about that.

James: Nobody had to teach you that!

Kelly Fremon Craig on set of The Edge of Seventeen. Photo by Murray Close – © 2015 STX Productions, LLC. All rights reserved.

Kelly: But it was important to me to see you be inexhaustible about that. It showed me that it was worth killing yourself over, you know what I mean? That was a big thing to me.

I think another thing is that there are no small things. The details really, really matter, especially when you’re trying to capture something honestly. If one little detail is off – if the way a character says something isn’t really the way an actual teenager would say it – I think that can lift an audience out of the film.

James: And there was also the costume. She went nuts over that.

And the last thing I’ll say that I think is good for anybody writing or directing – and this is a big thing I learned from Jim – is to get choices. You go to the set with a thing in your head…but I learned how important it is to try a lot of variations of that. And to let the actors guide what happens.

But get choices, because so much of your movie is made in the editing room. And you’ll really want those choices when you can see the whole movie in context. You’ll want to be able to say “We need a little more of this and a little less of that”.

There’s a line early on where Nadine is describing her new best friend as a child, and she says “She dressed like a small elderly gentleman”. It was so unexpected, but hilarious and something that really stuck with me.

Kelly: Others have said the same thing!

James: You know Ramona, what you just said really hit me – I think I just had an insight into the picture. You’re the second or third person to mention that line of narration. And when a line of narration registers like that, the narrator becomes somebody the audience trusts because they get rewarded in a way they didn’t anticipate.

That line becomes so damn important because now when the narrator talks, you’re on their side. And speaking of creative screenwriting, I just think that’s a big deal about narration. The narrator has just entertained you in a way you didn’t expect.

Blake Jenner as Darian and Haley Lu Richardson as Krista in The Edge of Seventeen. Photo by Murray Close – © 2015 STX Productions, LLC. All rights reserved

James, what was it you saw in this script that made you want to get behind the film?

James: It was more a sense of Kelly than the script, in all honesty. It was more the energy that was going to be uncoiled…and she did say nobody would ever work harder and that was true.

But the hard work was not in refining that script. The hard work was just to clear the runway for her voice to happen. So it wasn’t really about “will this idea make the screenplay?” It was just one of the most extraordinary things when I read that second draft.

James, you’ve been in filmmaking for many years and have seen it change immensely. How do you feel about the industry today, specifically for screenwriters?

James: Writer is king in television. And television is undergoing a sustained renaissance. I think it’s great. If you’re a showrunner on a comedy show, it’s great. Television series, to me, still remains the best job there is.

Television is very writer-oriented and so is my little company, Gracie Films. It’s always about a writer having a good measure of control over their work. We also think that, knock on wood, no writer is ever going to be rewritten by another writer. So that’s been good and it’s been good to be around. It’s what I believe. And from what I’m hearing about this year, if it’s a great year for film, it’s a great year for screenwriters.

Is there any advice you could offer our readers?

James: The edge a writer always has is you can’t stop them from writing. With so many other professions, you need like 19 people to get together. Here the blessing is the curse. I always console myself when things seem grim and all pictures are like every other picture by remembering there’s always somebody typing away who’s going to change something.

Featured image: Hailee Steinfeld as Nadine and Hayden Szeto as Erwin in The Edge of Seventeen Photo by Murray Close – © 2015 STX Productions, LLC. All rights reserved.