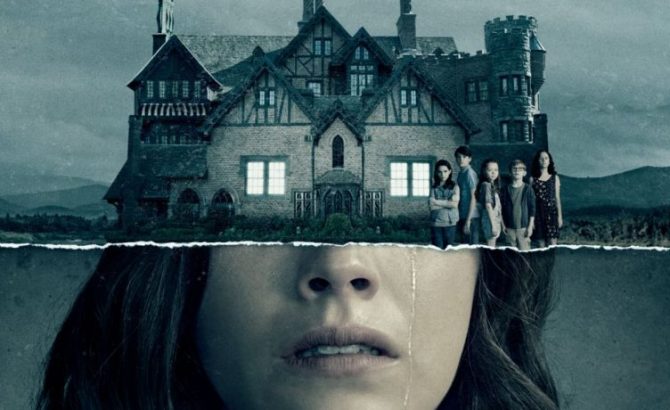 The Haunting Of Hill House made waves in the Netflix universe. We previously reviewed the series in Creative Screenwriting Magazine. Screenwriter Mike Flanagan spoke with us about his creative process.

Inspired by Steven Spielberg’s Jaws and Brian De Palma’s Untouchables, filmmaker Mike Flanagan knew he wanted a career in the film business. As a kid, Flanagan would gather friends to make replicates of The Untouchables and Stephen King’s It.  These days, he’s known for Netflix’s The Haunting of Hill House, and he’s scheduled for the adaptation of Stephen King’s Doctor Sleep, the follow-up to The Shining.

“When I when I was in college, I started making shorts, and then eventually digital features that were really kind of just reflections of what was important to me at the time as a 19-year-old. So it was a lot of kind of collegian dating dramas that had no commercial viability whatsoever,” joked Flanagan.

A 2005, short called Oculus started to move the career needle for Flanagan from amateur to professional. “I don’t know why it took me so long to kind of realize that horror really was the language I was best at speaking and was actually the genre I was most interested in. I was trying to make a lot of stuff before that, that felt important to me [but was] really the musings of a teenager.”

The Haunting of Hill House

Warning – There are spoilers for The Haunting of Hill House below…

For the adaptation of The Haunting of Hill House, it’s really about creating a horror series on the foundation of a family drama. “I always looked at it as a family drama, first and foremost, that happened to be kind of wrapped in the skin of a ghost story. And one of the concepts that we talked about the most in developing the series was Six Feet Under, which is one of my favorite all-time favorite TV shows.”

“The hope was that if we could strip away all of the genre elements from the haunting, that it would still stand up as a character-driven, effective family drama. That was always the criterion that we were operating under,” said Flanagan. “The horror elements are most effective when they bolster human drama, when they are born of the characters instead of something that the characters are reacting to.”

As for the storyline, Haunting is quite complex. There are seven main characters, shifting time sequences, and various twists and turns throughout. “The hook of it from the pitch was that we were going to do a show about people who had grown up in a haunted house, but deal with the effects it had on their lives years later.”

The focus, therefore, is on the Crain family. The first points focused on the character, Nell Crain, portrayed on screen by Victoria Pedretti. “Nell was really the focus for me. Nell and the neck lady arc was the spine of the show from the beginning, and everything else kind of was built from there. We focused primarily on the present day storyline with the siblings, then went back and started to play with the past.”

The challenge then came from weaving the storylines together, which Flanagan actually experimented with before in Oculus. “It was fun to juggle and braid those two timelines, but that there wasn’t nearly enough time getting you to know that it was a feature. There wasn’t nearly enough time to explore it as much as I wanted to. So just seemed like the perfect opportunity to do that.”

“I knew that if we did it, at the midpoint, we’d need to have another reveal in the final episode, that would need to have as much weight. We didn’t know what it was, though, until the writer’s room came together. I think was the second day of the writer’s room, we hit on the Red Room twist. And between the two of them, I felt like we were covered.”

As for the bent-neck lady, Flanagan didn’t think the twist would work any later in the series. “Every time she appeared on screen, she threatened to give away the twist, so I felt like we’d only get away with it for so long. Once we knew the truth, I really wanted time to be able to let that sink in, and to deal with the character, and the tragedy of that reveal.”

Unlike other stories, however, ghost stories can always bring back characters in another form. “It’s something I love about TV shows like Buffy the Vampire Slayer, that would frequently kill characters and who stayed dead. It mattered quite a bit that  The Haunting Of Hill House had the freedom because of the supernatural crux of it to bring people back in different forms, were to resurrect them entirely. So it’s far less frightening to imagine killing a character who can be a ghost in the next episode.”

Flanagan also has a unique point-of-view as a filmmaker because he’s a writer, director, and editor. With every shot, he’s thinking of the edit. “I started my career as an editor. I’ve always believed that that’s where the movie or episode really becomes what it’s meant to be. Editing is the battleground.”

“Every step I take, and when I sit down to write, or when I’m on set coming up with how to approach the scene, I’m only thinking about the edit,” he said. “At that point, all of the other voices, all of the other pressure, whether we’re over or under budget, all of that doesn’t matter. The only thing that matters is the footage that’s in my bin.”

“More footage for me means fewer options,” he joked. “It changes the way I write on the page. It changes the kinds of things I’ll create. It affects where I stage things geographically within a story. It completely affects my shortlisting process, and in my scene breakdowns on set. It changes how I deal with actors because I’m thinking entirely about the edit. I’m not trying to get options, I’m trying to get what I need to build what I know I want to make.”

On set, Flanagan likes to bite off a little more than he can chew. With a specific list of what he needs, there’s always time to challenge the time and budget of the story for the greatest footage. “There’s never enough money and there’s never enough time, but these limitations are natural to the business.”

Through these complex processes, the writer-director still worked to make the series as rewatchable as possible, which began in the prep work. Described as “appointment TV,” he said it was meant to be a show people may want to watch over and over again, perhaps like Netflix’s other hit, Stranger Things, for Halloween. This meant planting in Easter eggs for fans to pick up on multiple viewings, such as ghosts in the background or the E.T. lunchbox in the tree house.

“The ghosts are like candy, but we had to kind of make sure that the story was complex enough as well, so there would be something for them to find outside of just a scary face, but that’s a very intentional thing.” Ironically, the team also used data from Netflix to highlight what made a series rewatchable.

“The timelines being braided and drastically nonlinear was always part of the concept of the structure of the show. We didn’t know that the Red Room was going to require us to kind of go back and reframe a lot of these scenes until it was the second day of the writers’ room. And, what that did was really break open a bunch of scenes in those first nine hours.”

“So, if you watch this a second time knowing this truth about the Red Room, it changes all of these other scenes behind it. That’s the kind of stuff you really want to find in a series like that. But I think for how that translates to a viewer is that they’re kind of guaranteed a different second viewing experience. Even showing the same moment, again, with this new information changes everything. That carries over the entire series, mostly thanks to the Red Room.”

As for the ending, the TV writers knew it may come off as polarizing, but they wanted to be optimistic rather than pessimistic, which goes against the traditional grain of the genre. “Our decision was to try to end on a note of hope, and peace that the characters have been through so much over the course of the series, and we had been through so much with them, that all of us were really hungry for that.”

Currently, Flanagan and company are working on the second season of The Haunting Of Hill House, but it won’t involve the Crain family or Hill House. Since the show is about “haunted people in haunted houses,” however, it will have a similar theme. Mainly, Flanagan is focused on telling stories “important to you, that have meaning to you.”

“To connect to a wider audience, tell your personal stories wrapped in the cloak of a universal and popular genre. Lean into the requirements and the tropes of that genre and let the devil be in the details. Let the personal story you’re telling be nice and nestled within that, as opposed to trying to change the world with someone so specifically personal it can’t find the audience.”

In the meantime, however, fans of the horror can prepare for Flanagan’s take on Doctor Sleep. “I fell in love with the horror genre because of Stephen King,” he said. “It has been one of the most singularly exciting movies I’ve gotten to work on in my whole career. I took this movie about as seriously as I’ve ever taken anything in my life. I am incredibly excited and proud of what we made and I can’t wait for people to get to see more of it.”

This article has been condensed. Listen to the full audio interview HERE.