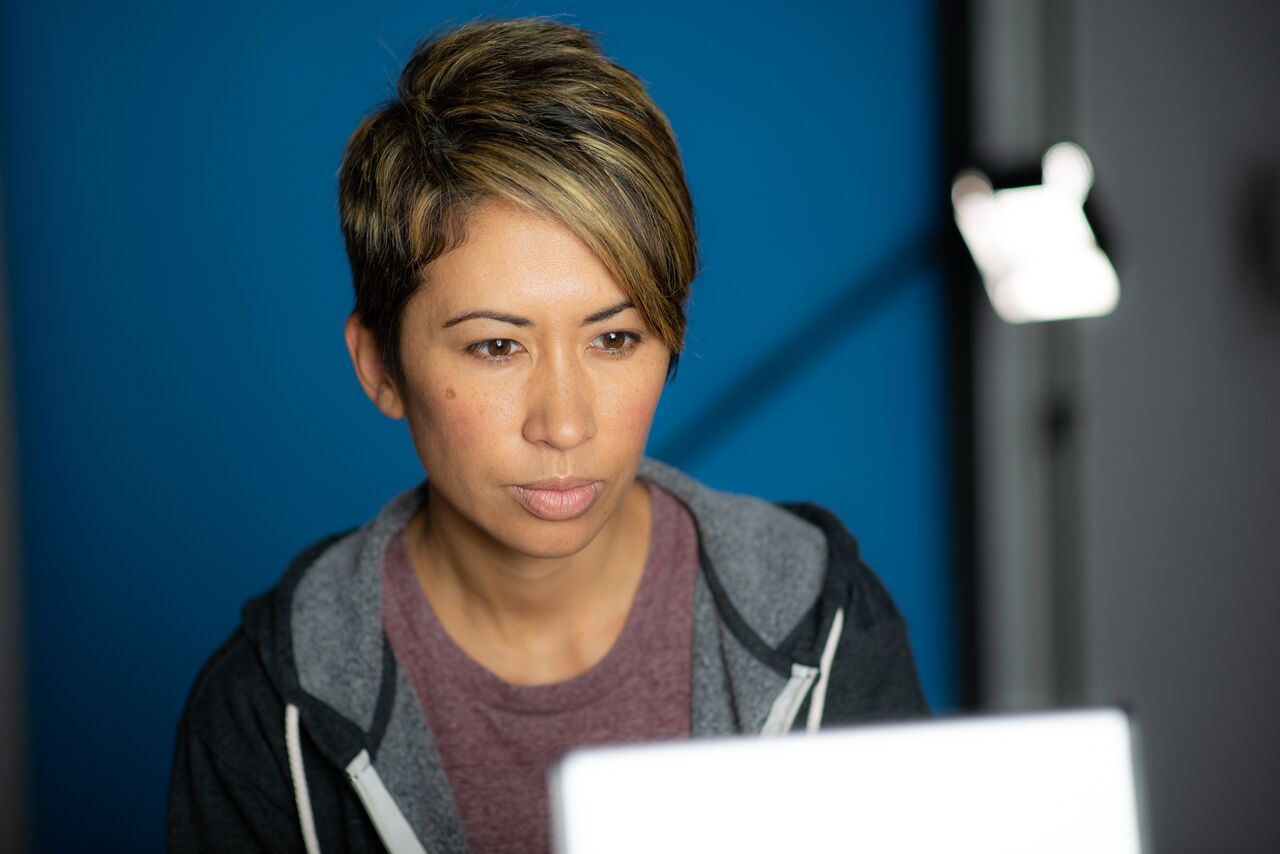 As part of our continuing series showcasing up and coming screenwriters, Creative Screenwriting Magazine spoke with Elaine Loh. Elaine was just named a Top 25 Writer to Watch in 2019 by the International Screenwriters’ Association and has had scripts place in the PAGE Awards, Austin Film Festival, and Final Draft Big Break (Top 10). Her produced works include winning the Grand Prize of the NewFilmmakers LA On Location Project, an Honorable Mention at the NBCUniversal/YOMYOMF Interpretations contest, and having two films accepted to Academy qualifying festivals. Elaine is currently writing/directing a short form series about online shaming called Doxxed.

My Chinese dad was raised Buddhist. My Portuguese mom was raised Catholic. They met at Brandeis, a predominantly Jewish school, and had two bi-racial kids with no religion. We moved seven times before I was twelve years old. Sometimes I felt like I didn’t fit in anywhere – not Asian enough while living in Asia, not white enough while living in the US – but all the moving and shifting between social groups made me incredibly adaptable and able to see from perspectives that weren’t necessarily my own, thus starting my writer/director imagination.

The project that caught ISA’s eye is Stringer. It’s a one-hour action drama pilot about a woman who is a stringer – a person who runs around in the dead of night filming car crashes and police chases in order to sell the footage to the nightly news. The script won the Grand Prize of ISA’s Table Read My Screenplay Hollywood contest.

I’ve been a working actor for over a decade, but I started writing because I felt like I kept hitting the “bamboo ceiling” as an Asian American woman. Too many nurse and receptionist roles. I realized that I wanted to be a part of the change that is finally starting to happen in Hollywood and that I wanted to help get more under-represented stories told.

I took to writing (and directing and producing) as a way to create work for myself. I didn’t want to be a writer. BUT, as I learned how to write, as I gained validation from my peers, and as I received professional recognition, I started realizing how much I actually had grown to LOVE writing. I was on set a few months ago for my independent series and I wore all the hats. I wrote it, directed it, and starred in it.

And I had this quiet moment amidst the swirl of electric energy on set, where I suddenly had an epiphany of the order of my creative loves: writing first, directing second, and acting third. I had been focused on acting for so long that I didn’t realize it wasn’t even my main dream anymore. So, now when I write, I create characters that someone like me could play. It is actually MORE fulfilling to think of some other young Asian American actor getting to play a role that I’ve created than thinking of myself playing that role. I think I’ve transitioned into creator instead of participant. It feels good.

For the craft – I force myself to write a certain number of hours every week. I will do literally anything – clean my toilet, bake a cake, walk my dog – before I finally sit down to write. So, if I don’t have a quota to fill, I won’t do it. It’s like going to the gym. I never ever want to go, but once I do, it feels so good!!! So, that’s the discipline.

Next up is the bravery. I think screenwriters need to be willing to tell personal stories that scare them. Is it embarrassing? Is it painful? Is it a secret? I don’t mean you have to only tell stories that you’ve experienced, but rather, the emotional content behind the story needs to be real. You also need to be brave and willing to show your work to people and get feedback. It’s the only way to gauge yourself and to improve. And finally, in terms of patience…

For the business – While the actual skill involved in screenwriting is the most important, I also think it’s a fallacy to think that the craft is the ONLY thing necessary to succeed. I think you need to be willing to put yourself out there and chase opportunities. I am disciplined about submitting to contests and meeting their deadlines. I am brave about reaching out to executive producers, showrunners, and other higher-ups, asking them to read my work or take a meeting.

And I am patient about following up with them. They say it takes twelve points of contact to make a sale. I don’t give up if I am rebuffed. I am a very polite and professional little stalker.

As I mentioned earlier, Stringer is a one-hour action drama about the people who film the news. Some people ask if it’s like Nightcrawler (the Jake Gyllenhaal / Rene Russo movie). It is set in the same world of television news, but it is not about faking the news for better ratings. It’s actually a family drama wrapped in a big action bow. It’s about an Asian American woman, her mother, and her sister. It also deals with what it’s like to be a woman in a predominantly male field.

I wrote it because I think that the only way to really fight racism or sexism (or other -isms) is to secretly infiltrate hearts and minds. If you tell someone, “Don’t be racist”, they are likely to roll their eyes at you – or worse. But if you hide that message inside an entertaining character driven story, then they are likely to agree with you. To me, that’s the power of television and film: help change a few minds without anyone even realizing it’s happening.

I call myself an “artivist”. Artist + Activist. (Thank you to my former writing partner for coining this term!)

What did you learn with each draft of your script?

Oh man. Sometimes writing a new draft feels like torture. Because the excitement of WRITING is done and now the hard work begins. I had a showrunner friend read a draft of Stringer and he TORE it apart. In a good way. Slightly painful, but good. But, for all of his amazing notes, I also knew that some of them were wrong. They were wrong for me and for the story I wanted to write.

So, sometimes a new draft helps me figure out what’s most important to ME. I can’t please everyone, but maybe I can please myself. If I write simply to try to impress someone else, the whole thing just comes off as schlock anyway. So, re-writing can help me actually figure out the true story.

Hmmm…. I don’t know! Maybe I have a ton of misconceptions, but I just haven’t figured them out yet!!

Whatever’s in the air can inspire my imagination. If I can’t write it at the moment, it goes into my trusty google doc entitled “Ideas to Remember”.

I tend to write grounded character dramas with lighter moments. I like blurring the line between drama and comedy. I mostly write television, but I have several features in the can and have had some of my short films win prizes. So I don’t always stick to TV. I also have my short-form series. But, my themes always have to do with crossing boundaries.

My central question is: How can you get what you want without hurting other people? My answer: You can’t. We all make choices in life that affect other people and I like exploring what happens when the line is crossed.

I read a lot of books on screenwriting. But mostly I just keep writing and showing it to people. Every script I write helps me improve my craft. Every note helps me hone my skills. I have a writers group that I belong to. I have a consultant that I work with (Carole Kirschner). I have a great manager who helps me develop ideas. I read a lot of scripts. I study things that are on TV currently. How long is a scene? How quickly does an act move? What does a good flashback look like? How do you still care about an unlikeable character?

Yes. Of course! I won’t list the personal ones, but there are a number of people who have greatly influenced my career and help give advice. Most of them have won Emmys! So, yeah, I listen to them!

As for heroines that I don’t personally know but I greatly admire. Sarah Schecter (producer with Greg Berlanti), Julie Plec (producer with Kevin Williamson). Of course Shonda Rhimes!! Lisa Joy (Asian American showrunner of Westworld). Ali Wong!! Phoebe Waller-Bridge (Killing Eve, Fleabag – LOVE). Karyn Kusama (The Invitation was phenomenal). Emily Kapnek (I love Splitting Up Together). I mean, the list goes on and on.

A few years ago, I read an article titled, “Why You Should Aim for 100 Rejections a Year” by Kim Liao and it completely changed my perspective. I had been aiming to win things. And then when I didn’t win, I felt like a piece of dog poop. But, when I started aiming for rejections, I submitted myself much more widely and I felt just dandy when I got another rejection. The amazing thing is, when you put yourself out there 100 times a year, you are BOUND to get some wins along the way too.

And so, if you want to be on the ISA Top 25 list, I don’t think you can aim to get it. Just do good work and get it out there. The list-makers will find you. Special shout out and thank you to the ISA for finding me!!

I really enjoy shaving my head. I have always been a girly girl but recently I chopped all my hair off and shaved a side of my head. I get this great feeling of ANARCHY when I shave my head. It’s hilarious how bad-ass it makes me feel. (If you meet me, you’ll understand why this is so funny. I am the opposite of bad-ass.)