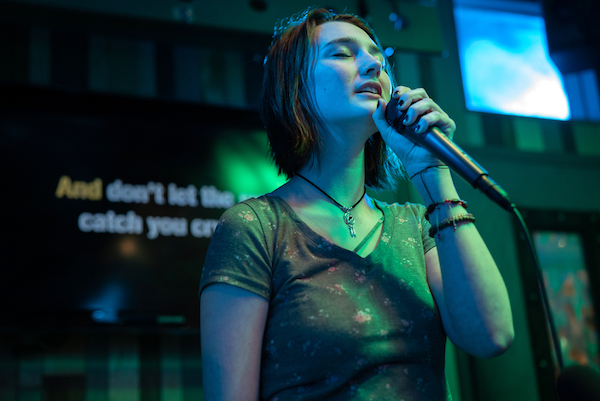 It’s been a good year for independent filmmaker Eliza Hittman thanks to Never Rarely Sometimes Always making waves in the global festival circuit; a film about the countless obstacles women with unwanted pregnancies face in a hostile environment.

“It’s a deeply personal film on so many levels although there is nothing autobiographical about it,” said Hittman. “The film certainly captures my feeling about what it means to be a young woman navigating a world and a system that is rigged against you.” Despite the film explicitly exploring the hurdles of young women battling the abortion landscape, the overarching themes of female oppression are extremely relevant to Eliza.

The writer/director told a story about the difficulties in obtaining access to abortion as a metaphor for her struggle navigating the world and the wider film industry. Although the characters and events are entirely constructs of Eliza Hittman’s imagination, her life experiences easily lent themselves to writing them.

The initial idea behind the film came from a newspaper article Hittman read about a pregnant woman in Ireland who was denied an abortion and died. “I draw inspiration from the tragedy that happens in the world that people don’t want to confront.” That said, she delicately sprinkles “discomforting moments of humor” into her narratives to counter the punch.

The film is not a polemic call to action or an advertisement for Planned Parenthood, but rather a more more taciturn inspection of these girls’ emotional journeys.

“Autumn begins in slight denial over what is happening to her body.” Her family and surroundings are unsupportive of her predicament. She naïvely visits an abortion clinic believing it’s a care center, but quickly realizes they have their own anti-abortion agenda.

To further complicate Autumn’s situation, the state of Pennsylvania requires parental approval for minors seeking an abortion; an unnecessary obstruction.

During the development phase of the film, Hittman undertook an extensive amount of fieldwork to ensure that her portrayal of the process was factually correct. “I visited Planned Parenthood in Pennsylvania and New York. I met with various groups, doctors, and social workers.”

“I tried to have a first person experience of what the characters in the story might go through.” Hittman walked around a rural town to get a feel of the world so “I could place Autumn.” Eliza considered where her school might be, and what information and resources she might have access to, in order to create a believable character profile. “I immersed myself in the character’s world so I can tell the story through her eyes.”

Hittman deliberately avoided any discussion about the morality of abortions in her movie. “That conversation is done. It’s in the past.” She was more interested in exploring women’s struggles and the legal and social obstacles they encounter in real life. “It’s told metaphorically through micro-obstacles along her journey.”

The story hinges on the relationship between Autumn and Skylar. It’s a coming of age story for both of them. “Skylar is very respectful of what her cousin is going through, but doesn’t want to pry.” Skylar makes a decision to sacrifice herself to support Autumn knowing that the folks in rural Pennsylvania will eventually find out. While they are traveling to New York, Skylar engages in a wild flirtation with a boy, Jasper (Théodore Pellerin) on the bus. “It’s a transformational moment for Skylar. It’s her coming of age moment. It ages her. For Autumn, it almost the reverse journey, trying to reclaim her youth because she does not want, nor is she ready to become a mother.”

Eliza Hittman struggled to come up with an effective title for the film. Never Rarely Sometime Always are the check box answer options on a questionnaire as part of the intake process at Planned Parenthood. “I believe a good title reveals itself to you during the writing process. You have to wait and be patient to discover it.” The title refers to the answers on the intimate partner sexual history questions on the Planned Parenthood questionnaire. More specifically, these questions refer to consent, coercion, and sexual violence rather than mere preferences. These provocative intimate partner questions transcend pregnancy. “They’re designed to ensure women are in safe and consensual relationships.”

“I heard the repetition of these answers and they rang to me as poetry,” recalled Hittman.

The writer/director’s subtle approach to tell this story stems from Eliza’s subdued demeanor. “It stems from the fact fact that I’m generally an internal and observational person. I respond to cinema that’s about interior spaces.” She also chose this approach to align the audience with the thoughts and characters of the movie. She didn’t want to recreate a “conversational realism.” The screenplay is deliberately sparse and stylistic. This extends into the gentle pacing of rolling hills of the film.

“Even though the story has a soft pace there is still a tension to it,” explained Hittman. A lack of high action draws attention to the underlying simmering drama and controversy in the story coming from Autumn’s desperation.

The writing process was a fluid one for the writer/director. “For me, there is no such thing as a concrete draft. Everything is constantly evolving.” Rather than navigating major turns in the plot or character dynamics, the writer spent considerable time “calibrating tone” in subsequent drafts. “Sometimes you try to push things a little harder and other times you pull back. It’s a matter of finding the right space in which the drama occurs.”

After Autumn eventually obtains her abortion, “I want the audience to feel a moment of relief for her.” Autumn can finally rest. “But of course, we don’t know what she’s going home to.” This is the nature of the slice of life narrative that Eliza Hittman wanted to explore. “Autumn’s life will continue in positive ways. At this moment, her life is at peace.”

Eliza Hittman wants to be regarded as someone who makes “smart, artful narratives about unseen journeys.” She is continually inspired by the new generation of activists who “know their voices, stand up for what they believe, and speak truth to power. I wish my generation was more outspoken and aware.”