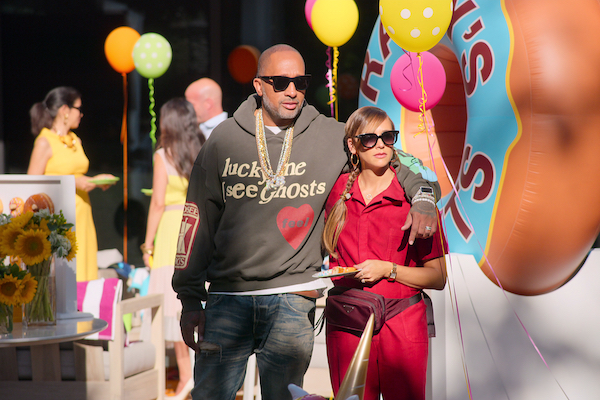 Kenya Barris jokes that he only started writing screenplays because he was a kid with asthma. But in reality, storytelling found Barris because of his love of reading. “The stories and the places writing allowed me to go were so much different than the place I was boxed into. Reading is magic. Being able to do what we do is magic. I knew I wanted to do something in this realm.”

One of Barris’ first jobs was writing for The Keenen Ivory Wayans Show, followed by writing gigs on Soul Food, Girlfriends, Are We There Yet?, and America’s Next Top Model. But, he’s most known for creating Black-ish, Grown-ish, Mixed-ish, and #BlackAF.

On the road to selling Black-ish, Barris wrote and pitched about nineteen different pilot episodes, with no success. “That’s not something I’m proud of,” he joked, “but you learn more from your failures than you do from success. I think Laurence Fishburne is the reason the show got picked up, hands down.”

Barris also gives credit to Anthony Anderson, but said Fishburne helped the network notice the show and Paul “he’s a maverick” Lee decided to take a chance on the series.

After the success of Black-ish, Barris went back and read his pilots that didn’t work before. “It’s so weird,” he said. “There’s one that I went back to and I think I could sell it right now. I’m not Aaron Sorkin, but sometimes writing is a Cool Kids Club. That’s one of the reasons I tried to sell pilots every year because you want to stay on people’s minds in that way.”

“I read a pilot called Urbanity and it was something I really love. It’s about a marketing company that dealt with urban marketing [like] the ones who did the Jay-Z Hewlett-Packard commercial.”

“They were the go-to people when Fortune 500 companies said, ‘We want to talk to the kids.’ That’s the thing a good showrunner does. More than just writing, you understand world building and I think the more pilots you write, the more skills you pick up.”

Barris sees race-related comedies as an oasis of comedy inspiration. “Comedy is medicine, like a spoonful of sugar. But, it also makes you think because you’re laughing, laughing, laughing, until you’re not. Then you think, ‘What was I laughing about?’ and that’s strong.”

In addition to his work on the -ish trilogy, he also tried to gain the rights to the 1619 series from The New York Times because he viewed it as his “Marvel universe of storytelling.” Barris said, “When people say I’m rehashing Black-ish, [it’s like] ‘Yeah, I’m telling my story again.’”

“Most TV writers… if you look at Aaron Sorkin,  just tell their stories. Woody Allen, good or bad, the guy is creatively a genius, but it’s the same story told over and over again. The idea of what it’s like to be black in America cannot be summed up in an episode, a season, or even in a series. There are a lot of stories to mine from that.”

Barris received some criticism for doing multiple episodes on the subject of Juneteenth, but he ignores these criticisms to focus on the things important to him. “People need to understand that this is an important day. If I did another show, I’d do another episode [on Juneteenth]. That’s one of my bucket list things. I want people to see this as a national holiday for all of us, as an American holiday.”

“I think things like that are sometimes missed because [criticism of repeat Juneteenth episodes] is low-hanging fruit. I could do a million different things. I’m not crazy. I choose to do these things because this is the lane I know well.”

Logistically, Barris sees story breaking and idea creation as a combination of individual ideas and TV writers’ room debates (which are actually depicted on screen in #BlackAF). “I just write down crazy moments that I’m going through.”

In one example, Barris said he had the idea for a joke on marriage: “Getting married is like buying a car that the car salesman tells you, ‘Half of these blow up and will scar your whole body, but It’s a really nice car.’” He added, “You still buy the car, but don’t just buy the car. You invite all your friends and family to watch you, knowing there’s a 52 percent chance it’s going to blow up and destroy you.”

“I don’t like to talk about story. I like to just talk. You find the story through conversation. I have areas and worlds I’m interested in and I get the writers talking, then it starts to form itself.”

The mockumentary-style sitcom has taken over thanks to the success of The Office, but it’s important that it’s used to highlight characters rather than be used as a crutch, which is also true of character narration.

In #BlackAF, Kenya Barris is playing a version of himself (somewhat like Larry David on Curb Your Enthusiasm) and the plot comes from his daughter’s submission video for college, which is a mockumentary-style look into his family.

“A lot of writers think narration is cheating. I fucking love narration. Maybe I’m a cheater, but there are ways narration can haunt you.” Barris mentioned Richard Dreyfus’ line in Stand By Me, “I was 12-years-old the first time I saw a dead body.”

“Everybody remembers that line,” he said. “It sticks in your mind forever. I remember the Blade Runner conversations to narrate or not narrate. But, the docu-style allows you to get behind the action. I like pulling the curtain back and explaining things in a way people haven’t heard before, but in a sort of ‘edutainment’ way, but not corny. It fits into the storytelling without feeling contrived.”

Beyond the elements of story, Barris also decided to step into the role and play a version of himself, which is something he hadn’t done before. “There are things like, ‘I fucking hate white people,’ which was a comment I said. I don’t hate white people. Half my writers are white and some relatives are white, but I knew when I said it, on face value how it could be perceived.”

He added, “In that statement, ‘white people’ stood for mainstream America or the box for success. I felt like to say that – to bookend the [pilot] with that – there might be actors who wouldn’t want to say that. I felt like I was prepared to defend that statement. Sometimes those things fall into a bigger conversation piece.”

I don’t like to talk about story. I like to just talk. You find the story through conversation

Barris noted that it’s really just a new version of George Jefferson (in terms of “honky”), which we haven’t seen on television in quite some time. “Let’s go for it and not in an explosive or arbitrary way. Make it all grounded in real feelings that you are ping-ponging back and forth in your head as an African-American man who has had some success while also raising a family. What are those things that I deal with?”

As for stepping into the role, Barris said actors have the hardest job in the world, mainly because they have to leave their personal problems aside from the character, but also because of all the sitting around and waiting.

“Writing for yourself is hard, too. I like it and I think it makes you a better screenwriter, but sometimes it doesn’t sound right coming out of your own mouth. That makes you think about how [dialogue] comes out of other people’s mouths differently. I think every writer should take part in the actor’s process. It changes you.”

All of the -ish shows are on network television, where #BlackAF is Barris’ first deal with Netflix. He joked that not only can you say more on Netflix, but you can also “author your demise.”

Across the board, if you look at all of Barris’ work, it clearly has moved to become more and more authentic, and more and more vulnerable. “It was the notion that some of the best comedy has heart in it. The sweet is not as sweet without the sour.”

He said, “When you have a baby and notice how babies love to suck lemons. It turns their taste buds in a way that they haven’t really ever experienced, but then it makes the lollipop so much sweeter. It’s the same with writing. I think you need that balance of flavor to make people understand what they’re getting.”

In an effort to be authentic, the screenwriter showcased the majority of his real life, which shows how wealthy African Americans are viewed when they have money. “I think that was the main point. We wanted to ground it in reality that this is my real life, but also show this is a dynamic we haven’t seen in black America before.”

Basically, even though the characters have money, they face the same issues of racism and “white gaze.” Barris said, “The same things the Evans faced on Good Times, the Barris’ are facing on this show because there’s a lineage of the trauma to be African-American in this country.”

For the screenwriter, this includes creating flawed black characters. “I think the idea that creating truly flawed characters of color sometimes has its challenges, but I think it’s really important. You want to make sure you’re not creating or propagating a stereotype, and if you are, you need to be coming from a place where you’re saying something about the character. That’s a hard line to walk.”

That said, Barris also wants to expand what he does as a creative person. “My lane will be my lane, in terms of the things I talk about, but as a producer and writer, I do want to take other steps. But you’ll still see the cohesive narrative and the voice of the stories I’m telling, even if it’s a drama. I’m looking to produce a lot of different stories that I wouldn’t talk about, but are on-brand with the worlds I’m trying to create.”

“Because there’s so few of us – black creators – there’s an extra added layer of responsibility to tell a story that’s supposed to somehow magically hit all the marks of perceived ‘blackness’ is and I don’t think there is a true, perceived blackness. That’s part of my journey and part of my mission, which is to expand that definition of what blackness in America is.”