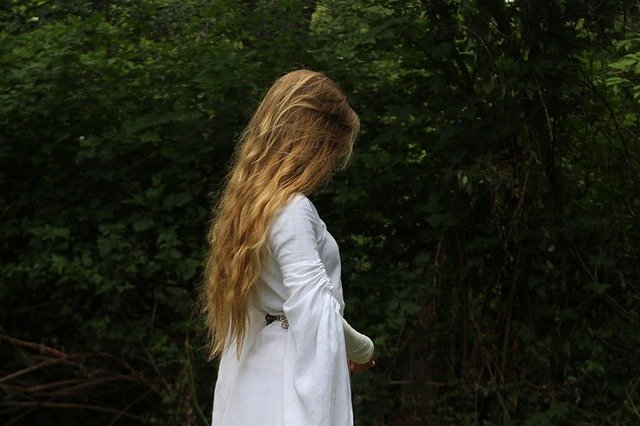 At long last we come to the final of the four major female archetypes – the Maiden.

The Maiden is lamented and resented by some and worshipped and fetishized by others. Traditionally defined as an unmarried woman, she is young, naïve, free-spirited and untainted by the world, the Maiden represents the innocence, independence, and individuality of childhood. She lets her instincts guide her and often experiments creatively in one way or another. She also tends to let life happen to her and often falls into a scenario in which she is powerless and in need of rescue.

She has also become associated with chastity, even though researchers and oral traditions suggest this is a more modern corruption of her original sexual independence, in which she loved freely as she saw fit.

As the proverbial “damsel in distress,” the Maiden often gets the pauper’s share of the action and agency. If she’s not singing in a tower about her would be princely rescuer, she might be asleep waiting for one. She’s the one who is kidnapped, the one who dangles precariously from the bridge, the one who is sold off to a neighboring kingdom to prevent a vicious war. She is both a motivation and an obstacle…for someone else, typically a hypermasculine male hero. Even in her own stories, she runs the risk of becoming a helpless catalyst character, like in Snow White.

In Titanic, Rose is rescued from a volatile fiancé and a suicide/accidental death by Jack, who opens her up to experiences that transform her life even after his untimely death.

In Sam Raimi’s Spider-Man, Mary Jane Watson is put in mortal jeopardy to test the moral fortitude of the titular character.

In Maleficent, Aurora is cursed to prick her finger on a spindle and sleep for a hundred years even though it is her parents who insulted and maimed the fairy that cursed her.

Damsels in Distress have become an enduring cliché. We need only think back to the silent film era, that classic image of a villain tying a helpless Maiden to the train tracks as the locomotive bears down on her, to realize how iconic yet overused it has become.

In Tangled, the Disney Rapunzel remix, Rapunzel may be the Maiden in the tower, kidnapped by a selfish witch, but she forges her own path by blackmailing a ne’er do well thief into taking her on an adventure. She’s still a Maiden when she walks into a bar full of potential scoundrels and dances in the streets of her long-lost kingdom, and she’s still a Maiden when she promises the witch her undying obedience to save the thief’s life.

In The Lord of the Rings, Aragorn’s elven lover Arwen is honorable and pure of heart. She sacrifices her immortality to live with the man she loves and then jeopardizes her life to save Frodo from the Nazgûl. Her name in Sindarin even means “noble maiden.”

In 2020 thriller Run, Chloe embodies the Maiden as a cloistered, wheelchair-bound teenager seemingly doomed to live locked away in her mother’s home… until she decides enough is enough.

These are just a few examples of the potential depth and breadth possible within the Maiden archetype. Yet in all of them, including the earlier examples of the more traditional use of the archetype, we can see a pattern emerging for the arc that often ends up defining this character.

A Maiden’s journey often takes her from uncorrupted and inexperienced to self-aware and more worldly. Just like any good character, she grows throughout the course of the story, absorbing experiences that allow her to be less vulnerable to mistreatment in the future. However, because her entire archetypal identity is bound up in the notion that simply learning something can have profound ramifications on her life and the lives of those around her, we can earn a lot of audience satisfaction through what she learns, no matter how big or small her journey is. Even if she still has to be rescued in the end.

At one end of that spectrum, we have An Education, in which Jenny almost gives up her future and independence to marry a man she eventually discovers is already married. In the aftermath, she returns to her path a little bit wiser to the wiles of men.

And at the other end of the spectrum, we have The Silence of the Lambs. Clarice begins the story as an untested FBI recruit sent to interview a serial killer simply because her instructor believes Hannibal won’t suspect her of trying to exploit him due to her inexperience and naivety. By the end, it is Clarice who has won the respect of the vicious doctor and her colleagues. It is she who enters the dark dungeon to save the damsel in distress. More uniquely, even Katherine, the film’s well-kept damsel, turns the tide in her favor by rigging a trap for the killer’s dog, protecting her from further abuse until she can be rescued.

Jordan Trippeer is a produced writer who has worked on projects for James Franco and Indigenous Media, distributed by Amazon and Netflix. As a Nicholl finalist, Universal Fellowship Finalist, and PROJECT HER filmmaker, her TV and film work has focused on underdogs, outsiders, and everymen confronting the extraordinary, fantastical, and heartrending in their grounded lives. She also serves as part of the development team at the International Screenwriters Association.