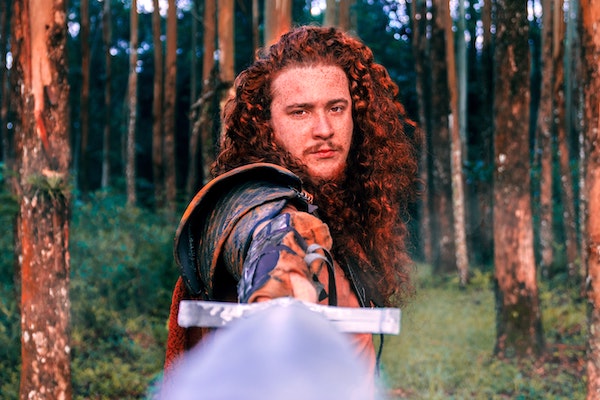 Male characters are far more complex than they are typically portrayed in film and television. Are you a fighter or a lover? It’s overly simplistic to portray masculine characters in such a binary fashion since most men possess a hybrid of many character traits. Nonetheless, it’s helpful to categorize male characters by their prevailing traits according to Jungian archetypes.

A comprehensive look at mythological male archetypes will help screenwriters write richer and more layered male characters. These primordial masculine archetypes are believed to exist at the deepest subconscious level.

There are four main male archetypes we’ll discuss in a series of articles:

We’ll explore these powerful masculine archetypes in a series of articles starting with the Warrior.

This archetype is the most common portraying the strength of the male – physical and mental. Warriors are fighters associated with both positive and negative characters. They are binary aggressors by nature. This might mean they’ll use brute force to fight to the death, to either satisfy their egos, or to protect their communities. They use their force for good or bad.

Good warriors take full responsibility for their actions and choices. They use their strength wisely and appropriately. But when they are sufficiently provoked or their community is under imminent threat, they will unleash their full power in all its fury. They often fight for a cause or an ideal bigger than themselves.

Warriors don’t always have to be engaged in physical battle. Any conflict, violent or non-violent, are found in warriors.

These archetypes are never complacent because they are always watching, observing, studying, and calculating situations and their environments. They don’t look for short cuts or quick exits when things get rough. They endure the struggle knowing that it might yield a positive outcome in the end. The worth of a captain can only be seen during a storm.

Despite their strength, warriors are aware of the limits of their physical limits which allow them to accurately assess risks. They are also acutely cognizant of the inevitability of their own death – actual of metaphorical – end of social status or end of life.

Warrior stories frequently explore the interactions of generational masculinity either through fathers and their sons, or men and their mentee boys in their clans.

Warrior archetypes are often interpreted as metaphors for God. The great protectors of humanity in the sky that are both loving and vengeful should we upset or disobey them. Through their firm but fair guiding hands, they can appear to be aloof and unavailable to their sons or younger men. This gives rise to stories of sons overthrowing or killing their fathers to supplant their leadership roles. This is typically in response to them receiving the anger and wrath of their fathers instead of their love.

By overthrowing their fathers who have become old, decrepit, ineffective, harsh, or corrupt, the sons can restore peace and fairness to their communities.

The sons of the good warrior fathers are well-regarded when they step down from power or pass on. They become vehicles for their attributes, knowledge, and wisdom.

Warriors succeed by virtue of their courage, flexibility, and adaptability. They are decisive and make fast and firm decisions with the information they have available. They don’t dawdle.

If they fail to overcome one obstacle, they rapidly change course. Despite their overt displays of anger and violence, they remain level-headed during times of crisis. Setbacks are considered par for the course. They are tests of their character.

These men are highly-disciplined. They regularly train for war, their professions, or any personal pursuit that leads them to their best selves through habit and determination.

Warriors temper their emotions to achieve clarity of mind. They possess them in abundance, but they know when to mask them to tackle the task at hand. Warriors know that emotion during times of stress cause missteps. Removal of excessive emotion during crises leads to greater self-confidence. Emotional detachment allows warriors to ignore the opinions of others and the limitations these opinions carry.

Fear is both their enemy and their friend. Many warriors routinely choose to undertake a dangerous mission or face their internal fears head-on to build their character. Attacks allow warriors to build their resiliency.

Warriors know themselves – both body and soul. They have a core set of values they live by. They are undeterred. This doesn’t mean they are rigid in every belief they hold. If the situation warrants it, they will change their minds accordingly.

They are divided into creative destroyers which destroy the old and replace it with something new and better. Lords of destruction are as ominous as their names suggest. They are nihilistic, scorched earth types, often seen in gangster films. They are associated with greed, wealth, and power. However, they also represent renewal and rebirth.

The warrior archetype is often counter-balanced with certain traits including wisdom and intuition.

Warrior archetypes also have a dark side known as their Shadows. These are broadly defined as sadists and masochists which represent the inverse of a group of warrior behaviors – emotional detachment, loathing of weakness and failure, cruelty, pushing their boundaries beyond reasonably achievable limits, and demand absolute loyalty and authority. Sadists outwardly project their shadow warrior energies onto others while masochists project them onto themselves.

Read the other male character archetypes in our series – Lover, Magician, and King.