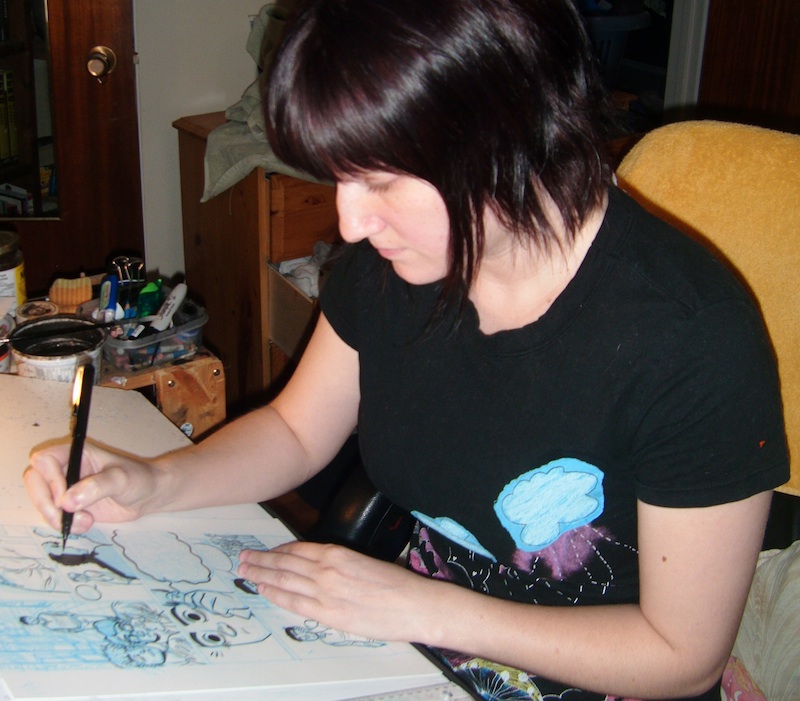 Artist Faith Erin Hicks, born in British Columbia and currently residing in Halifax, Nova Scotia, began her creative life in animation, but soon moved on to comics with her webcomic, Demonology 101. This is how Hicks garnered her first fans, but soon these online comics attracted the attention of publishers. “Basically, I made a lot of comics, put them online and eventually made good enough comics that publishers noticed and offered to pay me to make even more comics. Which was very awesome of them.” She went on to publish books like Zombies Calling, and is the artist for other writers like Susan Kim and Laurence Klaven with Brain Camp and J. Torres with Bigfoot Boy.

In 2012 Hicks published the young-adult graphic novel Friends with Boys, which made the Young Adult Library Association’s list of Great Graphic Novels in 2013. In this story, Maggie, who has been home schooled her entire life, joins her three older brothers in public high school. This would be harsh enough, needing to find friends and learn how to socialize—though she starts to find a place with Alistair and Lucy, another pair of outcasts—but Maggie’s also dealing with a mother who recently decided to up and leave the family. To top it all off, there’s a centuries-old ghost, the widow of a captain who was lost at sea, who refuses to leave Maggie alone.

Though eventually published through First Second, Friends with Boys had a false start with another publisher. “Friends with Boys was originally a pitch for DC Comics’ Minx imprint,” explains Hicks. “It was an imprint they created to publish comics for girls, and it folded after about a year. I was approached by Shelly Bond, who oversaw the imprint, and we worked together on a pitch which became the proto-Friends with Boys. The actual Friends with Boys ended up being quite different, but the main set up of home schooled girl with three brothers and a ghost was all part of that original Minx pitch. Anyway, Minx folded before Friends with Boys became anything more than a pitch, but it meant I had all this artwork and the beginning of a story lying around. I spent some time revising the pitch and my agent suggested we pitch it to First Second, and much to my shock and delight, they bought it. Now it’s five years later and I make comics full time.”

Page from Nothing Can Possibly Go Wrong

Many of the main aspects of Friends with Boys mirror Hicks’ own life: she also has three brothers, was home schooled until high school, and had a parent who, for a time, left. While it was partly intentional for this project, Hicks admits that sometimes aspects of her life work their way into her stories. “Well, I’ve come to the perhaps unfortunate conclusion that all my comics are personal on some level. Maybe it’s not intentional, like when I made The Adventures of Superhero Girl, [a serial comic about a 20-something trying to make a living at her dream job, superheroing] which was supposed to be my own take on superhero comics, and I think it succeeds as that, but it’s also pretty much me in my early twenties, dealing with a really crappy post-college pseudo-adulthood. I tend to think most creators make stories that reflect them personally in some way. Or I do, at least. Even if it’s not about my life on the surface, there’s usually some story quirk that’s very much a reflection of my life at the time.”

With her solo projects, Hicks is quick to thank the people that help her bring a comic to completion, like her editors and agent. “I work closely with my editor whenever I’m doing a project that will become a book,” says Hicks. “We go back and forth about the writing and art, until we’re both happy with it. I like working with editors and value their input. My agent is usually there at the beginning of a project, helping to find it the right publishing home, and then she’ll support me through its duration, and make sure I get paid, which is great, because I’m terrible at the business end of things. I’d probably starve if it wasn’t for my agent.” And though she’s wary about sharing work with peers, she has opened up to asking for input: “Friends can be a good sounding board,” she admits, “but I sometimes feel like it’s self-absorbed to try and inflict your stories on your friends. Fortunately I now have friends that make their own stories, so we can go back and forth on them, and it’s pretty awesome.”

Hicks doesn’t just work on her own projects, though—she also creates the art for comics written by others. “I usually have less freedom when I’m drawing someone else’s script (like Brain Camp),” Hicks notes, “because everything is dictated to me, right down to the page layout.” But, she also adds, “That’s not a bad thing, though. When I draw someone else’s script, I’m getting the chance to make a story I wouldn’t have thought up myself, so I enjoy it. I like to trade off, do one project all my own, then work with someone else, then switch back to my own stuff. I write as well as draw, so I don’t ever want to just be an artist and only draw other people’s scripts, but I like doing it when I’m sick of my own stories—which happens, on occasion.”

One of Hicks’ most recent projects, Nothing Can Possibly Go Wrong, is another collaborative piece, but Hicks’ process for creating this comic was a little different. Written by Prudence Shen, Nothing Can Possibly Go Wrong is another young-adult title, this time following Charlie and Nate, two boys who don’t even realize they’re each other’s best friend. When the school budget falls short, Nate decides to run for class president in order to send the limited money to his robotics club, but the head cheerleader (and Charlie’s ex-girlfriend) doesn’t want to lose her new uniforms, so she forces Charlie to run as well. Things quickly spiral out of control, and both parties are forced to drop out. That’s when Nate comes up with a back up plan that could save everyone—enter a battle-robot competition—and use the prize money for both clubs.

Shen originally wrote and pitched this story as a prose novel, but then it was picked up by First Second and given to Hicks to be turned into a graphic novel. This involved cutting, simplifying, and rearranging scenes in order to turn the novel into a comic, a lengthy process which Hicks detailed for her fans on the Nothing Can Possibly Go Wrong website (http://www.nothingcanpossiblygowrong.com/comic/page-235-236/). While there was quite a bit of alteration and slimming down in order to keep the graphic novel from reaching too obscene of a length, Hicks makes it clear that she and Shen did not work very closely on this project. “[Shen] saw the outline and script when I finished them and gave input on them, but I was mostly left to my own devices. We did write one scene towards the end of the book together (the one where Team Awesome meets the Robot Rumble bullies), because I needed to drastically change it from the scene in the book, but that was the only one we collaborated directly on.” Shen had come up with the story, it was up to Hicks to adapt it into a graphic novel.

After getting the plot down to a workable size, Hicks began the same process she has for every comic she scripts. “I usually spend a lot of time nailing down the story outline and figuring out where the emotional beats go, then I do a rough pass at the graphic novel, drawing and writing all of it in thumbnail form on a few spiral notebooks,” Hicks explains. “Some cartoonists just start with a script, but I have to thumbnail my comics out while I’m writing the script, so I can figure out the pacing. It’s a nice way to make sure the art and writing are developing in lockstep. Then I go and type up that rough handwritten script, editing it as I go. I guess it’s about three drafts before I reach something to hand in to my editor, but each draft has a different shape: outline, thumbnails, then typed script.”

Adapting prose into a graphic novel is rife with traps that make the process easier for the artist, but diminish the quality of the book, like the tendency for the artist to rely too much on the available narration and seemingly not have enough faith in the art to convey action and emotion. But Hicks went into the project aware of the pitfalls, bemoaning other artists’ mistake of over-using narration: “You need to be able to take the words from the original novel and transfer them visually to the page. I’m always very concerned with that. It’s pretty much the most important part of my job, and at this point I’m pretty comfortable with taking words and translating them visually. Prudence’s novel was very action-y and had a lot of dialogue, so on many levels it was perfect to convert into comics. Some stuff was lost, simply due to the length (Pru’s novel was probably 300+ pages, the comic is 280 pages), but I think the essence of the book translated well into the graphic novel.”

Generating emotion through images, rather than text, is certainly a strong suit for Hicks, who fills her books with scenes low on dialogue but full of emotion. In Friends with Boys, Maggie vents about her missing mother, then refuses to be comforted about it, pushing her father’s hand away. It’s no easy task showing those complicated inner moments visually, but Hicks figures a way to get in her characters’ heads. “For the most part it’s about empathy, and putting yourself in this character’s shoes, and then trying to draw that emotion,” Hicks

Page from Faith Hicks’ Nothing Can Possibly Go Wrong

says. “I like drawing emotional scenes, moments where characters are struggling with internal conflict or emotions running under the surface, it’s just something that really interests me. I’m not a huge TV watcher, but I’m fascinated by a few shows, character-based shows like LOST or Breaking Bad, where you have characters dealing with charged emotional moments and reacting to them in unpredictable ways. I like studying how actors work those charged scenes, what they do with their faces and body language, and I try to put that down on the comic page. Honestly, I think the best thing you can do to improve your comic making, especially in terms of drawing people interacting, is just be interested in observing people and their behavior.” Hicks still has aspects of her craft that she struggles with—“I’m not a technically skilled artist; it’s very difficult for me to draw non-organic things like machinery or, well, robots. Drawing the robots was really, really hard.” But she has fun with those parts as well, creating some excellent robot battle scenes in Nothing Can Possibly Go Wrong that are just as detailed, emotive and entertaining as anything else Hicks creates.

Angela Sylvia holds an MFA in Creative Writing from Lesley University. She also reviews anime and comics for the Fandom Post.