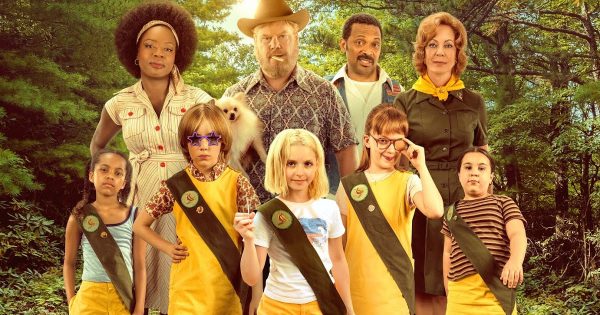 “Fear Not, There Is A Place For You” Lucy Alibar on ‘Troop Zero’ & ‘Beasts of the Southern Wild’

“You don’t realize how unique your childhood was until you’re out of it,” proclaimed screenwriter Lucy Alibar. “Universality is assumed, which is one of the magical things about childhood.” The world is your oyster and dreaming of flying into space is realistic.

As an adult, Alibar started writing scenes based on her life from ages 7 to 11, which eventually led to a short play, involving two grown women playing children (to avoid child actor labor law complications in New York).

Once she gained some traction with her playwriting, she met with as many people as possible to consider turning her plays into a movie. In 2012, she sold the screenplay for Beasts of the Southern Wild, as a co-writer, which was based on the play Juicy and Delicious.

Her latest film Troop Zero on Amazon stars McKenna Grace as Christmas Flint, Viola Davis as Miss Rayleen, Jim Gaffigan as Ramsay Flint, and Allison Janney as Miss Massey. Directed by Bert & Bertie, the movie is based on the 2010 play from Alibar Christmas and Jubilee Behold the Meteor Shower. Troop Zero is set in 1977 Georgia a centers on a motley crew of Birdie Scouts competing for their chance to be recorded on NASA’s Golden Record.

We asked Lucy Alibar about the final title which bears no relation to the original title of the play. “I think one of my biggest learning curves in writing films is that you need a title that people can remember and not hard to say. Even Beasts of the Southern Wild was a leap. The title needs to be  provocative, but poetic,” she added.

When writing for child actors, Alibar’s main concern was getting to know the children, their cadence, and how to best connect with how they normally speak. “You don’t want to write things no child that age would actually say,” she stated. It was also important for each child character to have their own speaking voice.

“You have to believe [the dialogue] comes from the child and it’s within their reality. Milan Ray (Hell-No Price) had never been in a movie before. There are lines of dialogue in the movie that were too adult, too heightened, so we had to do a little rewriting.”

Since the play was originally written for adults playing children, some of these original lines could work, but didn’t feel realistic when actual children were saying them. “I needed to pull it back and make it more honest.”

Troop Zero is more than a group of girl scouts making history. Thinking about NASA’s Golden Record (a real, historic event), she asked herself about legacy, who writes history, and “what parts of us could be made permanent?” Then, “What would people never know about us  if everything ended tomorrow?”

It was also pivotal that Troop Zero was set in a small town. “It was exciting for me to think about people in this tiny community… thinking that they too were important even though no one had ever heard of them. So many people feel they don’t have a voice. I think a lot of people think no one cares about them, all over the world. Their own sense of importance excited me.”

“Christmas Flint is the giant eyeball of the film. The idea is that you’re watching this movie and seeing her tell the story as she remembers it, but if you cast Viola Davis in anything, she’s going to have a huge arc. The same is true for Allison Janney.”

The screenwriter said she had films like Gulliver’s Travels in mind while thinking about Troop Zero, or even The Dirty Dozen, where there is somewhat of a main character, where the protagonist is meeting a variety of interesting characters along the way, all of which have the capability of stealing the show. This is certainly the case with Christmas Flint in Troop Zero.

“I wanted to write a big ensemble movie that aren’t made as much these days because of the economy of the industry. I love those movies and whenever they come on, I’m glued to my couch. You focus on 1-2 people, but it’s so satisfying to see the other rich characters with their own arcs.”

In addition to the character arc, Alibar also focused on the theme or idea that “you never really know someone.” She mused, “there are so many people in our culture, which is focused on public shaming, but you never know somebody’s inner journey or their true potential.”

In the film, she wanted to make sure that all of these characters were surprising and capable because they had support from adults who cared. “We’re seeing so many people villainized today. Childhood is a very judgmental time, it’s appearance focused, where difference is mercifully targeted. There’s a lot of work needed to combat that, but it’s still a part of childhood.”

Lucy Alibar draws upon her Southern roots to explore the idea of being different. Christmas Flint dreams of going to outer space. That’s about as different as a character can be in Troop Zero.

Between her two films, the screenwriter spent some time on the craft of writing, citing books like The Anatomy of Story of John Truby as a favorite resource.

“I love a lot of screenplays that people don’t like. Some people don’t get what all is in the screenplay. All is Lost (2013) is one of the best screenplays that I’ve ever read. That movie got a lot less attention than it should. The same goes for scripts by Jim Jarmusch (Dead Man, Paterson, Coffee and Cigarettes). I know it’s great when I’m riveted.”

As a storyteller, she carries stories with her for an extended time before writing the first page – until they’re completely visual in her mind. “To me, you have to be able to watch a film with the sound off and still be riveted. Then, when the characters speak in your head, write that down.”

Like most screenwriters, Lucy Alibar writes multiple drafts of every screenplay. “At first, I don’t try to make it understandable to anybody but me. If you feel the character in your heart with the first pass, write it down. Then, take notes, take critique, then make it for an audience.” When Alibar finishes a script, she thinks back on her main goal, which is to have the audience walk out with “an awakened curiosity for each other.”

Writing in a manner perhaps best described as “childlike wonder,” Alibar continues to focus on this major goal with her work. Remembering that her favorite line from Romeo and Juliet came from Friar Lawrence, she quoted, “Hence from Verona art thou banished. Be patient, for the world is broad and wide.”