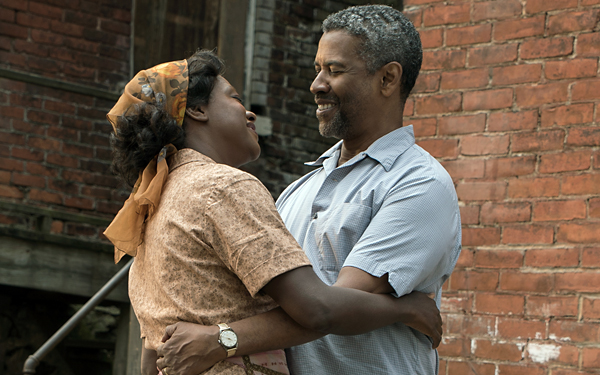 “The star of the movie is the screenplay.” August Wilson’s Fences

However, this year’s Oscar nomination for playwright August Wilson for the screenplay of Fences, an adaptation of his Pulitzer Prize-winning play, came under unique circumstances – Wilson passed away in 2005, meaning that the nomination comes nearly twelve years after his death, and long before the film, which was directed by and stars Denzel Washington, went into production.

Among Wilson’s many celebrated works, his 1983 play Fences is his most acclaimed and most popular. During its 1987 Broadway run it won both the Pulitzer Prize for Drama and four Tony Awards, including Best Play.

Fences focuses on Troy Maxson, a 53 year-old former Negro Leagues baseball player who provides for his family by working as a garbage man in Pittsburgh. He comes into conflict with his teenage son, Cory, who has been offered a college football scholarship. Troy struggles with what he believes is best for Cory’s future, and decisions he makes for his own future that lead him to be at odds with his otherwise supportive wife, Rose.

Wilson’s stark depiction of the hard decisions faced by an African American family prior to the Civil Rights Movement has made Fences an enduring favorite with critics and audiences, and the play is widely taught in American colleges.

Paramount Pictures originally optioned the play in 1987 as a potential vehicle for Eddie Murphy to portray Cory. Wilson wrote the screenplay himself, and he was very vocal in his belief that only a black director could capture the right tone for the film.

Paramount was under no legal obligation to fulfill Wilson’s request, but the studio ultimately respected his wishes. Unfortunately, over the next two decades, attempts to mount the project by black directors led to a series of unsuccessful starts. When Wilson died of liver cancer at the age of 60 in 2005, Fences had only inched closer to completion in that producer Scott Rudin had got involved with the project, and Wilson had continued to revise the screenplay over the years.

In many aspects, Rudin was the right producer for the job. An Oscar, Emmy and Tony Award-winner, his professional life has bridged Broadway and Hollywood for decades.

Rudin produced the 2004 remake of The Manchurian Candidate, which starred Oscar-winning actor Denzel Washington. A few years later, Rudin approached Washington with Wilson’s screenplay and asked him if he was interested in starring in it.

Washington was, but he wanted to perform the play first before committing. This led to the monumentally successful revival of Fences on Broadway in 2010, starring Washington and Viola Davis. Both Washington and Davis won Tony Awards for their roles, and Rudin was one of the producers to receive the Tony Award for Best Revival of a Play.

After finishing The Magnificent Seven, Washington finally decided to direct and star in the film version of Fences, and brought in Todd Black, a producer who has worked with Washington on several films starting with 2002’s Antwone Fisher.

Clearly we were unable to interview Wilson about his screenplay. Instead, then, Creative Screenwriting spoke with Todd Black, who discussed how this adaptation finally made it to screen after nearly three decades, and how devoted the creative team was to preserving Wilson’s vision.

“We were in Baton Rouge shooting The Magnificent Seven in 124 degree heat,” Black recalls of Washington; “and he said to me, ‘You know, I think I’m ready to do Fences next. What do you think?’ I said, “I don’t think you could find a more well-written screenplay to direct or act in right now.’ He agreed, so we called up Scott, who was thrilled, and then we called Paramount, who were also thrilled.”

With Washington and Rudin also came the primary cast from the 2010 Broadway revival – Davis, Stephen McKinley Henderson (Bono), Russell Hornsby (Lyons), and Mykelti Williamson (Gabe), with only the younger roles being recast for the film.

Even though Wilson had completed work on the screenplay prior to his death, Washington’s familiarity with the play caused the production team to revaluate some of Wilson’s choices in adapting the screenplay.

While the dialogue in Wilson’s Fences screenplay comes largely verbatim from the play, Wilson trimmed several lines, particularly in the final scene. Washington wanted the dialogue of the screenplay to be an even closer match to the lines he had recited on stage in 2010, so many of the cut lines were reinserted into the screenplay.

Black explains, “Right after we wrapped on Magnificent Seven, we returned to Los Angeles and set up shop in Paramount to really get into planning the shoot and making sure the script that August had written was as close to the play as Denzel wanted. We laid the play and the screenplay on the table, and day by day we meticulously would go through the process of comparing lines of dialogue and punctuation.

“Denzel knew the play backwards and forwards, and he said it was literally music to him. If there was even a period, question mark, or apostrophe that August had put in the screenplay that wasn’t in the play, it threw Denzel off.”

The process of “reconstructing” the screenplay from the play was intricate, but Black believes it provided deeper insight into the material. He recalls, “We literally had to do a lot of microscopic surgery to make sure that everything matched up. It was wonderful, brilliant, and painstaking at times to get inside August’s and Denzel’s heads with the screenplay versus the play.”

Because of Wilson’s regard as a writer and the high position Fences holds in the canon of American theater, Washington stressed fidelity to Wilson’s words in every aspect of the production.

“The star of the movie is the screenplay and August Wilson’s words,” Black says. “What Denzel said to me, to Scott, to all the actors, the cinematographer, and the production designer was, ‘Don’t make any decision without August Wilson’s words leading you to make that decision.’ Whatever you do, let the words inform your decision first. That’s what we all had to abide by.”

While the play takes place entirely in the front yard of the Maxson’s home, the screenplay gave Wilson the opportunity to incorporate more of the Maxson’s world into the story. For example, Wilson’s screenplay moves the primary location to the Maxson’s backyard and sets several scenes in the Pittsburgh Hill District community where the characters live.

Black notes that Wilson’s decision to open the play up in terms of setting allowed them the freedom to visit other locations in the characters’ lives.

“There were lots of visual decisions to make. We shot in the Hill District of Pittsburgh because that’s where August set it in. Again, the script informed the location. The screenplay told us where to open it up, like in the scene where Bono meets Troy at Taylor’s Bar. The opening scene shows them at work, and it was fine because they were talking about work and we were able to show where they actually worked as opposed to keeping it in the backyard.

“The decisions on where to open it up were tough decisions to make, that August had to struggle with and then Denzel had to struggle with. It was tough at times because maybe it would’ve been less expensive to do it differently, but more than anything else I’ve ever worked, on the screenplay informed pretty much every decision we were making, tough or otherwise.”

The ultimate goal of the production team was to ensure that they were doing justice to Wilson’s work, particularly because Wilson was careful to follow his original play closely in his screenplay adaptation.

Black says, “As Denzel will tell you, there are five or six American playwrights, such as August Wilson, Tennessee Williams, Arthur Miller, and Eugene O’Neill, whose storylines and subject matters just cannot be messed with. I think August is America’s Shakespeare. The words and the stories are so strong that you don’t have to create something that wasn’t there. You can just let the dialogue, characters, and storyline lead you on screen or on stage beautifully. You don’t have to change that much with whatever form you’re doing it in.”

Because of the regard the creative team had for Wilson’s work, when Oscar nominations were announced, Wilson’s posthumous nomination for Best Adapted Screenplay carried special significance.

“I think I screamed louder about that one than I did for the Best Picture nomination,” Black recalls. “I think we all did. I know Denzel and Viola did, and I certainly know August’s widow Constanza did as well. Stephen McKinley Henderson was very good friends with August, so I know he did. That one was such a satisfying nomination because I don’t think there’s a stronger adapted screenplay in content and emotion than August’s screenplay.”

Reflecting on the process of finally bringing Wilson’s Fences from the stage to cinemas, Black looks at the film as one of the most rewarding experiences of his career.

“August Wilson is in a class by himself,” he says. “I wish every writer had a little bit of August Wilson in them. Some of the screenwriters I’ve worked with are enormously talented, but you get very, very spoiled when you get to work with platinum. Very rarely do we get to work with platinum! I feel very blessed. If I ever get to be involved in something halfway this good again, I will be thrilled.”