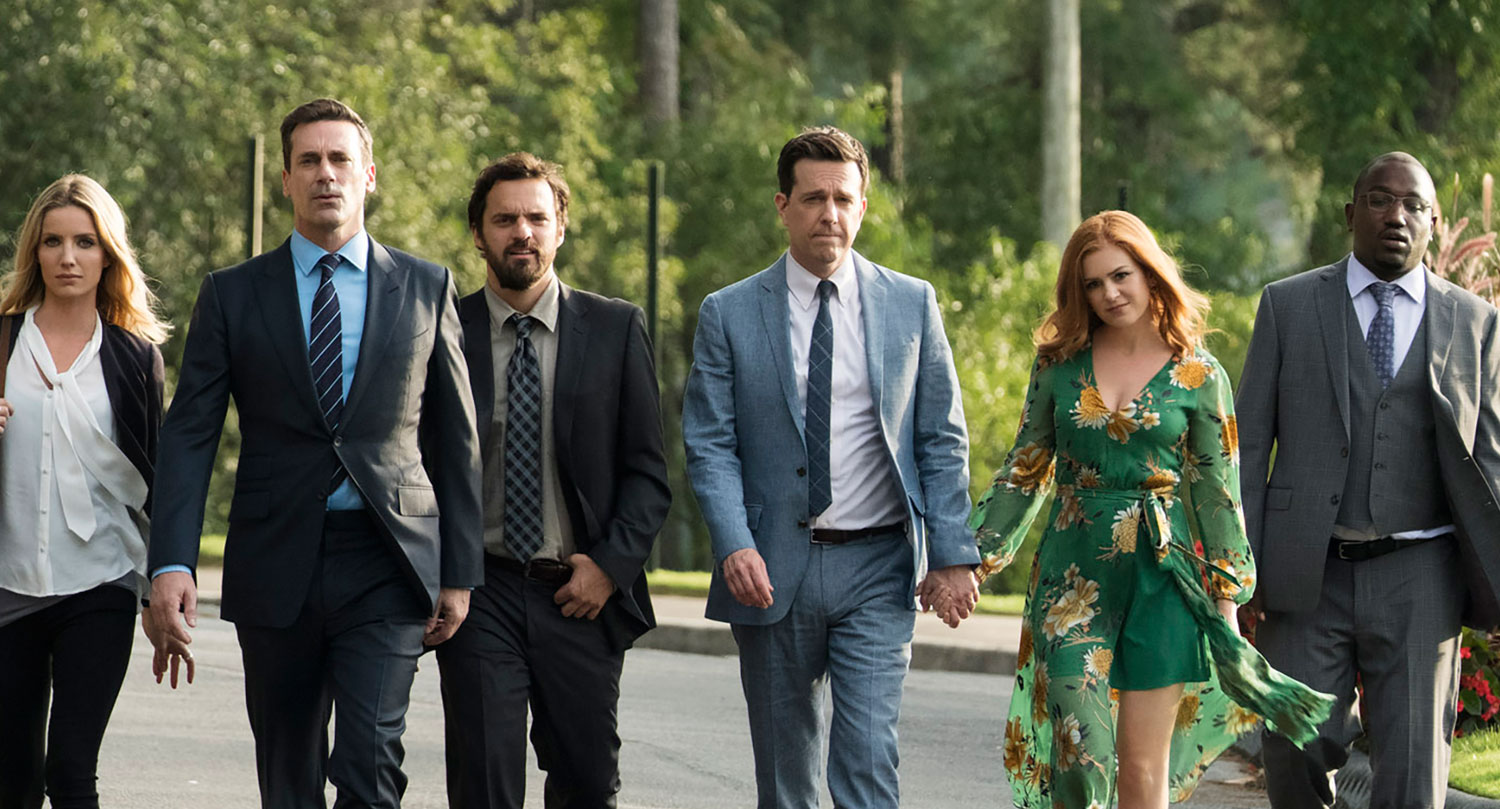 The ensemble comedy has become all too rare in the movie world. The more characters that there are in a story, the harder it is for such numbers to register and earn laughs. Thus, most comedies tend to be star vehicles focusing on one or two comic players. Some that have attempted to create a comic ensemble, like the recent “Ocean’s 8”, struggled mightily to make everyone funny. “Tag”, which just opened, doesn’t have that problem. The characters are vividly written and played by expert comedians who know how to wring every last drop of funny out of each scene. And it sustains its smart humor from the first moment to the last.

The story of “Tag” is based on a 2013 Wall Street Journal article that told of a group of childhood friends who continued to play the game for decades, well into middle age. As each year passed, the game became more and more of a spectacle, one that played out shamelessly in public, with higher and higher stakes each time. Their intrepid game knew no bounds, disrupting work, social events, and even weddings. The obsessed participants of the game spared no expense to compete, traveling across continents, creating elaborate traps, and pulling out all the stops to ensure they weren’t the last one tagged.

The movie brings a lot of the real-life shenanigans to life, albeit with fictional characters. Hoagie (Ed Helms) is a successful dentist, businessman Bob (Jon Hamm) owns his own Fortune 800 company, and Jerry (Jeremy Renner) is a personal trainer who runs his own gym. The other two players aren’t quite as successful in their adult lives. Stoner Chilli (Jake Johnson) is between jobs, frittering away his days in a marijuana haze, while Sable (Hannibal Burgess) struggles with a mid-life crisis which leads him to second-guess all he does.

Jerry, the aging jock, is the undisputed champ of the game, having never been tagged in the 30 plus years they’ve been chasing after one another. That’s why Hoagie has decided that this year, the others must all join together to take down Jerry and tag him once and for all. The perfect opportunity arises when they find out that Jerry’s getting married in their old hometown. Soon Hoagie has gathered up the others to start planning the champ’s demise. They leave their lives behind and head home, where they will attempt to tag him at the local bar, a rehearsal dinner, on a golf course, and of course, Jerry’s actual wedding.

The script could have been content with merely lampooning these maladjusted man-children, yet writers Mark Steilen and Rob McKittrick are after much, much more. Sure, the theme of immaturity runs throughout the film as avidly as the characters chase after Jerry, but the players exude a lot of complexity in their pursuits. Hoagie is an insecure nerd who still is mad he was never cool in school. He may have a spitfire wife in Anna (Isla Fisher), but he’s never fully shaken his timid inner child. Bob is a titan of industry, full of hubris, but his vanity prevents him from seeing that the Wall Street Journal reporter (Annabelle Wallis) he’s invited to traipse after him while he plays tag is hoping to write a take-down piece. The perpetually baked Chilli perceives a lot more than one would think, and the insecure Sable has the most steadfast moral code. These are three-dimensional characters that never stop surprising us.

Jerry, of all the competitors, is the one least willing to regard tag as a mere game. He’s deadly serious when he plays, employing skills that are half Ninja, half school bully. It’s a great inside joke that Renner, one of the original Avengers for Marvel, is again playing such a larger-than-life champion here. And as the others come at him, we hear Jerry’s thought-process as he strategizes precisely how he’ll take the others out. His voice-over narration plays similarly to that of Robert Downey, Jr. as “Sherlock Holmes” when he foreshadowed his every fighting move in those action-oriented Guy Ritchie films. It worked like gangbusters there, and it works spectacularly here too.

For such scenes, director Jeff Tomsic employs slow-motion to enable the through-lines of the action to register clearly. It makes the silliness of the stunts all the funnier, especially since Hamm, Helms, and the rest throw themselves into the ridiculousness of their character’s efforts whole-hog. The slow-mo scenes also showcase just how skilled Jerry is at playing tag, as well as how much fun Renner is having in his farcical role. He seems a long, long way from “Dahmer” and “The Hurt Locker” here.

Secondary characters shine too, giving the likes of Leslie Bibb, Rashida Jones, Nora Dunn and Steve Berg a lot of screen time to build their characters and earn guffaws. Bibb shines especially bright as Jerry’s fiancée, a woman who’s a worthy equal to the sly man she’s about to marry. The film also exudes a surprising amount of black comedy as it boldly satirizes male worries about penis size, the sanctity of Alcoholics Anonymous meetings, and even such taboos as miscarriages and cancer.

The conceit of a game of tag could have easily run out of steam before the final credits, but this movie keeps it going with fervor due to its strong characters, adroit physical comedy, and shrewd lessons about putting away childish things. “Tag” is a summer movie that can easily be mentioned in the same breath as other inspired ensemble comedies like “It’s a Mad, Mad, Mad, Mad World”, “A Fish Called Wanda”, and “Tropic Thunder.” Yet, this one never lets its characters become too cartoonish. Their game may be childish, but those playing it here are recognizable adults. All that makes this one of the nicest surprises of the 2018 movie year. One of the funniest too.