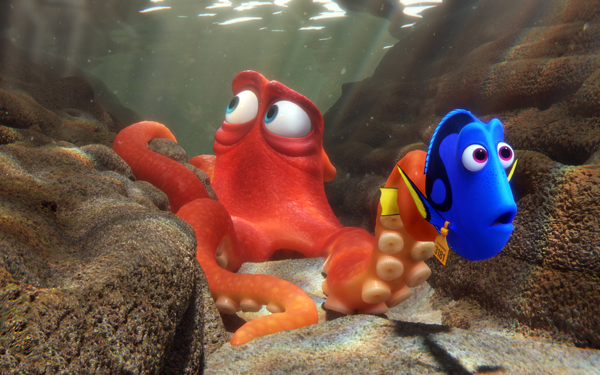 A sequel to Finding Nemo was an obvious move from a business standpoint, and Disney began preproduction on a sequel (without Pixar) as early as 2005 that was eventually abandoned when Disney bought Pixar in 2006. Nonetheless, Finding Nemo creator Andrew Stanton didn’t begin work on the sequel until six years later. Early in the production process he selected Victoria Strouse to write the screenplay for the long-awaited sequel.

In Finding Dory, the beloved blue tang Dory (Ellen DeGeneres) begins recalling fragments of her earlier life, including her memories of long-lost parents. Despite her issues with her short-term memory, Dory enlists friends Marlin (Albert Brooks) and Nemo (Hayden Rolence) to accompany her across the ocean to find her parents at the Marine Life Institute in California.

During her journey, Dory encounters other undersea creatures who assist her in her search, including Hank the octopus (Ed O’Neill) – who is actually a septapus – the whale shark Destiny (Kaitlin Olson), and the beluga whale Bailey (Ty Burrell).

Strouse’s previous writing credits are primarily in television, including episodes of Angela’s Eyes and October Road. She also wrote the screenplay for the 2002 drama New Best Friend, and is currently working on the screenplay for Disney’s Tinker Bell, a film focused on the famed fairy from Peter Pan.

Creative Screenwriting spoke to Strouse about the challenges of writing a character with memory issues, writing effective supporting characters, and the benefits of working in Pixar’s creative environment.

How did you get involved with Finding Dory?

I had written a script that was given to Andrew Stanton when he was looking for a writer. Much in the vein of how Pixar finds its writers – so I’ve been told – it wasn’t a script that had anything at all to do with animation or fish [Laughs].

You’d have to ask him, but I suppose he responded to the tone, the voice, and whatever foundation that made it a good screenplay. We met, and pretty quickly he asked me if I wanted to do it. Actually, I remember that I had to decide on the flight home, though of course I said yes!

I know Pixar is a highly collaborative environment, so how did the collaboration process work?

It was always collaborative with Andrew, but really the screenwriting was me. Of course, Andrew would do passes, and he and I would brainstorm a lot together and then we would bring it to the group of story artists. People would weigh in and share ideas.

Then once the drawing started – so to speak – things would change based on seeing things, people recording scratch and saying, “Oh, that doesn’t quite sound right,” or story artists would come up with a joke. There was a lot of back and forth, and that made the script better.

Looking back, what do you think it was about the story of Finding Nemo that made it such a huge success?

To me, Finding Nemo is a perfect movie. Of course, I can say that because I had absolutely nothing to do with it!

It probably checks every single box as a screenplay. The structure is flawless, the relationships between the characters are profound and beg for change while being sound in their own right. The characters and the character arcs are portrayed so beautifully and truthfully.

The themes are universal, but specific at the same time. To be able to see yourself in the animal world the way I think people do when they watch Finding Nemo and to have it written so true is a rare accomplishment.

On top of everything, it manages to be hilarious. It’s some of the best comedy there is, and along with the writing are the performances of Ellen DeGeneres and Albert Brooks, which are just as good as it gets.

As we know, Dory has short-term memory issues. Did that make her a challenging character to write?

It was so hard. It was the hardest thing I’ve ever done, and I think Andrew would probably second that. I had no idea when I agreed to do this how incredibly challenging it would be, and if I did I don’t know if I would have! [Laughs]

You don’t realize until you sit down to write a character who can’t remember things how integral memory is to absolutely everything we do, and that’s what creates a narrative that people can follow. When a main character can’t self-reflect and can’t tell a story, that character is very difficult to design because she can’t really lead. To get her to be able to lead and to get an audience to be able to trust her was the hardest thing to do.

For example, in Dory’s case the reason Hank exists is to be a Marlin surrogate, someone who was almost bothered by Dory so we could bring out and enhance who she is. But he is also a character who isn’t interested in her sweetness and optimism, so in a way he is as hard on her and unforgiving as the world is so she can overcome her obstacles. We had gone through versions where she was attached to other supporting characters at different times and it didn’t work because they didn’t challenge her that way.

But then you go to sort-of “supporting supporting” characters like Destiny and Bailey who also have – if you want to use the word – disabilities. That tier of supporting character can just be thematic. That’s the point of them – to highlight what the movie’s about in ways that hopefully don’t hit you over the head.

Did you have a favorite supporting character to write?

It would have to be Destiny. She just was so much fun, and actually pages and pages were written for her that never made the movie. Her part used to be bigger, and Kaitlin Olson was just phenomenal. She nailed her. At one point, Destiny was just a raging hypochondriac, and a whale shark that was constantly on the verge of panic was a tremendous joy to write.

Bailey also used to be a lot bigger in the story. His obsession with his head size was something that was really pronounced and so fun, comedically speaking. If I could do a spinoff movie, it would be about those two because they went through a lot – they had their own side-movie going.

What research did you do to ensure the Marine Life Institute would feel as authentic as possible?

We went to a few aquariums. The one that was the most influential was Monterey Bay Aquarium, which is one of the premiere aquariums in the United States, if not the world. It was incredibly informative.

That was where we first learned about octopuses in general and how amazing they are, which ended up informing the creation of Hank and his role in the movie and in Dory’s life. Obviously, their message of conservation is very strong. But it was an evolution to get to that – in the beginning, the setting was more of a theme park. I’m glad it evolved, and the movie is better for it.

Both Finding Nemo and Finding Dory are focused on the relationship between parents and children. Do you see that as an important theme of Finding Dory?

From my perspective, I was so Dory-focused that to me her parents were the point of her memories. The central relationship in the movie was the relationship between Dory and her memory, which was embodied by her parents. They were the emotional pot of gold at the end of the rainbow that she was searching for. It was vis–à–vis her inability to get them and to hold on to them.

I know people talk about family with this movie, and of course that’s such a strong theme and so much a part of it, but to me it was about the meaning of family as it pertains to memory. To me, it’s important that you even see Marlin when he’s telling stories in the beginning of the movie that he gets it completely wrong.

Yes, he mentions that there were “four sharks” during the shark encounter in the original movie.

Yes, and that was intentional. Then there are times later in the movie when Marlin says, “What did I say to her again? Tell me, what did I say to Dory that upset her?” He says he can’t remember even though he does, and he’s sort of covering over his guilt.

What was so interesting to me was how memory and family are so linked. You are who you are because of your memories of your family. You like certain things and behave certain ways because you remember how you were taught. That to me was the most interesting and untouched entry into the parent-child relationship.

You’re working with Disney writing Tinker Bell. What are the challenges of writing about such an iconic character?

It’s funny, I should probably be a little more nervous. I mean, I’m an incredibly nervous person, but when it comes to these things I tend to not feel the challenges so much in that regard. With Finding Dory, everyone was like, “Ha ha! No pressure!” But the nerd part of me makes it so exciting.

The challenges I see with Tinker Bell are making her a complex character and how to make her work within a story. They have been terrific in giving me license to figure out who she is. More than anything, that has been exciting – to give complexity to a character that I think has been seen as a sidekick in many ways, like Dory. To be able to give someone a life and voice of their own is really interesting to me.

What do you see as the advantages of working in a creative environment like Pixar?

With Pixar, it’s the time you’re given. Everyone knows the saying “Writing is rewriting.” But when you’re essentially forced to take three or three-and-a-half years to rewrite, rewrite, and rewrite, it’s almost like performing a task forensically. In a way, you become clinical about it because you’re living in slow motion.

Imagine doing a task that you love and know how to do in slow motion over and over again. It gives you an edge. At least for me, it gives you an insight that I just think no other version of writing a script could ever give you. For that, I am so grateful.

Weirdly, doing it in slow motion for three years made me a faster writer. It’s almost like athletics – you train and practice the same move over and over one thousand times so that when you do it it’s in your muscle memory in a way it never was before. I will be forever grateful to Pixar for giving me that time.