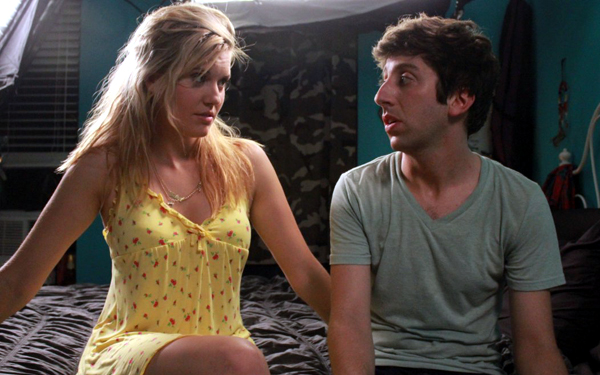 From Big Bang to Big Screen

Relationship experts say maintaining a healthy dose of mystery can be a good thing for couples. Quinn Berman, the twenty-something protagonist in the new tragic-comedy We’ll Never Have Paris, clearly missed that memo. Written by and starring Simon Helberg (The Big Bang Theory), and co-directed by Helberg and his wife Jocelyn Towne, Paris draws inspiration from this couple’s real-life rocky road towards the altar.

We first meet the nebbishy Quinn as he prepares to pop the question to long-time girlfriend Devon (New Zealander Melanie Lynskey). But Quinn’s marital trajectory is sidetracked when his leggy model friend Kelsey (Lost’s Maggie Grace), takes a sudden romantic interest in him—a shiksa fantasy too irresistible to refuse. Their ensuing tryst is as short-lived as their sex is clumsy, and it’s not long before a remorseful Quinn is chasing Devon across Paris, in a desperate bid to reclaim her. If only this effort weren’t complicated by his incessant need to confess the dirty details of his recent layover. Maybe Quinn thinks coming clean is noble. Maybe it’s self-sabotage. Then again, maybe it’s just in Quinn’s Woody Allenesque nature to overanalyze everything–regardless of the collateral damage this causes.

Helberg spoke with Creative Screenwriting about his unique art-imitates-life journey.

Simon Helberg as Quinn and Melanie Lynskey as Devon

Tell me about origin story of this film, separating out fact from fiction.

It’s based on some unfortunate events that were all my doing, and I guess, my undoing. But the majority of truth in the movie stems from my relationship with Jocelyn. Quinn flying to Paris to go after Devon, the compulsive confessional flaw he has–the skeleton is accurate. And when I did get to Paris, she had met somebody, and she was subletting that somebody’s apartment and he did play the violin. But I never met him, and it certainly never came to blows with him…And as this was all happening, believe it or not, I was taking mental notes, and sometimes actually writing stuff down, because I couldn’t believe what was going on. I don’t know if I was living it and then realized it would make a good movie, or if I was living it that way because it would make a good movie someday, but it was certainly clumsy and disastrous. It’s a moment in time when people tend to be a little more solipsistic and indulgent, and I tried to show an accurate depiction of myself–the gritty and the shitty.

You talked about being honest to a fault. Do you think it’s important to protect loved ones from hurtful details?

There’s definitely a point where you’re twisting the knife. Probably not committing the transgression is the first step. But if you do, and you say, “I had this brief thing with this girl last night, but it was just a hand job, and it was only with her left hand, and she’s right-handed,” to what end are you confessing this? I easily cleared the line of selfishness. But it’s confusing, too. A lot of people have that moment of, “Oh my god, I have this free will to start making decisions about my life, and if I get married to this person, I can see the finish line and that’s where I end up.” And then you start thinking, “Am I attracted only to this person? Have I lived enough life? If I’m not existing in an open-wound of constant vulnerability, where the highs are high and the lows are low, am I really alive?” I don’t know, maybe everybody doesn’t do that, but I think hyper-neurotic, self-aware people do, and that tends to be pretty common in that age.

Was fictionalizing these real-events fondly nostalgic or was it painful?

First of all, the part that I left out of the movie–the last and hopefully final epic fuck up, was that I started talking about our story to people in work situations. Like in meetings, I was essentially pitching the story of our breakup and proposal to these people I didn’t know, when Jocelyn hadn’t even told her parents, and some of her friends about what happened. But I knew I might have the absolute worst proposal story in history, so the competitive part of me wanted to prove that everybody had it better than I did. So I started pitching it and I ended up writing it, and when I gave it to Jocelyn, I was terrified because there were things we hadn’t talked about in a long time–maybe ever, and I was writing her voice and I thought this could be the final nail in the coffin. And she thought it was hilarious. This was the biggest test, to give it to the person who lived through all of that heartache.

Filming it was either cathartic or sadistically perverse to recreate the horrors of our breakup—in some of the actual locations. So here I am, at the Père Lachaise cemetery in France, reenacting the scene where I’m hysterically weeping to “Jocelyn”, only now she’s behind the camera actually controlling it, saying, “Grovel more! You sound too masculine! In real life, you were sobbing like a school girl.” It was definitely strange.

Talk about the division of labor, as co-directors.

When I stepped on set, my goal was to be an actor. I was in every scene, and there was a lot to say, and some of the scenes were crazy physical or emotional. So in those scenes, Jocelyn was the eyes on the set, and she’d certainly be the person to give me direction. Shamelessly. Lots of direction. I would chime in if I could help clarify what Jocelyn was trying to get at, but mostly we tried to function as one brain, because we knew exactly what we wanted, and how to get there. But I didn’t want to be acting in scenes with people and then give them a ton of direction afterwards, because that shows I’m not really in the scene with them, as an actor.

So Jocelyn was the bad cop?

(Laughs) Yeah, she’d walk away, and I’d be like, “Can you believe the balls on that woman?” No, she was great. And there were times when we couldn’t fit her on set because we’d be shooting in Brooklyn in these tiny apartments, so she’d literally be three stories down, watching us on a monitor, and the A.D. would be standing there, and Jocelyn’s voice would come over his walkie-talkie–this little black box of criticism and judgment. The A.D. would yell “cut”, and I’d hear Jocelyn say “Take me to Simon.” And he’d hand me the walkie, and she’d say, “You look kind of cross-eyed in that last take.” She might have been messing with me, but it was honestly one of the hardest things either of us has ever done.

She’s somebody that we have actually known, who actually knew a little bit about the real-life breakup. But we also know her as an actress and she’s fantastic. We wanted her to be the kind of girl everybody is in love with, but everyone thinks they’re the only one. She should be somebody maternal. She coddles [Quinn] and allows for his shortcomings, and possibly enables them. And with Melanie, you do just fall in love with her as soon as you see her–in life, but also on screen. She’s got this quality that’s so genuine and unassuming.

She was somebody we did not know at all, who wasn’t entangled in our past in any way. We were just lucky to get her the script. And we talked and we were totally blown away by her take on [her character]. She’s incredibly articulate and smart and understood that we didn’t want this character to be played as a femme fatale, or as a villainess or, the man-stealing ditzy blond girl. That was never the intention for that character, and it could have gone that way.

I think she made her character someone you sympathize with, in a way.

Yeah. She’s not really doing anything wrong, and certainly not in comparison to what my character is doing. We thought it would be fun for them to have almost like a brother/sister thing. She’s kind of a tomboy, but then out of nowhere, this sort of romantic element comes in when she realizes she might lose her friend because he’s getting married. Does she really love him? I don’t know. Then you start thinking maybe there’s a screw loose—the length she goes to. But to me, these people are sort of lost, trying to nail down their futures–really quickly, in some cases.

Talk about Zachary Quinto’s character Jameson, who was constantly busying himself—corning his own beef, or building a Lego man on a camel, etc. Were all these idiosyncratic hobbies written into the script?

They were all scripted…I wanted Jameson to be this kind of misguided, distracted, A.D.D., sage-like millennial bohemian. That’s a lot of adjectives. But a guy who’s sort of a dilettante, with interests in everything. He’s wearing the pants he got in Morocco on his way to Jerusalem, via the Panama Canal. He had a lot of gadgets and things in front of him. There’s so many people now in my generation, who are so into artisanal things—that are interested in where your coffee beans are picked, how they’re ground, how long your salami was cured, how you pickled that cornichon, and where you got that vinegar…and I don’t think it’s bad. I’m not judging it. I think Quinn and Jameson were probably good pals, but Jameson wouldn’t even notice Quinn was there until Quinn was saying, “All right, I’m leaving”. And then he’d say something trite–but heartfelt.

This film was a clear comedy. Was it an organic process to incorporate punchlines while also driving a larger story arc forward?

I wanted everything to be grounded in reality and truth, and you’d think half the work would be done because I did live a lot of this. But you still have to craft a story, and life doesn’t unfold perfectly in a three-act structure. Thank god, because it would be so predictable. There were times where I knew there should be a joke and it took a long time to figure out what it should be. Other times, I thought I was writing something pretty straight, then I see it with an audience and some of the bigger laughs were moments I didn’t even think were that funny. My favorite funny moments are where you understand these characters and you’re in sync with their situation. Then there’s hopefully a couple of shamelessly ripped-off Peter Sellers/Woody Allen sight gags. The humor is not always incredibly witty or high-brow. Sometimes it comes from a dick joke.