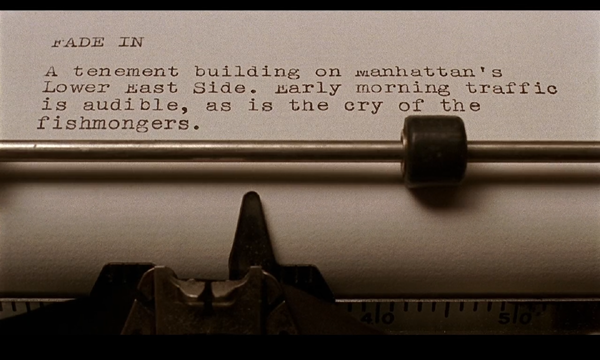 From the Over Describer to the Compulsive Recapper: Eight Screenwriting Screw-ups to Avoid

Many of the most common mistakes found in screenplays are also easy to rectify. So if you are working on a screenplay of your own, make sure that you do not fall into one of these types.

We see an eyeball staring directly at us.

The Issue:  Let us not forget that a screenplay is a blueprint for a motion picture. Hence, the fact that “we see” everything you are describing is rather a given, is it not?

The Fix: Do a document search for “we see,” and delete every one of them. With each deletion, reread the sentence and, to your never-ending joy, discover that not only does the sentence read fine without it, it also, ironically, makes for a more effective cinematic reading experience.  (“An eyeball staring directly at us.”  A declarative and evocative sentence that will never again cry out for a “we see.”)

The Issue: Characters who blurt out detailed rundowns of everything that has already been depicted visually prior to the scene in question.

The Fix: When entering your scene, always be mindful of what you have already told us. If it’s happened, it does not need to be elaborated upon further. There are certain exceptions to this rule, such as mysteries in which key facts can be helpful when restated in seamless ways, but for the most part “show don’t tell” applies here.

3. The User of the Newscaster

A wrongly-accused man is on the run, ducks into a corner bar and there on the screen above the bartender’s head is everything the man needs to know about what the authorities know so far and how it affects his predicament.

The Issue: When strapped for a way to catch the audience up on some exposition, a character in your story turns on the news at the exact moment a news anchor is bringing us up to speed on what’s happening.

The Fix: You’re a writer. Find another way to let us know the severity of your character’s situation without resorting to a handy, overused device. (Unless you are going to turn the technique into a virtual wallpapering of thematic underpinnings, as was recently achieved in Gone Girl.)  If you know the world of your story, you can find visual shorthand, a supporting character or even a desperate monologue from your protagonist to more convincingly tell us what’s at stake.

Not your job! Director J. J. Abrams on the set of Star Trek

CAMERA SPINS AROUND PETE as he comes to the dawning realization that he has been set up. He moves slowly, deliberately, almost like a man afraid of being discovered even though there is no one there to discover him. To his left, an antique desk, its scuffed mahogany echoing the scratches marring his soul. To his right, the scarf that will soon prove his undoing: green, with flecks of gold, its retro, artfully brushed depiction of a Kipling-esque elephant seems to mock his attempts to assert control over his own reality.

The Issue: You’re worried that they won’t let you direct your deeply personal independent vision, so you take it upon yourself to tell the reader how  you would direct it.

The Fix: Lose the camera direction, lose the symbolism, lose the colorful descriptions of the props. The director, the cinematographer and the production designer will decide how your scene looks. “Pete, all alone now, comes to the dawning realization he has been set up. The dead woman’s scarf is on the floor beside him.”  Thanks, we got it, nicely done!

Dan looks around, and seas Beth standing with her arm’s crossed, scowling and taping her foot for affect. “Its time to loose the attitude,” he tells her. “Their not coming. Your definately better off with me.”

The Issue: You write “its” when you mean “it’s” and “your” when you mean “you’re” and “peddle” when you mean “pedal.”  You have no idea how many script readers  (themselves often fairly well-read, hence their job titles) are waiting to ding you on stuff like this. If there are enough typos and poor grammar, it will have an impact on how the reader perceives your ability to tell a story.

The Fix: It’s okay if you are a gifted writer but just can’t get it together to be good with grammar and spelling—this is a visual medium and you can express your genius appropriate to the storytelling. But scripts need to be read first, and spell-check is not going to cut it. If you do not feel capable of taking the fine-toothed comb to your work, hire a proofreader. It will be money very well spent.

For a good starting point, go to the Oatmeal’s Ten Words You Need to Stop Misspelling http://theoatmeal.com/comics/misspelling and branch outward from there.

Tim Blake Nelson as Anse in  As I Lay Dying

“Well now, y’all might be raught about that, but I’d bet my lahyeff that y’all are takin’ me for a rahd.”

The Issue: In order to convey your deep knowledge of regional speech patterns, you write them out phonetically in your dialogue. Perhaps the American South (as shown above) is the accent that most becomes the unwilling subject of the screenwriter’s over-specificity, but any ethnic group can fall victim to a writer’s unfortunate tendency to spell it out for the reader.

The Fix: If you need to let us know that your character speaks with a certain kind of identifiable accent, simply indicate it when the charater is introduced Then, write normal old dialogue and let the actor play around with when to elongate or stress a syllable. Trying to figure out what to say based on your mind-bending pronunciations will only leave an actor frustrated, tongue tied, and cursing your phonetically-charged name.

Ursula Andress as Honey Ryder in Dr No

MATT, 40s, looks like he walked out of a Hemingway novel; aloof, with a three-day growth of beard and a quiet intensity that hints at a great loss with which he has not yet come to terms. JULIE, 30s, is drop dead gorgeous.

The Issue: You lavish all your intense, inward character descriptions onto the men in your script, while the women are reduced to what they look like.

The Fix: Do we really need to tell you how to fix this one? Give everybody in your script some dimension. Actors want to play interesting people, and actors are the people who can help get your movie made.

8. The Cavalier User of Intellectual Property

Brian’s room is awash in movie and Marvel Comics posters. Wolverine and Nick Fury adorn the walls. There’s Indiana Jones, and over there is Luke Skywalker.  As he rushes to get ready for school, a mash-up of The Beatles’ “Revolution” and Adele’s “Rolling in the Deep” blares.

The Issue: You top load your screenplay with its soundtrack and pop culture references before you have any idea whether or not the script can be made, let alone whether or not its producers can afford the clearances on your very specific choices. The budget of your as-yet unmade masterpiece just went up by half a million dollars in royalty payments.

The Fix: If you must include music or pop culture references (and they can sometimes add some zip to your proceedings) be general, not specific. “A wall full of fan boy posters.” “Loud hip hop blares.” If you have your heart set on a song that you think is the most perfect commentary on the thematic throughline of your story, use it once and only once, and preface it with the word “ideally.”  For example, “Brian tools down the highway as the song that represents his very soul blasts from his dashboard iPod (ideally “Champagne Supernova” by Oasis).

Feel free to comment on this article, and contribute your own additions to the annals of screenwriting screw-ups. We can’t possibly have found them all!