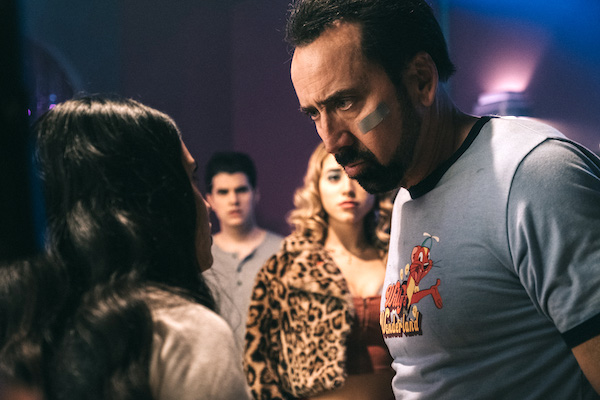 Watch out for the possessed animatronics in Willy’s Wonderland. Don’t be fooled by their playful birthday songs or their cute faces. They’re really scary

G.O. Parsons began his writing career as a playwright before transitioning to screenwriting. “A friend told me that it didn’t matter how great a play was, it only lasted an hour or two, and it didn’t exist after that.” The advice being that if he wanted a writing career in Hollywood, he’d have to write a screenplay. Preferably one that was shot. The rest is history.

The process began with the decision to write a horror movie which Parsons considered to be the easiest path to a movie people would be interested in. His background in playwriting disciplined him in telling stories in one location. So he decided on a children’s theme park called Willy’s Wonderland.

The next step to writing a screenplay was to consider the greatest films of all time. “Star Wars has Luke Skywalker and Darth Vader. You have a hero and and a better villain.” So Parsons chose the Janitor (Nicolas Cage) as his hero and Willy (Jiri Stanek) and the animatronics as the villains. Stage two complete.

In the next stage of his story construction, the screenwriter considered how to turn the genre onto its head to get him noticed by the industry. “In a typical horror film, the villains mess with the wrong person that will make the audience perk up. We’ve seen zombies, haunted houses, and vampires, but we haven’t seen evil, possessed animatronics before.”

G.O. Parsons was ready to write a screenplay that was absurd, insane, and fun.

Apart from them not being done to death in movies, animatronics were visually-engaging and Parsons thought it would be fun to watch the Janitor fight them. In terms of cinematic inspirations, Parsons referenced the great B-horror movies of the nineties, including Jack Frost, Gingerbread Man, Demonic Toys, and Puppet Master to shape his story.

The screenwriter also cited the found footage film Bad Ben directed by Nigel Bach. The day before shooting was about to start, Bach’s crew quit. Rather than abandoning the project, he shot the film on his phone on a s shoestring budget. Although not the same style of horror as Willy’s Wonderland, Bach’s determination inspired the writer to bring his film to life. “At some point I thought I’m not going to care what anybody thought. I hit rock bottom trying to break in and my only option was to write my way out.” The results of his efforts are self-evident.

As has been noted in many examples, many screenwriters cut their teeth writing plays early in their careers. It formed an essential part of their training as storytellers. “A playwright has to drive the story with character and dialog.” If Parsons wrote an action movie, the could conceivably write four pages of action with things blowing up without any dialog or character development. “You don’t have that free passage in a play. You have to capture your audience’s attention just with your words.”

Parsons continued that in playwriting, you have to meet the characters very early on know who they are. You learn their backstories through dialogue rather than visual action.

Willy’s Wonderland began its life as a proof of concept film featuring G.O. Parsons fighting an animatronic ostrich. It caught the eye of Kailey Marsh from the Bloodlist who requested the script. This event changed the course of events. The screenplay found its way to Nicolas Cage who was immediately interested in playing role of the Janitor.

We asked Parsons, what attracted Cage to his script. “Nicolas plays in many films with a lot of dialogue and crazy long monologues. In Willy’s Wonderland, he has minimal dialogue. He had to channel all his emotions and character into a look or a gesture.” The minimalist approach added to the appeal of his character.

One might have thought that the original eight animatronics might have to be reduced in number to allay budgetary constraints. Curiously, the total number of animals remained the same, but some of the animals changed. “Cage loves reptiles and amphibians so he changed a dog to an alligator, a rabbit to a chameleon, and a penguin to a turtle.”

Parsons deliberately chose not to give the Janitor a name. In his screenplay he writes, “The Janitor has a name, but you’ll never know it.” On set, Cage did the same. He really was the Man With No Name who enters a small town with no apparent history.

G.O. relished this approach because it gave the character the greatest amount of mystery and intrigue. This encouraged the audience to attempt to uncover the character’s backstory. In the absence of one, they will make it up. “Maybe they’ll be right. Maybe they’ll be wrong.” But they will engage with the bareness and space in the film.

G.O. always imagined the Janitor as closely reflecting himself. The animatronics are a metaphor for the Hollywood gatekeepers. Keep fighting no matter what.

The simplicity of the movie’s premise is pivotal. The Janitor needs his car fixed and must clean Willy’s Wonderland in order to pay for it. An honest night’s work for an honest night’s pay. He takes his scheduled soda breaks and gets the theme park cleaned up for a possible reopening.

The pesky kids in the movie were more than sacrificial lambs in Willy’s Wonderland. You can’t have a body count without bodies. Parsons paid homage to their ‘cliché-ness’ and made them the fodder to demonstrate how dangerous the animatronics were.

The animatronics have their own demonic mythology which was drip fed to the audience in two parts.

The kids who wanted to burn the place down told the Janitor the first part of their history. The second part of the exposition was given by Sheriff Lund (Beth Grant) and her Deputy Evan (David Sheftell). The animatronics perform a ritual sacrifice and contra-transferred their consciousness into another living thing (a nod to Star Trek).

Parsons has a uniquely vivid writing style with notes in the action lines. “It’s hyper-stylized and it’s personal. I like to talk directly to the reader.” Screenwriters are artists so they can choose their brand of flair in their scripts.