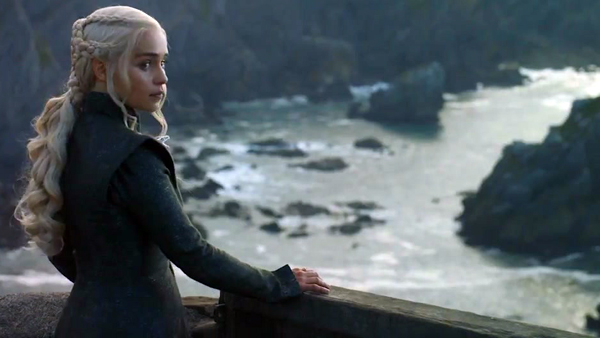 A 73 Hour Movie: David Benioff and D.B. Weiss on Game of Thrones

Surely few people on the planet have not heard of Game of Thrones, the award-winning show based on George R.R. Martin’s best-selling books.

To date the series has received 38 Primetime Emmy Awards, including “Outstanding Drama Series” in 2015 and 2016.

Speaking at the 2017 SXSW panel moderated by Sophie Turner (Sansa Stark) and Maisie Williams (Arya Stark), showrunners David Benioff and Daniel “D.B.” Weiss talked about writing the record-breaking show, creating characters who resonate, and the portrayal of women on television.

Who was the first actor to be cast?

Benioff: Peter Dinklage (Tyrion Lannister) definitely said yes first. The only two people that we knew we wanted were Peter and John (Bradley who plays Samwell Tarly). Those two were easy.

I think casting the Starks were tough ones, particularly because they started so young. But we knew that if we kept going, if the show endured for a couple of years, it was going to an extremely dark place. So it was tricky casting people and hoping that they would blossom into the women that they’ve become.

Then we were sitting in this hotel lobby—-like the one place that we could get wireless—and we’re looking at the casting videos and there was a little thumbnail of Maisie Williams. It was just something about that little tiny thumbnail face that just seemed right—it seemed ‘Arya-ish.’ It looked like she was seven, but she was 12 years old going on seven.

So we clicked on the audition video and we had to wait about 40 minutes for it download, and we finally saw her first audition for it and she was fucking awesome. So we met her in London, she read again, and she remained awesome.

Can you recall any funny stories during the pilot shoot?

Benioff: There’s a scene in the pilot that’s probably the worst scene we’ve ever written. The Stark boys, Jon Snow (Kit Harrington) and Theon “Reek” Greyjoy (Alfie Allen) are all shaving each other. They’re getting their hair cut by Tommy Dunne (weapons master and cameo barber).

It’s a really weird scene; they’re all shirtless. They’re all standing around and if you look closely you can see that they’re all flexing, because they’re shirtless and they all want to flex their abs.

Weiss: They were all just sitting there doing crunches all day.

Williams: Talk about your writing process.

Benioff: We have two other writers on the staff that we work closely with, Bryan Cogman and Dave Hill. The four of us get together in a room and we kind of break down the upcoming season, then we split up and write different sections of the outline.

This is the last one we’ll ever do, which is kind of sad. We have a 140-page outline—but it’s only going to be six episodes for this final season. We divvy up the episodes—Dave Hill will write the season premiere, Bryan will write episode two, and then Dan and I will write the other four.

Weiss: Usually it took two minutes to divide the halves. This time it took eighteen emails back and forth about “you take that scene and I’ll take this scene,” when we realized this was actually the last time we were going to be doing this.

Weiss: You want to know?

Benioff: But you guys can’t tell anybody…

Weiss: Should we just tell everybody now? Then we don’t have to do all the work. It’s a lot of work. We get like 300 shooting days. We could just throw all that away and just tell people what happens.

Talk about why Game of Thrones characters resonate so much.

Benioff: It’s different for every character. There’s something about Arya; Arya is a rebel, and people are drawn to people who rebel against whatever the societal strictures are, so that one makes sense.

For me, to be honest, even in the book readers would always hate Sansa, and I always loved her because to me she always seemed like a real person. She can be really annoying sometimes, she’s like a stuck up teenager sometimes, but a lot of us were annoying teenagers at some point.

She just seems really believable, and also she goes on one of the most interesting journeys, because she doesn’t start out as someone who is sharp, and shrewd and tough, but she becomes that person.

Arya is kind of always there—which is what’s great about Arya—but Sansa had to get there by painful experiences. She’s always been one of my favorite characters.

Weiss: In a way, Sansa has to face harder choices. Arya always has a pretty clear path, like: “What’s a cool, badass thing to do and I’m going to do that thing.”

Sansa’s choices in a way feel more real, and maybe resonate with people. She says, “This is not any easy decision I have to make here, and any decision that I have to make will have difficult or negative consequences, and I’m going to own the choices that I make.”

How difficult is it for you to say goodbye to characters? Has there ever been a time when you’ve written a death scene for someone and then taken that scene out and moved it to the next season?

Weiss: That did actually happen. Noah Taylor (Locke) was on the show in season three, and played a death scene where Nikolaj (Coster-Waldau who plays Jamie Lannister) was supposed to throw Noah Taylor’s character into the bear pit. We decided after working with Noah and hanging out with him for a while that he should stay on. We realized that he was just was too much fun to waste, so we kept him alive.

It hasn’t happened that often.

Benioff: Killing Momoa was another one. Jason (Momoa who played the character Khal Drogo) was great, but there was just no way of getting around killing him if we followed the books. Jason was just so fun. Jason played his part just larger than life, bigger than we figured, so we never truly recovered from getting rid of him.

What impact do you think Game of Thrones has had on the portrayal of women on TV?

Weiss: When we initially read the books, we realized that it’s an awful world that the story takes place in. But there were compelling female characters who had agency, and who were out there. They weren’t secondary to anybody; they weren’t somebody’s right hand, woman or wife. They were out there and they had their own storylines, more than in any show we’d ever seen.

This seemed like a very actress-centric show before we even started. That was a fun thing for us to explore and work on together.

Benioff: I guess I’m just happy that we managed to somehow keep everyone together. I mean it’s hard enough in a series for any length of time to keep a cast together—especially for us because we have such a huge cast, and we haven’t really lost anybody.

We’ve had this sense from the first time we pitched the show to HBO that we wanted basically to tell a 70-hour movie. Actually it’s going to turn out to be 73 hours, but still it’s stayed relatively the same in terms of a beginning, a middle and now we’re coming to the end.

It would have been really tough if we had lost any of the core cast members along the way. So I’m very happy that we’ve kept everyone together and we get to finish the way we want.

How do you keep the show’s spoiler leaks to a minimum?

Weiss: So what chance do we have?

Benioff: I’m the kind of viewer or reader who just doesn’t want to know about stuff, so it’s always weird to me that people want to find out spoilers. I understand that it’s curiosity, but I’m not someone who reads the last page of a book first just because I might die before I finish. I want to be surprised by things.

So I just kind of go with the assumption that a lot more people are like me, and people who are desperate to find out everything beforehand are probably going to find a way to do it.

What kinds of projects would you like to do after Game of Thrones?

Weiss: I’ve got this project that I’ve been planning called “sitting in a cool dark room for two months.”

Are you going to continue writing together?

Benioff: We talked about this when we had dinner together last night, and we decided that when this is over that we should all go do different things. Because there’s always going to be this temptation to keep doing it, to do like the spinoff show, or do the sequel.

I think that HBO might well do one, and I am looking forward to watching it and I think it will be great. But it’s better for them to get new blood in.