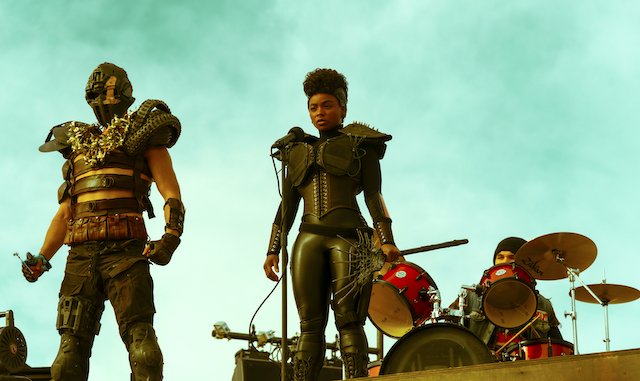 Aron Eli Coleite describes himself as a “classic nerd.” Since the age of 11, he’s been going to the comic book store each week when new issues come out, and he grew up digesting comics, film, and television.

“I knew it was what I wanted to do. My parents did a good job raising me but the TV also did a good job corrupting my mind with all manner of delightful genre storytelling that I fell in love with. I just knew I wanted to be a part of it,” he said.

Stepping into the fandom he so adored, the screenwriter started with Crossing Jordan, but then moved into writing the series Heroes which was one of the first hero-centric genre series. In 2017, he got the chance to work on Star Trek: Discovery, and now he’s the creator and writer on Netflix’s new multi-genre series, Daybreak.

Described as an apocalyptic dramedy, Daybreak is about a high school outcast named Josh who is searching for his missing girlfriend in post-apocalyptic Glendale. The series stars Colin Ford as Josh Wheeler, along with Matthew Broderick as Michaell Burr.

The showrunner wanted to “build the biggest sandbox,” so all of the stories could mix together and play off one another. “I was an assistant for a long-time, where I got to work with amazing writers, and I knew long-form storytelling and arcing characters could give you an emotional experience.”

While working on the TV series Crossing Jordan Coleite was known as the “nerd in the office who would go to the comic book store every week.” So when writer Tim Kring had an idea for a superhero show, he brought in Coleite to discuss the idea. “There was this wonderful renaissance of everything I loved growing up was becoming mainstream.”

The screenwriter gives Lost credit for priming the television audience to like the genre before they even knew what it was. Heroes hit the air in 2006 and then two years later, The Dark Knight and Iron Man took theaters by storm.

In world-building and genre creation though, it’s still crucial to establish the rules of the world or universe so audiences know what to expect from a series or movie. “I’m a big stickler for the rules, but I also like to bend the rules a little to make [stories] unique and interesting. It’s not about re-inventing the wheel, but turning the wheel a little to the left or right to create a unique perspective.”

On Daybreak, for example, the show isn’t a typical genre TV show, but that doesn’t mean they can’t play with the rules of the zombie genre. “We have accepted rules of zombie lore, but why are those the rules when zombies or mutants have so much more to explore. The other part of that is that all of our characters are the stars of their own movies.”

“I believe everyone is in a very different movie,” said Coleite about his characters as well as individuals in the world. “One character might be in Ferris Bueller’s Day Off or some other John Hughes movie, someone else is in Seven Samurai, and that speaks to the individual of all of us.”

“We have different tastes, but we exist in the same universe. This was an opportunity to explore characters in unique narratives because I love Samurai Jack and Conan the Barbarian, but I don’t want to not be able to do it, because my show is perceived as one thing. I want a sandbox to create all kinds of stories that fit in one universe.”

“When you have specific characters with real-defined arcs and desires, you can change the narrative structure, drive, tone, and approach. If we’re true to character, we can tell their story in a unique style without giving the audience whiplash.”

The key to this mixture is really the handoff. Colin Ford’s character Josh Wheeler lives in a Ferris Bueller–type of world where he breaks the fourth wall to interact with the audience in a playful manner, but when Alyvia Alyn Lind’s character Angelica Green takes over, she showcases her non-filtered pyromaniac style.

She takes Josh’s fourth wall perspective and then says she won’t continue to narrate to the camera, but would rather showcase her view in a voiceover, which is along the lines of Goodfellas and Apocalypse Now. Then, her voiceover details her story in a Scorsese-style.

“I feel the audience is so genre literate and aware of tropes, so I wanted to make something to say we’re all speaking the same language, so let’s talk about the way we tell stories, use conventions, and self-acknowledge the audience in the discussion, which is very exciting for me to be able to do.”

In today’s pop culture world, writers assume some people will get the references while others will not, but shows like Daybreak are meant to entertain everybody. “I like issuing a challenge to the audience. If you don’t get the reference, go find it. Everything we’re referencing is really awesome. The homage is amazing.”

“It’s a feeling I felt when Tarantino would do homage. I wanted to do a deeper dive on what influenced him to make those things. You’re allowed to do that now in a way that you don’t even have to go to film school. We’re all just stealing from each other. We’re all influenced by what came before us. We’re just trying to put it through a lens to make it unique in a new way. It’s important to acknowledge what we’re influenced by and show it in a new lens. But, whether you get it or not, there’s still meaning in the narrative.”

Pitching a show like this is a little complex, but the TV series remained pretty close to the pitch. “What you want in any endeavor is that you’re all making the same show. It’s so critical that the studios, the network, your creator partners, the actors, the studio head, are all rowing in the same direction. When you have something that’s not cohesive, or if somebody things you’re making something different, that’s when things fall apart. You need a cohesive roadmap.”

“We see so many zombie apocalypses that are places you don’t want to be in. They seem very smelly. This character [in Daybreak] looked at the universe as, ‘This is the best thing to ever happen to me.’ That was so fresh and relatable. I love The Walking Dead and it does a perfect job at the horror element, so we wanted to do something different in the same setting.”

“High School was the best and worst time of my life and I found myself wanting the world to end so I could reinvent myself and that’s not a unique thought.” Citing a favorite movie from his childhood, the screenwriter said he was always fascinated with wish-fulfillment from the movie, Night of the Comet.

“What would kids do if there were no adults? I don’t think it’s all Lord of the Flies. Taking that as a starting point and making a fun apocalypse movie based on wish fulfillment and optimism, we could have the kids make dumb choices, but put the world together in the way they wanted to do it.”

“Surviving high school is like surviving the apocalypse, and it takes your group of friends to survive. That theme about a tribe brought everything together. That’s when people got excited about the series and I think that’s what we delivered on. Then we talked about character, plot points because of character, and not just plot points for convenience.”